EngageSportMode is already a big fan of the Audi RS 4, naming it one of our top five estate cars back in September last year. There was, however, the feeling that Audi’s RS models had all become a little bit too grown up and sensible when it comes to colour choices. No old skool Imola Yellow, Papaya Orange or even Sprint Blue from the previous generation. Fortunately, Audi has seen fit to rectify that a little, bringing back the classic Nogaro Blue for a special commemorative edition:

If you’re not sure what that old boxy estate car on Porsche-style wheels next to the RS 4 is, then you need a swift lesson in the Audi RS backstory. The car on the left is the genesis of fast Audi models; the RS 2. Developed with Porsche – the 17″ wheels are actual Porsche items, as are the brakes – the RS 2 was the first seriously quick Audi road car, and built on the foundations of the existing S2 Avant. The 2.2-litre five-cylinder engine was modified to give 311 hp by way of a larger turbocharger, higher boost pressure and better cooling meaning 0-62 mph in 5.4 seconds and a top speed of 162 mph. Not bad for 1994. Modifications continued with stiffened and lowered suspension, a new six-speed manual gearbox and a locking rear differential. 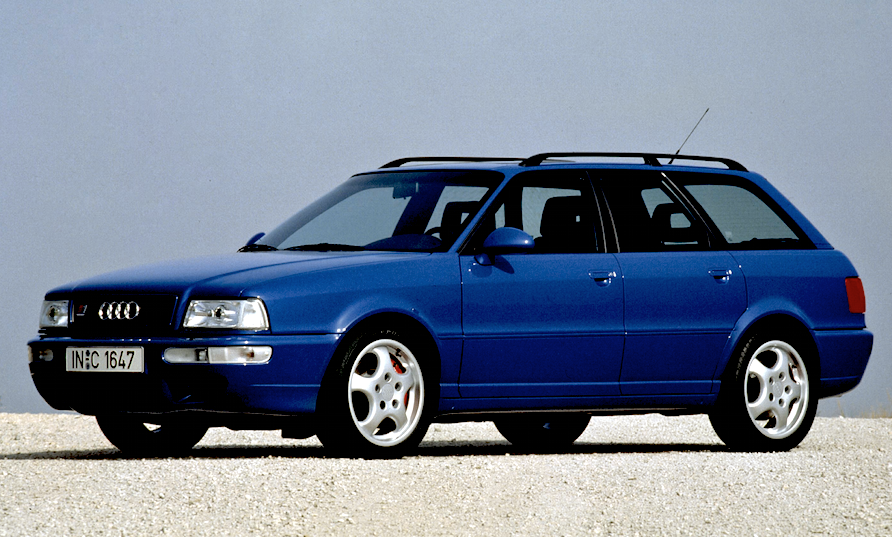 Just as important as the internal changes was the outside. A front bumper mimicking the contemporary Porsche 911 Turbo was fitted, along with wing mirrors lifted straight from the rear-engined sports car. A new black grille at the front and 911 style full-width light band at the rear completed the changes over the regular S2. Oh, and then there was the colour; Nogaro Blue. Named after the French race circuit where Audi took two victories in the 1993 French Touring Car Championship, with Frank Biela driving the Audi 80 quattro, Nogaro Blue was an exclusive option for the RS2. The colour continued inside, with the electrically adjustable Recaro seats available with Alcantara sections finished in the bespoke bleu.

Fast forward 20 years from the inception of the RS 2, and Audi has decided to pay homage to it with a special edition of the latest RS 4 Avant; by painting it Nogaro Blue. Mechanically unchanged from the regular RS 4, the Nogaro selection is finished in that blue pearlescent paintwork with high gloss black window surrounds and exhaust trims, with the roof rails in matt black. Naturally, the front grille is also painted black. The 20″ gloss finish wheels in a 5-V-spoke design hide red-painted brake calipers bearing RS emblems, again reminiscent of the RS2.

On the inside the Nogaro selection features electrically adjustable sport seats, with the option to have them finished in leather with Nogaro blue Alcantara inserts. Blue contrasting stitching features on the arm rests, steering wheel and gear lever gaiter too. Finally special logos on the door sills and on the gear knob mark this out as a special edition.

Whilst it may be unchanged under the hood, the RS 4 Nogaro still packs a naturally aspirated 4.2 litre V8 with 444bhp and 317lb ft. That’s good for 0-62 mph in 4.7 seconds and a, limited, top speed of 174 mph via the S tronic dual-clutch gearbox and quattro all-wheel-drive. In itself, the performance stats show obvious progress across the last two decades, but just as considerable is the claimed official 26 mpg fuel consumption; something the RS 2 would never have achieved.

Audi UK is still said to be deliberating over whether to offer the Nogaro selection here. However, ESM would think anyone who makes the right noises with their friendly local dealership could persuade at least one to come off the line in right hand drive. Deliveries are due to start early this year, with an official launch at the Geneva Motor Show in March.