The Tesla Model S is kind of a big deal. No, scrap that, it’s a massive deal. We’ve heard from The Tame Geek when he drove one, but what is it like to be a passenger in the fastest four-door in the world? Ned found out.

[Just a small disclaimer before I start the article, due to my age, I haven’t actually physically driven the car myself. I did, however, have a ride in the back, and this is my review from that perspective. Enjoy.]

2.8 seconds – that’s about the time it takes for you to decide whether or not you want to continue reading this article. Hopefully, it’s the former. But if you were in a Tesla P90D – with Ludicrous Mode – 2.8 seconds is the time it takes to blow your mind. Why? Because this 2.2-tonne family saloon can out-accelerate a Porsche 911 Turbo, that’s why! So in case you haven’t already guessed, 2.8 seconds is the 0-60mph time. Now, the way this thing looks.

The Model S came out in 2012, yet in the Spring of this year, we saw it oust its cocoon and flourish into quite a handsome brute. The combination of the long sloping roof line and powerful stance make spotting one on the roads an occasion. What’s more, the new eyelash-shaped wrap around headlights make it yet more menacing in the dark. Overall the Model S manages to mix a little bit of the future with much of the present. So even in 10 years time, I can’t imagine it looking dated.

With it being “the car of the future” and all, the Model S is inevitably a tech fest, and the whole car is adorned with little flourishes that do more that just please the eye. Those devilish lights, for example, are now full-LED and fully adaptive. The air suspension is fully adjustable too and, with the help of GPS mapping, the Model S will track where you’ve altered the suspension so that next time it can automatically do it for you.

Another feature worth mentioning is the door handles, They’re big chrome fittings; the kind of thing you would expect to find in a swanky ultra-modern hotel. But they don’t offer a sturdy mechanical pull like you get with a German luxury car. Yet, once on the move, they seamlessly glide into the bodywork leaving a flush, streamlined view in the side mirrors. So I think they can be forgiven.

On the inside, Tesla’s design language flows through. There’s a giant iPad-like screen on the dash which controls absolutely everything, some clean lines, clever storage solutions and ambient lighting. The biggest thing you notice, though, is the floor. It’s high, very high. So much so, that, in combination with the sloping roof line, it means that anyone over 6 ft will be sitting with their knees up by their ears. That said, the Model S is a family car, and for kids, the room is more than adequate. Better still, with the tick of an option box, you can get an extra two rear facing seats in the boot. They’re only suitable for small children mind. I suppose it’s so your children can sarcastically wave at angry Porsche drivers whilst you leave them for dust.

When travelling in the Model S, it’s perhaps not as quiet as you would expect it to be. Sure there’s no engine noise, but the combination of the aircon fan and tyre rumble (the car I went in had optional low profile tyres which are partly to blame), mean that the back of the Model S is no different to any equivalent petrol or diesel car. In fact, compared to the Model S, my ride in a diesel Audi felt like a sensory deprivation chamber.

At low speeds, however, with everything off, the Tesla does become an eerie waft machine. What makes it even eerier still, is the Autopilot mode. Get it on the motorway and, at the flick of a switch, the car will drive itself. Now I don’t just mean radar guided cruise control, the Autopilot system can actually stop-start and steer all without human input. Whilst it is possible to take your hands off the wheel for a short time, its best to keep them there should you need to take control. Although this is not a fully self-driving car, it is a first step towards an autonomous future. 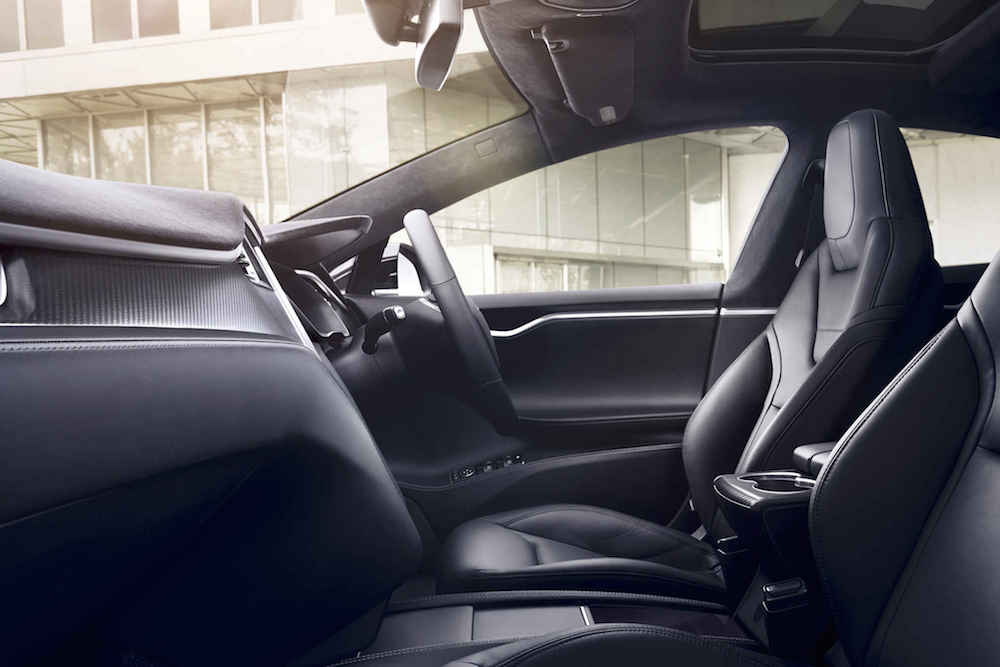 Now I could go on about the little niggles I found with the car, like how when you shut the door it doesn’t sound like a Golf. Or that the “Nappa leather” doesn’t feel the same as in an Audi or BMW.But this is the quickest saloon car on earth! So I’ll just skip to the bit you want to read about instead – performance.

The P90D has an electric motor on each axle, with 259bhp on the front and 503 in the back. This means both all-wheel drive, and a combined output of 762bhp. An interesting recipe to say the least.

In a world where turbocharging is becoming common practice, the word ‘lag’ is more and more prominent. With the P90D, on the other hand, the only lag is the time it takes for the driver to bury his right foot into the carpet. The response is, as you might have guessed, electric. The eruption of torque is enough to drop to kick you into the next century. And with this kind of performance you might as well be. A 0-60mph launch of the traffic lights is best described as a jump into hyperspace. Watching the little specks in the mirror, which were once cars, disappear out of view is amusing to say the least.

The Model S is a true feat of engineering, and will no doubt go down in the history books. But the most important thing about the Model S is the way it puts a smile on your face.

So most of all, once all the oil wells have run dry and petrol-powered cars are obsolete, speed freaks will still have some solace.