Yeah, 2016 probably won’t go down as a vintage year in terms of global politics and current affairs. However, when it comes to new cars, it’s most certainly been a classic! As the man who has covered the biggest new releases for ESM this year, our man Ned Jasper picks his top seven.

Well, here it is. Christmas time 2016. That means festive tunes fill the airwaves, trees go up and presents are bought. That also means that it’s nearly the end of 2016. So let’s take a look back at some of the greatest new cars to come out this year. This is ESM’s top five new cars of 2016. Actually, it’s not. There were so many good contenders this year that we stretched it to seven! Yes, yes, I know I said that last year as well, but this year we really have had some rather special cars released. Here they are:

I know what you’re thinking. Great intro, best cars of 2016, and now I’m presenting you with a Porsche Boxster. What is going on? I had my reservations about this one too. This is the baby Porsche, only with fewer cylinders and a turbocharger. Not really a recipe for success is it? However, it’s been 11 months since this little gem was released and, I must say, it’s grown on me.

First, let’s talk about the heart of this little orange and black tiger. It’s down two cylinders from the previous model, but it’s up one turbo and a whole heap of power. What’s more, the Boxster S has a variable vane turbo – not necessarily something you would expect to find from this class of car.

So what about the rest of it? Underneath we have the same mid-engined, rear-wheel drive, sports car with a manual gearbox (PDK is available, too) that’s been entertaining drivers for nearly two decades. Despite the engine alterations, the recipe remains unchanged with superb handling and excellent composure. Only this time with a little more grunt. Well worthy of the number 7 spot. 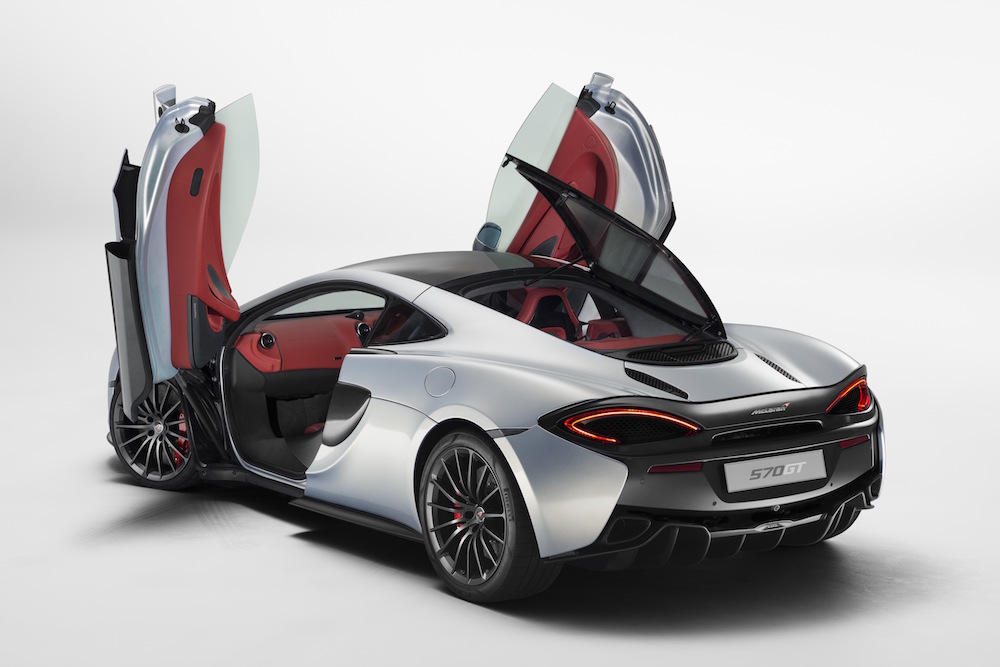 You would think that with 562bhp, and a top speed of 204mph, the 570GT would undoubtedly be the fastest hatchback in the world. The thing is, it’s not even the fastest hatchback on this list – told you it was a good year! What the 570GT is, though, is a remarkable piece of British engineering. Not only is it a comfortable, usable supercar, it’s also stunningly good to look at, and actually practical.

First, the looks: unlike the other cars in the McLaren range, the 570GT is a little more mature. There’s no lurid paint and no stripped out interior on this show car. Instead we’ve got rich silver-grey paint, mixed with deep red leather. This car is, in my eyes, the best-looking McLaren of the lot. Now, I said it was a practical hatchback, and I wasn’t lying. In total, the 570GT has 370 litres of luggage space. Sure, it’s split between two different enclosures, but that’s still more space than a Ford Focus.

The 570GT is a remarkable piece of engineering and surely serves as proof that we’re living in a new age. No wonder McLaren has just churned out its 10,000th car! 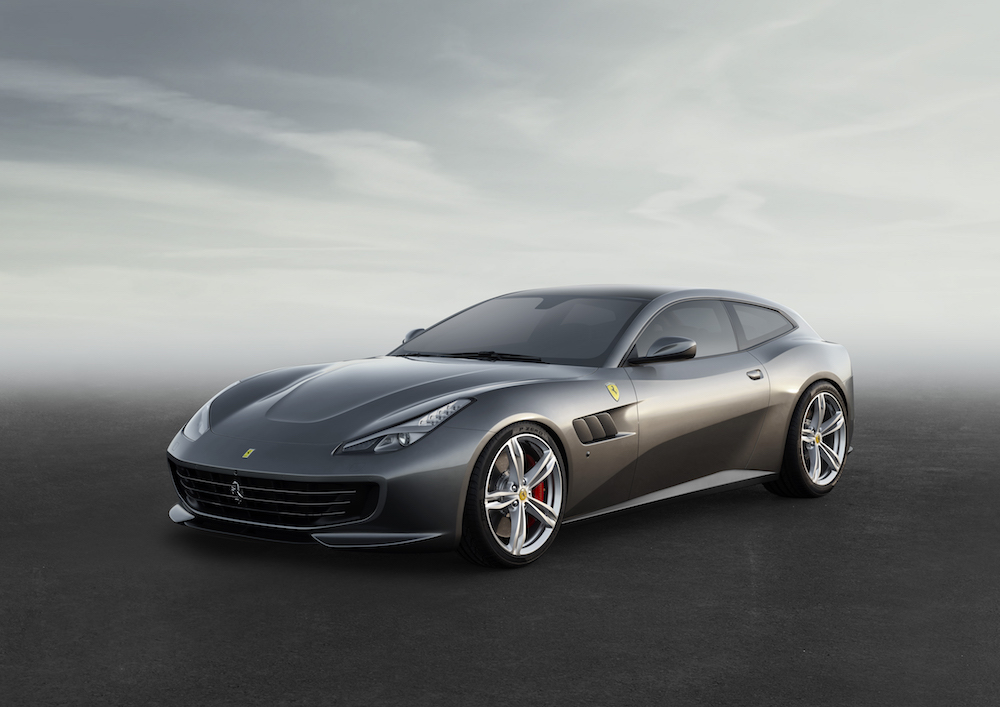 There’s no doubt that the GTC4Lusso is an impressive car on paper. Where it impresses further, however, is in the looks department. Ferrari designed the GTC4Lusso to be an everyday supercar. What they created was a work of art. The GTC4Lusso is not only fast, it’s also brilliantly beautiful, magnificently sounding, and most of all, usable.

Ferrari’s are special cars, and with the GTC4Lusso, you’ll be able to capture that essence every day. Just as long as you’ve got very deep pockets. Totally deserving of fourth place, and the most powerful hatchback of 2016!

When looking at the AMG GT R you’d be forgiven for thinking that it’s a lower, lighter, tauter, track day special. A machine dedicated for track times and nothing else. With that view, you’d only be half wrong.

The GT R is the track version of the AMG GT, already a sportscar-cum-supercar famed for its ability. Undoubtedly, the GT-R boasts sizeable performance gains over the standard car, both on and off the track. But it’s also different from almost every other track day special on the market. Look in the interior and you’ll find no roll cage, like you get on the M4 GTS, unless you ask for it. Look to the door cards and you’ll find proper door handles and speakers, unlike the 911 GT3 RS. Finally, look to the centre console, and you’ll find Sat Nav, air conditioning and a radio.

You see the AMG GT R is a track machine that you can actually use as a car. It’s the kind of thing you could abuse on a racetrack then, once you’re done, drive home in again. Even in the rain, on the motorway, with the air-con temperature set just so. All the while looking infinitely cool in the process.

Unlike the other cars on this list, this Aston Vanquish S is a bit more traditional. Using a naturally aspirated engine, in the world of turbocharging, looks a little old hat. Compared to the car in the number two spot on this list, 595bhp can’t help but look slightly meagre. It’s not a car that’s re-written the rulebooks, nor has it broken any records.

What it is though, is magnificent. The Vanquish S isn’t a car designed by numbers, specifications, spreadsheets or board meetings. It’s a work of art designed by artists with true passion. An Aston Martin is something for everyone to enjoy. It doesn’t matter if you’re young or old, rich or poor – everyone loves an Aston. The Vanquish S – well that’s the pick of the bunch – and a proper old school Aston.

That’s right, we actually are living in an age where we have to limit a car to 261mph. You know, because any more than that would be downright stupid, wouldn’t it? At that speed, it would take just under four days for you to do a lap of the entire globe.

If that didn’t shock you, then this will. If there was a straight road there, and you didn’t need to worry about stopping to refuel, you could drive a Chiron at full chat to the moon and back in less than 3 months. Remember, this is the ‘limited’ top speed.

Any other unworldly figures from this blue beast? Well, yes actually. It makes near as makes no difference 1500bhp, from its quad-turbo 8.0-litre W16 engine. Prices, start at €2.4 million, or around about £2 million pounds at today’s exchange rate. Mind. Blown.

To beat the colossal Chiron, the 911R has to be something special. It really rather is. In fact, the word special sums up this car rather nicely. Here in 2016, we go on about driver’s cars. We moan about the addition of turbos and the omission of manual gearboxes. But honestly, that’s all garbage. Every car on this list is a genuine driver’s car. Ok, the Chiron is a bit different. That’s more of a machine than an implement for driving nirvana.

But the fact remains that every candidate on this list will entertain a keen driver for hours, providing they’re on the right roads. However, with the 911R, you get something more than that. It’s more than a driver’s car. It’s an enthusiast’s car. No, scratch that. It’s a perfect car. The 911R is the ultimate embodiment of what we love about cars and driving.

Sure a GT3RS will annihilate it around a track, and a Turbo S is far quicker in a straight line. However, it’s the 911R that everyone’s raving about. Why? Because a high-revving naturally aspirated engine, coupled with a manual gearbox and rear-wheel drive, is hard to top. The fact a 911R is listed for sale at $1 million confirms just how big a deal it is This is probably the purest, most visceral, most captivating car on the market. Better still you can have it in silver without the stripes!

So that’s it, the 2016 top seven. Some choices might be a bit controversial, but all in all a great year for motoring. Merry Christmas, and here’s to 2017!