Now that my hearing has started to recover, the sunburn has begun to fade and the numerous pictures and videos have been uploaded, I can now begin to make sense of the previous four days.

For the uninitiated, the Goodwood Festival of Speed (FoS) is an annual event which first began back in 1993. The idea is simple; legendary and iconic cars and bikes from the world of motorsport are invited to be hammered up the Earl of March’s drive, at his house in West Sussex, by the greatest riders and drivers from history. In addition, between runs up the hill the cars/bikes are displayed in simple awning-style paddocks with spectators able to get right up alongside them. The additional Moving Motor Show event has in recent years fundamentally replaced the traditional British motor show, with stands from leading manufacturers and new cars being unveiled. Have a look at this if you still happen to be in any doubt as to what the long weekend entails.

The event felt bigger than ever this year, with a sprawling exhibitor’s area, numerous special paddocks, off-road displays and the more recent rally-stage taking up huge acres of the Goodwood estate. Trying to fit all this into even four days is a challenge, given the vast array of distractions both on and off the track. As a result, and for this week’s first FoS themed post, I’ve picked out my top five moments from the weekend.

Every year Goodwood chooses to celebrate a certain manufacturer, with a giant and extravagant display outside the main house and a range of vehicles intended to showcase the marque’s successes. For 2012 the FoS picked Lotus as the company to be revered. As many will know, the brand has taken a battering lately with the optimistic strategy of Dany Bahar, and his subsequent removal. However, the FoS allowed fans to remember the Norfolk firm’s finer moments, including it’s Formula 1 back catalogue. Of particular interest was this one:

Driven by Ayrton Senna and Johnny Dumfries during the 1986 Formula 1 season, the 98T took Team Lotus to 3rd in the constructor’s championship and gave Senna 2 wins and 6 additional podiums. The Renault EF15bis engine gave up to 1,300 turbocharged-bhp, produced from only a 1.5 litre V6. Anything with the name “Senna” on the side always makes the hair on the back of my neck stand up, so to be only a couple of feet away from an iconic car was a special moment.

What, amongst all the exotica on display a Mazda MX-5 makes it this high up the ranking? Yes, because this is no ordinary MX-5; the standard (normally aspirated) 2.0 litre engine has been taken to 205 bhp, carbon fibre bits added, weight reduced and suspension tightened. Amongst the countless supercars, the little MX-5 managed to sound ridiculously raucous.

This was probably in part due to the enthusiastic driving style of those responsible for flinging it up the hill. 19-year-old kart/sports car racer Jade Paveley was the most fired-up of all, and she really made the GT fly. The fact it is bright orange also swung ESM towards liking the dinky convertible, and seriously made one want to be on its drive. Mazda certainly needs to build it.

Given that the regular Nissan GT-R sounded relatively tame whilst speeding past, ESM assumed the race car would not be that much louder. Wrong, oh so very wrong indeed. This thing made the earth shake like an original Dodge Viper GTS-R. Piloted by last year’s FIA GT1 world champion Michael Krumm, the GT-R set some of the quickest times across the weekend. Too quick, in fact, for ESM to manage any video of the damn thing! You’ll just have to imagine instead. 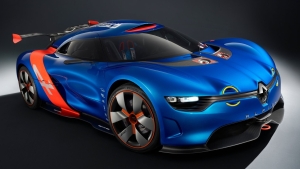 Built by Renault to celebrate 50 years since the launch of the original Alpine A110, this concept car is based on a Megane Trophy racer tubular chassis, using a mid-mounted 3.5 litre V6 to offer up 400 bhp. Whereas the GTR above sounded scary, the A110-50 just sounded as enchanting as it looked. Another fan favourite, and ripe for at least some sort of production offering surely? 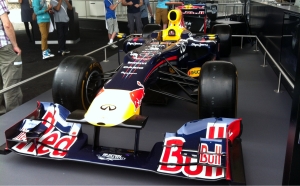 Along with celebrating a specific manufacturer, the FoS also has a theme to the selection of cars on offer. For the 2012 event, the subject was “Young Guns, Born to Win” and to be honest, it’s a title that could have been handwritten for Vettel. The German, who turns 25 this week, already has two F1 world championships and a host of other achievements under his belt. I remember watching him take his first win, and become the youngest driver to do so, in the wet at Monza with Toro Rosso. It was obvious then what a star he was going to be.

Making his first appearance at the FoS, Vettel enjoyed himself as much as he possibly could. Whether it was ripping up the lawn outside the house in his Infiniti FX (Vettel edition), or doing possibly the longest ever display of show-boating in his 2011 F1 car, Seb seemingly had a wail of a time. You get the impression that, whilst many drivers would be there under the forced hand of corporate media pressure, Vettel was there simply for the fun of it. I apologise for the poor video quality, but I think you can get the idea:

The rest of the Red Bull team present made sure they got involved in the fun also:

If those were the highlights, then what were the lowlights?

Well, the Lamborghini Aventador managed to sound muter than a mute swan. The Infiniti emerg-e electric concept failed twice causing the track to be red-flagged. And a Gumpert Apollo had a nasty incident at Molecombe corner cutting short Saturday’s running. But as I’m sure you can gather, these were only small issues compared to the enjoyment shown above.

Check back later in the week for more photos and videos, followed by an editorial post on what Goodwood actually offers to the average petrolhead.