Twitter has a lot to answer for. Along with making people fixate on constantly checking their phones during major television events, it also opens up the doors of self-humiliation on a truly epic scale.

For a prime example of this, see Lewis Hamilton’s outburst from last night: 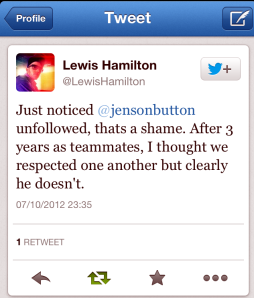 When I first saw this retweeted, I actually though it was some kind of joke. But then he followed it up with this: 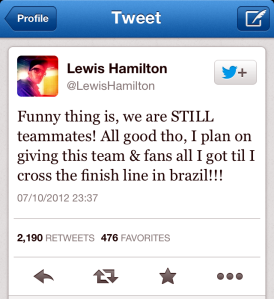 Which quite quickly confirmed he was serious. Let’s just recap things a little bit here. This a multi-millionaire sports personality, who races in the top-level of international motorsport, and is considered (by some at least) to be an iconic role model. Yet he’s tweeting rubbish about his, still current, teammate like he was back in primary school. Lewis is only three months or so younger than me, but with actions like last night’s he sounds about 13 years my junior. The internet has probably softened my palate towards shocking or distasteful content. But these two tweets made me genuinely cringe and feel awkward for having read them. Although, perhaps, not as awkward as Hamilton felt when he had to point this out: 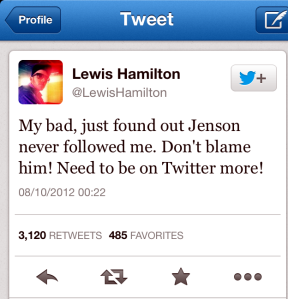 Ouch. That Button has never followed him asks more questions that it answers. But that is very much beside the point; the fact is Hamilton made ridiculous, childish accusations which turned out to be completely untrue in the first place. You have to wonder what his management team, Simon Fuller’s XIX Entertainment, tell him with regards to social media. He has already tweeted Mclaren telemetry data from the Belgian GP whilst whingeing that Button had a better setup than he did.

I’ll admit I’ve never been a fan of Hamilton during his time at Mclaren, and I doubt that’ll change when he moves to Mercedes. At least early in his racing career it was possible to respect what he had achieved, along with his aims; wanting to emulate his hero Ayrton Senna by driving for Mclaren, wanting to be World Champion, wanting to be the best. Back then he was a very focussed driver. Now, Formula 1 seems a pastime to fill gaps in his celebrity lifestyle between hanging out with rappers and his are-they, aren’t-they relationship with Nicole Scherzinger. There just seems to be constant drama in Hamilton’s life, be it on or off-track, with the end result being that he appears to be throwing his talent down the drain which is a massive waste of potential.

By contrast, there is at least one driver out there who chooses to eschew Twitter, Facebook, and pretty much any invasion into his private life. He’s also the one who took pole position, fastest lap and victory in Sunday’s Japanese Grand Prix; namely Sebastian Vettel. When thinking about the Hamilton situation, it made me realise I know virtually nothing about what the double World Champion does in his spare time. And that’s because, if you read this article from last year, you realise it’s for the reason that his private life is just that; private. Before reading that I didn’t even know he had a girlfriend for example, compared with the constant shots of Hamilton or Button’s partners F1 viewers are made to watch.

As noted before, there is some bias in the fact I am a fan of Vettel and what he has accomplished. But I’m also highly impressed by not only the professional way in which he treats Formula 1, but the fact he still genuinely seems more surprised than anyone that he is there doing it for a living. Perhaps that’s the difference; Vettel has not allowed himself to become bigger than the sport he loves, despite the accolades and achievements he has made. Hamilton, on the other hand, seems to act like F1 is just a plaything for him despite all the talk of wanting to win and be a contender.

Lewis and Mercedes may surprise me, but I very much expect Hamilton’s career will go much the same way that David Beckham’s did; chasing the money and the lifestyle but achieving very little of substance. Beckham also happens to be managed by Simon Fuller.

The next five races promise to hopefully showcase a title battle going all the way to the wire. But for Hamilton it’s more than likely a non-starter, despite the mathematical chance of him still being able to be champion. Realistically it’s going to be a straight fight between Vettel and Alonso to see who’ll become the triple title taker first. I can’t wait!