After several posts about car buying predicaments, here’s somebody with another automotive dilemma. Namely my Father, and the choice of not one, but two, Subaru Impreza WRX STis to drive.

The WR Blue Impreza on the right was my Dad’s actual company car for a number of years. The black one appeared after he won a competition, with the prize being the use of an Impreza STi for a few days. This resulted in the quite surreal situation of our house having both banzai boxer-powered saloons on the drive for a while. Tonight’s featured picture came about after we realised that we had to get some photos to document the silliness of running two Imprezas at the same time. So we took the pair to their natural home; the North Yorkshire Moors, early on a Sunday morning back in August 2003. Given my age at the time – my late teens – this was a very cool situation!

In fact, my Dad running an Impreza STi was rather cool in itself. He picked all the options himself; an insanely loud Prodrive exhaust, those huge STi mudflaps (£100 a corner), and a hilariously tacky double-DIN stereo headunit. He did, annoyingly, draw the line at ticking the box for a carbon-fibre strut brace. The piece-de-resistance was perhaps the standard-fit shift-light, which would illuminate and sound a warning at a set RPM, for a true motorsport moment. Having a water tank in the boot for the intercooler spray was another little detail, which still makes me smile to this day.

The sound of the burbling flat-four pulling onto the drive still lives with me. The house would reverberate ever so slightly, idling whilst the turbocharger was allowed to cool down. Longer journeys in the Impreza were less fun however; ear plugs became mandatory for any kind of motorway cruising. Such noise was probably the reason for my Father developing tinnitus!

But it’s easy to forgive such things, when I remember the sheer brutality of its acceleration and handling. realistically, very little could live with the STi on normal roads, such was the width of its abilities. I don’t think I have ever really experienced a car with so ferocious performance that could be used on a daily basis. It may have been ugly, to some, but the Impreza WRX STi Type UK “Prodrive Style” is a car that will remain engrained in my automotive memory for a very long time. 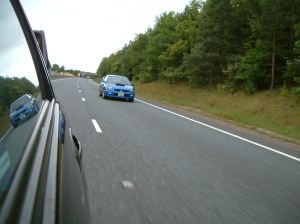