If this current 2013 Formula 1 season is set to be known by one thing, save for some even greater drama later in the year, it’s the impact that the tyres offered by Pirelli have had on the outcome of races. 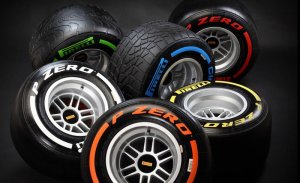 At Silverstone last weekend we witnessed the dramatic and dangerous failure of Pirelli tyres during the race, with Hamilton, Massa, Perez and Vergne all suffering. In addition, teams reported damage and cuts to tyres removed from the cars of other drivers. Clearly something had gone majorly wrong with the rubber supplied at the British Grand Prix? Well, Pirelli maintains the failures were due to circumstances and cite the following factors as reasons for the failures:

The above, and the resulting dramatic failures,  were according to Pirelli a  “completely different phenomenon” than the delamination-led failures seen earlier in the year. So instead of one set of circumstances causing terrifying tyre destruction, we now have two. Great.

Whilst the first three reasons may seem relatively understandable, the fourth of tyres being mounted the “wrong way round” is interesting. Although looking all the same, F1 tyres are in fact asymmetrical. As such, they shouldn’t be swapped side to side, as the tyre is designed to cope with loading forces in a certain way i.e. outside bit should be on the outside. Apparently, the teams have found that be swapping the tyres over, this gives them a performance advantage. More importantly, Pirelli admits that they “did not forbid” such a practice and that the consequences of such were underestimated.

In part I feel sorry for Pirelli. They were asked to develop tyres which produced very specific properties in order to create “racing” through the characteristics in which the tyres degraded. But at the same time, they don’t appear to have fully controlled the situation in which the tyres are being used. Coming forth with the reasons above (perhaps bar the sharp kerbs) suggests that either a) Pirelli were aware of the risks but let the teams carry on, or b) weren’t even aware of the risks. Neither of which show the Italian firm particularly positively. Throughout all this Pirelli maintains that the current 2013 tyres are safe if used “in the correct way.”

In spite of that, for this weekend’s German Grand Prix Pirelli have announced that the teams will use an evolution of the tyres tested in Canada, using a Kevlar internal belt construction rather than a steel one. In addition, teams will also be “forbidden” from swapping tyres against their asymmetric direction.

Following that, in Hungary Pirelli will introduce a whole new range of tyres, marrying 2012 construction methods to 2013 compounds. A three-day test session will also take place at Silverstone on the 17th-19th July. But remember, those 2013 tyres are safe if used as recommended, which would lead me to wonder why go to all the hassle of the above, when Pirelli could ask the FIA force the teams to use the current ones “correctly” instead?

Call me cynical, but there’s something about Pirelli and Paul Hembery’s attitude which makes me question what they say. Perhaps most ironically of all is the fact that all the above is now being used to argue for more in-season testing. Just like Mercedes AMG and Pirelli got a telling off for after than “private” test at Catalunya.

Whatever happens, it is fair to say we have so far been lucky it not witnessing a driver seriously hurt by Pirelli tyre failures this year. Hopefully we won’t have to see that either, if the above changes work.