In part 1 of a 4 part special, ESM’s Uncle Steve returns. Since he knows you’d be disappointed if none of the four contained a rant or complaint, he’s getting in there straight away with an article on possibly the least reliable car ever produced by SEAT, a Leon FR TDI owned initially by Steve’s fiancé and, more recently, by Steve himself. At some point Steve also intends to stop writing in the third person! 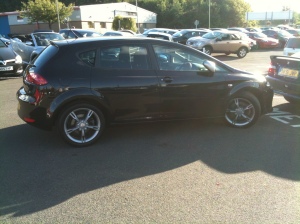 In the summer of 2010 my fiancé decided that she needed a hot hatch to rival my own (see my article on the MkV Golf GTI I owned), she’d always loved the SEAT Leon Mk2 and we decided that the frugal diesel was the model to go for to give us a nice blend of practicality and fun between our two vehicles.

We went shopping in local SEAT dealerships but they appeared to be having a dry spell and there were very few FR TDIs on their forecourts. However a non-SEAT dealership did have a car in stock that was relatively low mileage and in good condition. This dealership will remain nameless for legal reasons.

Having negotiated a deal which included a cam-belt change we were delighted and returned approximately 1 week later to collect the car. We were immediately worried with the symptoms the car started to show, none of which had been present on the test drive. It took 1 year and numerous visits to the supplying dealership and our local SEAT dealership before it was eventually diagnosed as running out of time. Although having it put back in time resolved many of the issues the car was still not running smoothly, making a horrific smell at a stationary idle and occasionally chugging heavily, again at a stationary idle.

It has to be said that this is not actually the low point of ownership, the low point of ownership being the faulty diesel injectors that VAG have fitted to many vehicles but resisted recalling for a long time. If just one of these injectors fails, the whole engine shuts down and you quickly lose ABS, servo-assisted brakes and the power steering. Such a fate befell me as I crested an incredibly steep hill – going down it at the full 60mph as allowed by the law. Luckily there was nothing in front or behind me and a lay-by was close to the bottom of the hill so as to allow for a relatively controlled stop. However, not having servo-assistance on the brakes meant that I had to use quite a lot of effort to stand on the brake pedal and the ABS had also stopped working so cadence braking was required. Lucky this happened when I was driving rather than my fiancé as I think it unlikely she would have had the strength in her legs to stop the car or the driving experience to know that cadence braking was required – a fact she readily admits before I am painted as a chauvinist!

When inspecting the various consumables on the car, the brake discs, exhaust etc. it was clear to see where the economies had been made by VAG and how they were able to sell the Leon for substantially less than the equivalent Golf or A3. Whereas on my Golf GTI (which was 1 year older and had 20 000 more miles on the clock than the Leon) the exhaust was still in mint condition, on the Leon the exhaust was well along its way of shedding its outer skin, in addition, on the Golf the brake discs were still in good condition yet on the Leon they were wearing badly. Clearly the Leon is priced far lower than the Golf but whilst some economies are obvious and are commented on upon by car magazines and reviews, the hard plastic dash, lower quality switchgear etc. No one seems to comment upon the under-the-skin economies that raise the total cost of ownership significantly if one keeps the vehicle beyond 3 years old.

In addition, the Leon also managed to completely ruin its gearbox, to the point that the outer casing was shredded and required replacing. Due to SEAT not keeping this casing in stock and it being manufactured in Spain, to order, this resulted in the car being off the road for 2.5 months and SEAT UK having to provide a hire car, eventually. This work was carried out at a local SEAT dealership who I am less than happy with, who lied to me, who failed to order the correct parts and who failed to keep in touch.

Yet again VAG customer service falls short, this has played a big part in my move away from the VAG brands despite being a massive VAG enthusiast, a shame but I’m voting with my wallet – it’s the only language companies speak.

Given how the car never ran acceptably, even after being timed correctly, the decision was made to get rid of it as soon as possible. I recently replaced the Leon with a MINI Cooper SD to complement my fiancé’s Countryman Cooper D ALL4 and you can expect to read all about these in parts 2 and 3 of my 4 part special.