So only a few days after we mentioned a VW Golf R, Peugeot decided to show off their new creation which also wears an R badge. If we don’t have a SEAT Leon Cupra R or Kia Rio R by the end of the month ESM will be very disappointed. 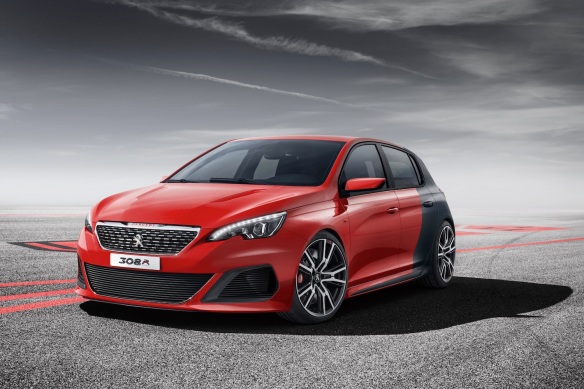 Regardless as to what everyone is calling their hot hatchbacks, here are the details on the 308 R Concept. The Concept tag is important because, for now, Peugeot isn’t making any real commitment to offering the 308 R to the masses. Instead it attempts to remind everyone that the facelifted 308 exists and that Peugeot does know how to make C-segment hot hatches, honest.

Without wanting to sound too unkind, the 308 R Concept is a little bit of a parts-bin special, sharing most of the running gear with the recently announced RCZ R coupe. This means a 270 bhp 1.6 litre turbocharged engine mated to a six-speed manual gearbox. The 19″ matt black/diamond cut alloy wheels and 380mm front/330mm rear brake discs also arrive courtesy of the RCZ (pictured below).

Externally the 308 R uses carbon fibre extensively, with the doors, front wings, side sills, bonnet and bumper all being made from the lightweight material. Carbon fibre also makes an appearance in the wing mirrors, as mesh covering the side air intakes in the front bumper. Racey? Yes. A little bit aftermarket looking? Sadly, also yes, to the eyes of EngageSportMode. You also wonder just which episode of Pimp My Ride inspired the 308 R’s red and black two-tone paintwork that seems to have no obvious explanation.

It would seem unlikely that Peugeot would launch a full production version of the 308 R Concept. Doing so would challenge the RCZ R too greatly, currently positioned as the flagship model in the Peugeot performance range. Instead it is more probable we’ll see elements of the 308 R influence a new GTi model. The current GTi (only badged GT in the UK) has hardly failed to win much recognition from the press, so an improved version could be just what Peugeot’s rival for the Golf needs.

Many will recall the brilliance of the Peugeot 306 GTi-6 and Rallye models which, for many years, proved to be the standout performers when it came to handling and performance. Hopefully Peugeot can find a way to engineer some of their soul into the new 308; something it appears to be on the right lines with in the shape of the 208 GTi.

Finally, as with virtually everything in the motoring news at the moment, expect to see more of the 308 R Concept at the forthcoming Frankfurt Motor Show.