Hitting 40 is kind of big deal, so Volkswagen has decided to celebrate four decades of the Golf GTI in their usual style. Adding a little more power, some bigger wheels, and interior trinkets to create the 2016 GTI Clubsport. 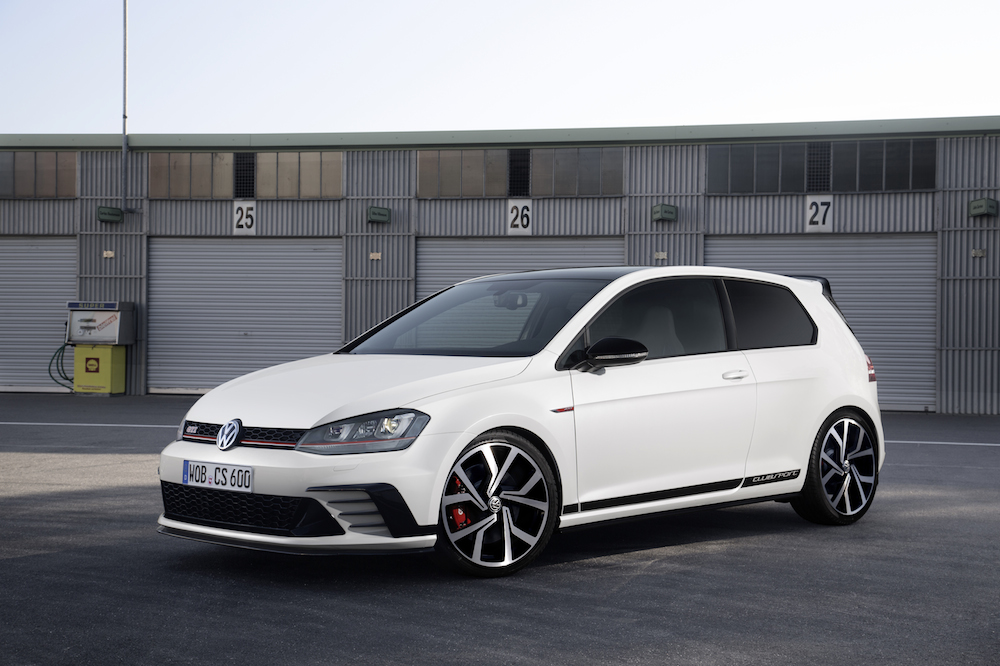 VW showed off the Golf GTI Clubsport as a concept at the Wörthersee show earlier in the year, and the car has made it through to production format virtually unchanged. It’s hardly revolutionary, following a similar pattern to that introduced by the Mk4 25th Anniversary, but does make for a rather powerful GTI.

Power is upped to 261bhp (265PS) from the 2.0-litre turbocharged four-cylinder engine. It’s an output familiar to anyone who bought a SEAT Leon Cupra 265 SC, but makes this the most powerful production GTI to emerge from the Wolfsburg factory. There’s also the ‘over boost’ function which allows the Clubsport to produce 286bhp (290PS) but only for ten seconds at a time. Surely a quick remap will result in having all the power, all of the time.

You don’t have to have Oryx White

These are the optional 19″ Brescia wheels

Acceleration is improved over the regular GTI, with 0-62mph in 5.9 seconds for the DSG car, with the six-speed manual just behind at 6.0 dead. The DSG loses out by 0.3mph to the 155mph top speed of the manual car, but nobody is going to really mind. Well, except on internet forums, perhaps. Naturally as it’s not a Golf R power only goes to the front wheels.

Externally Volkswagen claims there’s an entirely new bodykit with redesigned front bumper, rear diffuser and side skirts though it is hardly a dramatic change. The strakes on the front end now sit proud of the bumper, and get a gloss black finish. In fact VW has gone slightly mad with gloss back, using it on the wing mirrors, and bigger rear spoiler also. At Wörthersee claimed the spoiler would create actual downforce, but now only notes that it has been honed in the wind tunnel. You’ll also notice the distinctive side stripes, meant to emulate the original Mk1 Golf GTI, unique alloy wheels designs (18″ and 19″ sizes are offered), and probably not notice the larger exhaust tailpipes and darkened LED rear lights. 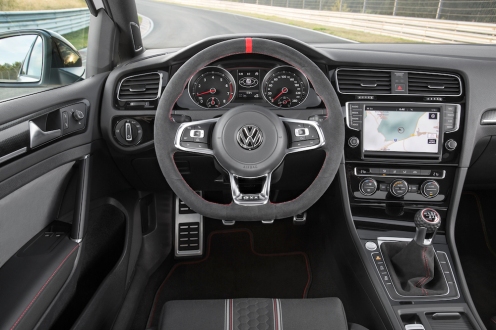 If we sound a little underwhelmed, it’s only because ESM feels there was probably scope for just a little more drama in the exterior of the GTI Clubsport. Fortunately, Volkswagen has made a decent effort inside, with bucket seats partly finished in Alcantara with a unique honeycomb design. There’s also an Alcantara steering wheel, with red-stitched 12 o’clock marking that ESM thinks would look great in a Polo GTI. Alcantara also makes an appearance on the gear level gaiter, with the gear knob itself being the classic golf ball design.

No details on pricing as of yet, but given that the standard Golf GTI retails at £27,500 in the UK, we’d be placing bets on a list price nigh on £30,000. It’s probably a sound investment, with the values of Anniversary edition cars traditionally being stronger than the regular car. It’ll also be quite exclusive amongst a sea of Golf Rs on lease deals, even if it’s not quite as quick.