Turbos are all the rage these days, so what effect does adding one to the Hyundai i30 have? 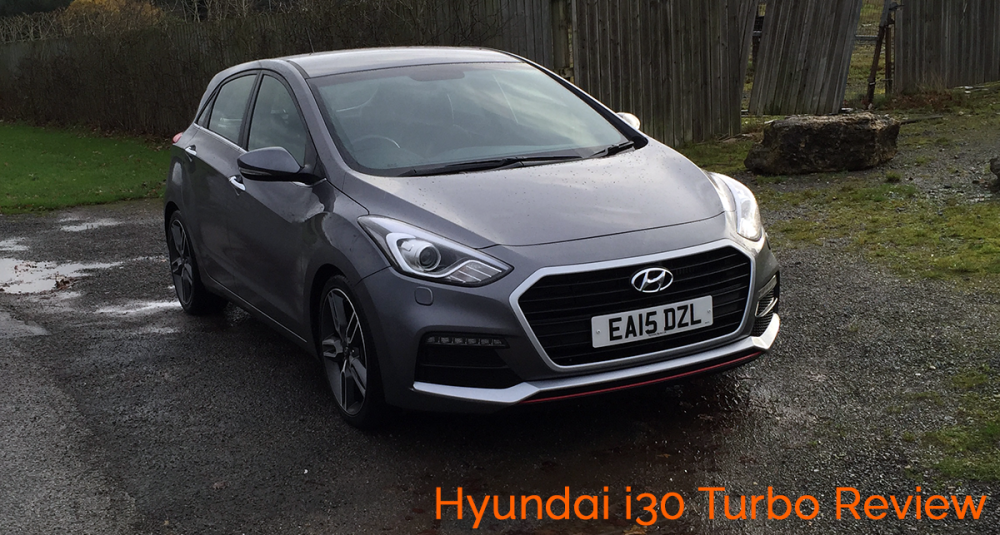 Before the rush to downsize and increase efficiency, adding the word ‘turbo’ to the back of a car symbolised that it was the fastest model in the brochure. Although even the regular Porsche 911 Carrera features forced aspiration now, until very recently the 911 Turbo was always the top of the pile. Luckily for us, Hyundai is sticking to the old rules, with the i30 Turbo representing the quickest, most powerful, and most expensive model in the range. That puts it right on the EngageSportMode radar, so we spent seven days with the i30 Turbo to see if it lives up to all the expectations created by that special badge.

All up in your grille

Looks wise the i30 Turbo manages to strike the right balance between sporting and subtle. The bodykit is bespoke to the Turbo, featuring red trim in the front and rear bumpers, because red bits means hot hatch. Just ask any Volkswagen GTI owner. At the back there’s a deep rear spoiler, and a diffuser that features an exhaust tailpipe mounted at each side. Throw 18″ alloy wheels into the mix and it creates the overall effect of an attractive car with neat detailing. Based on looks we’d personally go for the three-door version – an option that is exclusive to the Turbo model – rather than the regular five-door tested here. 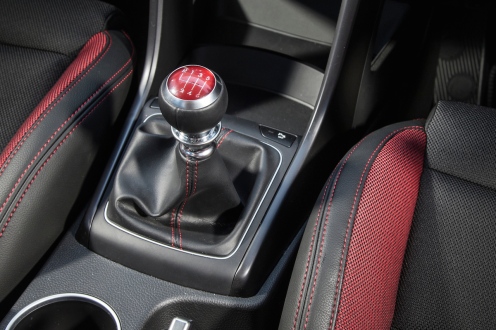 Powering the i30 Turbo is a 1.6-litre T-GDI petrol engine, featuring a variable-geometry turbocharger, that boosts output to 183 bhp. The engine is shared with the Kia Cee’d GT, but when installed in the Hyundai finds itself to be 18 bhp down on its Korean cousin. Both share the same 195 lb-ft of torque figure but, at times, you might find yourself wanting for a little more twist. In another old-school nod, the drivetrain features a six-speed manual gearbox; there’s no flappy paddle stuff going on here. It’s a gearbox with a chunky positive action, and one that you’ll get used to working in order to keep the engine at peak revs.

So does that turbo engine deliver the expected forced induction thrills? Well, kind of, but not in the manner you might expect. If you’ve just jumped from a VW Group-engined car with a vast plateau of torque available straight from the off, the i30 Turbo’s need to be worked might appear a little foreign. In fact it thrives on revs more than you would expect, needing to be fully stretched to the redline to get the most from it. Luckily the engine is smooth and happy to spin up, whilst also being largely muted inside the cabin. There’s a slight burble at idle, but don’t expect too much from those twin exhaust tailpipes under acceleration.

Officially, 0-62 mph takes 8 seconds dead, with a top speed of 137 mph, making the i30 Turbo more bhuna than vindaloo in hot hatch terms. For comparison, a SEAT Leon FR 1.8 TSI does the same sprint in 7.4 seconds, whilst that pesky Kia Cee’d GT will do it 7.3 seconds. So, it’s not staggeringly fast, and the overall level of refinement masks the feeling of performance to an extent. But, for day-to-day commuting, such sophistication is hardly a crime.

Perhaps not helped by cold weather outside, and a driver making use of everything possibly heated inside, the i30 Turbo averaged around 29 mpg during our week with it. Official combined fuel consumption is rated at 38.7 mpg, and the i30 Turbo could probably achieve closer to this in better circumstances, but it’s hardly a figure to write home about. Strangely for a modern car, the 1.6-litre engine lacks an automatic stop/start, pushing C02 emissions up to 169 g/km. That means a first-year road tax of £295, followed by £205 for each year thereafter.

But before ESM descends into spreadsheets and calculators, let’s return to how the i30 Turbo drives. Most importantly there’s a sport mode, although it only affects the steering and nothing more. Whilst the four-spoke steering wheel won’t be giving you bundles of feedback, it’s enough to be precise with when pushing on. That sport mode does add extra weight to the steering, making things feel more natural at least. Outright grip from the Hankook tyres is strong, meaning the stability management and traction control systems remained untroubled even on greasy wintery roads.

Untroubled is also the best way to describe the ride quality which was genuinely remarkable for a car fitted with 18″ wheels and low profile tyres. Aside from the biggest ruts and bumps, the i30 Turbo managed to smooth out the worst of the North East’s roads. Yet, whilst keeping things comfortable, it also managed to limit body roll to a noticeably low amount. The ride is undoubtedly a credit to the i30 Turbo, and just adds to the feeling of everyday usability. Although the i30 Turbo endured many miles being tested on the Nordschleife-Nürburgring, the engineers seemingly managed to remember that this was a road car, not a track day monster.

Seats are supportive, and feature electric adjustment for driver.

Sharing an interior with the mass-market i30 means the Turbo is blessed with all the usual practical touches you’d expect from a family hatchback. There are loads of storage bins and cubbies, more than acceptable rear seat space, and a boot that’ll absorb all the stuff you might want to buy at Ikea – within reason. So when you add chunky sports seats with neat red stitching, a perforated leather heated steering wheel, black headlining, and aluminium pedals into the equation, it becomes quite an attractive cabin.

In fact the overall specification of the Turbo matches its place at the top of the i30 pile, and there’s actually no extra options you can choose. With dual zone climate control, heated seats, keyless entry and ignition, Bluetooth connectivity, cruise control, touchscreen sat nav, and a reversing camera we’re not sure what else you could realistically add anyway. We could go on but, in all seriousness, it’s a genuinely impressive haul of standard equipment that makes the i30 Turbo an attractive proposition at a £22,600 OTR price for the three-door model. Opting for five-doors requires an additional £500, and metallic paint will add a further £565. But that still leaves a C-segment hatchback absolutely loaded with kit for a decent price. Check out the competition and you’ll see it’s a pretty good deal.

If you think of the i30 Turbo not as a full-fat GTI, but as a warm hatch Grand Tourer, it becomes a more attractive proposition. It’s well-built, refined, stuffed with equipment that would be expensive options on other cars, and just quick enough to remain interesting. Throw in Hyundai’s five-year / unlimited mileage warranty and it can make a strong argument for itself. Whether you can avoid being swayed by the ever present spectre of the Kia Cee’d GT is another question, however. The i30 Turbo is never destined to be a big seller, but for now it gives the range an effective halo model until the hotter stuff arrives.

As a starting point for future performance products, the i30 Turbo is a solid base to build on. Given that firepower is the one element of the car that would benefit from being uprated, the expected 250 bhp+ of the full N Performance i30 should solve the issue and turn it into a substantially great car. We’re a fan of the i30 Turbo at ESM, for it being an interesting enough alternative to regular warm hatches, and for being packed full of equipment. Oh, and for making us genuinely excited about the prospect of a properly quick i30…