The Hungarian Grand Prix is often regarded as being a processional affair, with limited overtaking opportunities. This weekend’s event is therefore unlikely to liven up a Formula 1 era that is the most one-sided in a generation. ESM’s editor has donned his anorak and crunched the numbers from 1998 to present.

Cast your mind back to the year 2000 and you might recall the Millennium Dome, fears of the ‘Millennium Bug’ or even just the Willenium. Yeah, the latter really did happen. If you’re a Formula 1 fan you might remember it as the year Ferrari and Michael Schumacher started out on a five-year long display of hegemony over the World Championship.

But, after watching Lewis Hamilton take another victory at the British Grand Prix, it got us wondering as to whether the current Mercedes AMG streak out ranks even the 2000-2004 Ferrari era for dominance. Surprisingly it does, and by a fairly significant margin!

Let’s break it down to the most basic numbers in terms of wins during those title-claiming periods. For Ferrari this is from the 2000 Australian Grand Prix, to the 2004 Brazilian Grand Prix. That covers some 85 races in total, of which Ferrari won 57 of them. In percentage terms that’s 67%, so just over two-thirds were won by the Scuderia in that seemingly endless period of Ferrari success. 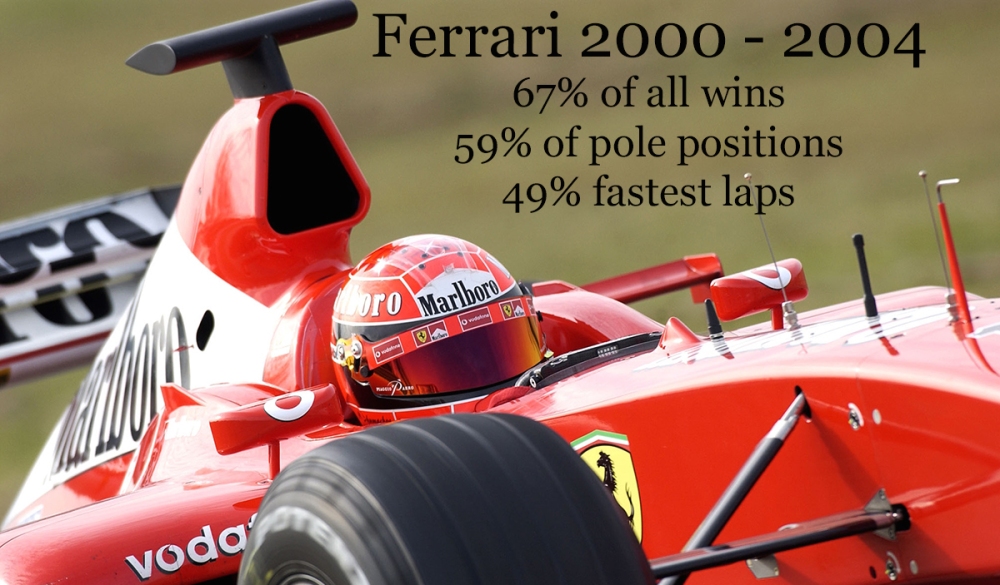 Since the 2014 Australian Grand Prix, which saw the introduction of the new engine regulations, there has been 48 races. That’s counting the 2016 British Grand Prix – won by Lewis Hamilton, of course. In that period Mercedes AMG have taken 41 victories! Yes, seriously, in two and a half years, only seven races have been won by non-Mercedes drivers. That gives Mercedes AMG a win percentage of a staggering 85%!

Even more considerable is that they’ve claimed 94% of pole positions (45/48) in that time frame. For comparison, Ferrari only managed 59% of poles during their era of dominance. Taking over two-thirds of all fastest laps since the beginning of 2014, must also make Mercedes feel pretty smug about just how far ahead of the game they are.

Even in comparison to Red Bull, who many claimed to have made F1 dull during the period of Vettel domination, Mercedes-AMG still stands far ahead. With four back-to-back titles, Red Bull took wins in just over half (53%) of the 77 races entered. Pole positions percentages are also lower (66%) compared to Mercedes, with fastest laps at less than half  (45%) in total. Those who bemoaned the seemingly constant chain of Red Bull wins might be a little surprised, although Vettel’s nine-race winning streak at the end of 2013 is perhaps what people remember.

With Ross Brawn back in the spotlight again, it’s also worth looking at how the car wearing his own name performed in 2009. For a season that is remembered as one where Brawn GP took F1 by storm, things look decidedly less one-sided when you realise the team won less than half (47%) of the 17 races. Proof that consistency in scoring points is often enough to win, evidenced by Jenson Button claiming only 6 victories all season. Yet that 35% personal win rate was enough for him to take the title.

However, the lowest win rate of the modern era belongs to Renault during their two-year title spree in 2005 and 2006. Eventual double drivers’ champion Fernando Alonso, partnered with F1 journeyman Giancarlo Fisichella, only notched up 16 wins across the two seasons for a rate of 43%. Perhaps more telling is the fact Alonso took 14 of those 16 wins himself – some 88% of Renault’s victories thus attributable to him personally. In comparison, Lewis Hamilton only accounts for 61% of the Mercedes wins in the current period, demonstrating the recent successes of Nico Rosberg.

Casting our minds back even further, to the last time a silver-coloured car reigned supreme for more than one year, and we find Mika Häkkinen and his McLaren-Mercedes. With McLarens taking exactly half of all wins during the 1998 and 1999 seasons, this reflects the battles between Michael Schumacher and Häkkinen during the two years. Things may have been different had Schumacher not broken his leg during 1999, forcing him to miss several races.

So, what can we surmise? That those who complained about Sebastian Vettel’s four-year winning spree are probably Lewis Hamilton fans? That might explain the greater accusations of boredom during the 2010-2013 period, compared to now. In addition, whilst we might fondly remember Michael Schumacher and Ferrari on their never-ending train of wins, it actually pales in comparison to the Mercedes AMG steamroller.

We can also see that pole positions are probably the greatest indicator of dominance, given that races include far more variables, with qualifying the best representation of outright performance. It means you can most probably bet a substantial chunk of money on a Mercedes AMG pole position at the Hungaroring on Saturday, too.

Whilst we might jest, the above demonstrates the challenge faced by Formula 1 right now. The sport has always seen periods where one team will be exceptionally strong, but many will have no recollection of a time where things appeared so weighted towards one constructor than now. Mercedes clearly nailed the new engine regulations and are reaping the rewards deservedly. Blame can be apportioned to the hands of Ferrari and Renault, who failed to produce an engine as powerful and consistent as the Mercedes hybrid unit.

The question for F1’s governance is therefore a tough one – does it want to allow one constructor to win weekend after weekend unchecked, due to the best mastering of the rules? Or does it want to make a better spectacle for those watching where any number of teams or drivers could win. There’s no quick fix without the risk of alienating one set of fans, or causing uproar amongst manufacturers. DRS and Pirelli tyres have been intended to make racing closer, yet these merely treat the visible symptoms of the lack of competition in F1 – not the root cause.  Realistically, unless television viewers and advertising revenues drop dramatically, don’t expect a wholesale revamp of how Formula 1 promotes on-track action anytime soon.


*The eagle-eyed will note we haven’t included the 2007 and 2008 seasons. This was done deliberately, due to the fact there was no clear leader during those two years. Brawn’s 2009 season is included due to frequent media reference to the success of the car, and team, during that year. Data is taken as accurate following the 2016 British Grand Prix