Remember the ZEOD RC, and the DeltaWing before it? Nissan’s fascination with narrow-track and electric power continues, but now in the form of something that could actually appear on the street. Oh, and with a drift mode.

According to Nissan, this is the future of electric cars that enthusiasts shouldn’t be scared of. That a car can be fun, despite not burning fossil fuels inside, but relying on the gentle hum of batteries instead. Whilst the name sounds like something Gillette would sell, the BladeGlider is a very serious attempt at showcasing what the near-future might hold. This is the Leaf with excitement added: the drama of dihedral doors, an open roof, and technology from Williams Advanced Engineering beneath the radical styling. The narrow front-end and wider rear is lifted straight from the DeltaWing design, maximising aerodynamic efficiency. Cameras replace the wing mirrors for the same reason.

Previously displayed as “just a concept” in 2013, Nissan is using the 2016 Olympics to showcase the real-word potential of the BladeGlider. If you happen to be in Rio de Janeiro, and be a fancy VIP, you may well find yourself being shuttled around by the BladeGlider. That’s chauffeured around at considerable pace, too. With the equivalent of 268hp available, and a thumping 521 lb-ft of torque, the BladeGlider can hit 0-62mph in less than 5 seconds and go all the way to 115mph. Whilst that isn’t quite Tesla Model S Insane Mode fast, it’s certainly punchier than your average Leaf. 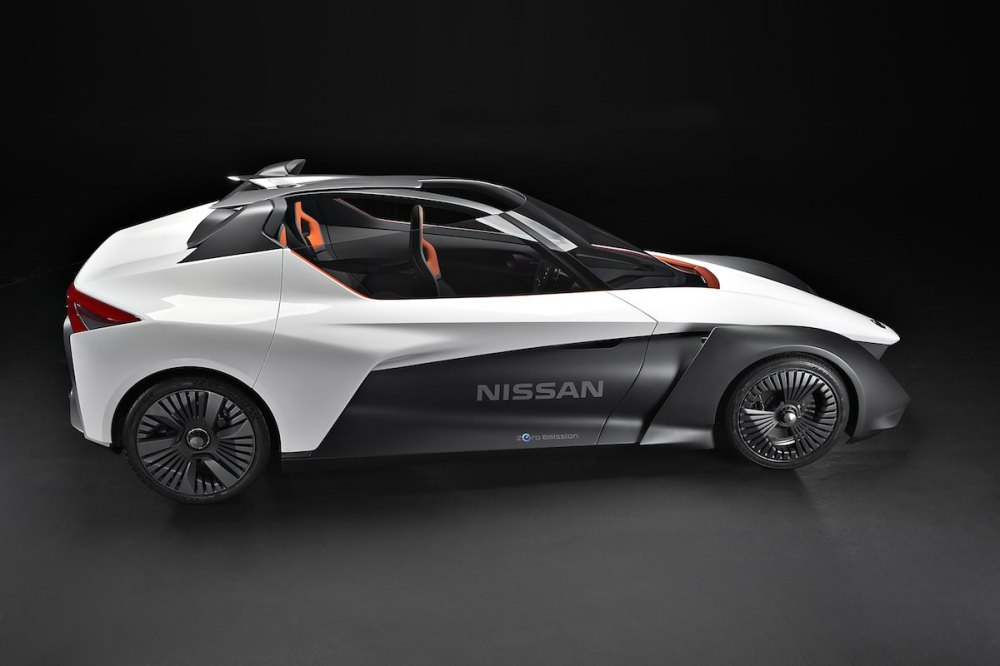 With each rear wheel using an individual electric motor, the BladeGlider’s real party trick is the ability to torque vector. Just like a Nissan GT-R, or a certain Ford Focus RS. Should the car detect understeer, it’ll send torque to the outside rear wheel to turn the car back onto line. But it also allows for added fun with the drift mode option – perhaps there is some extra karma from doing lairy drifts in an electric vehicle…

Inside the BladeGlider is also futuristic, and appears to have more in common with something from Star Wars. If it wasn’t for the steering wheel you could probably believe it to be the cockpit of a fighter jet from the year 2075. The three-seater arrangement, with the driver up front alone, also furthers the idea that this is the future, whilst four-point harnesses emphasise the sporting nature of the BladeGlider. The driver gets access to twin screens in the dashboard for the rear view, along with a host of other dials and buttons. We’re intrigued as to what the big red “push/pull” one does. Fire lasers, perhaps? We’re also liking the Stealth Orange seat trim, even if that name is something of an oxymoron, surely? 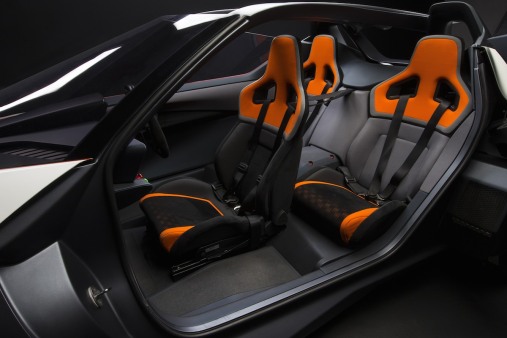 You need to pick two friends to bring along.

Is Nissan brave enough to put the BladeGlider into production? Or is this just a way of showcasing technology at the biggest sporting event in the world? We’re leaning towards the latter, but we would be rather excited if it was the former. Unless we somehow discover a way to synthesise fossil fuels from nothing, and remove the by-products from burning them, electric cars are very much are going to be the future. As such, we might as well get excited about it. Plus, this is substantially cooler than a Leaf, or a Qashqai, so we would happily put an ESM stamp of approval on the BladeGlider.