Last weekend EngageSportMode made its first trip all the way from the North East to Thruxton in the South. After several hundred miles of driving, lots of energy drinks and the requisite sunburn quota, was it all worth it? 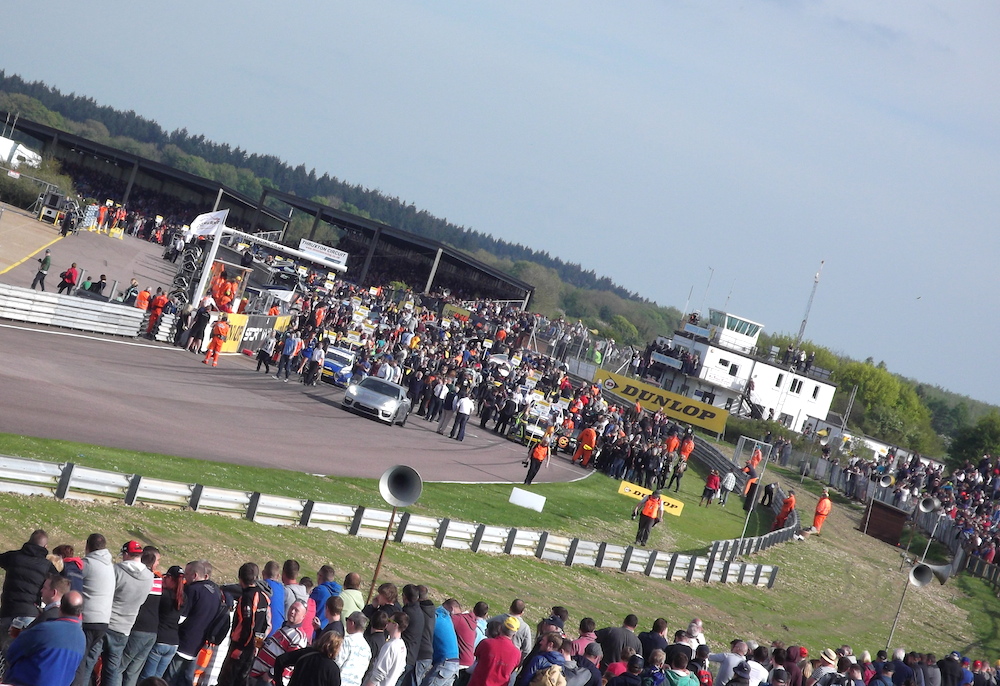 302 miles is the distance from EngageSportMode.com headquarters to Thruxton race circuit in Hampshire. Local to us it certainly is not. As such, this was the UK’s fastest circuit’s one opportunity to impress. Between ESM’s BTCC Correspondent and myself we’ve visited Knockhill, Donington Park, Oulton Park, Rockingham, Goodwood and, of course, Croft. Visiting a new circuit is always exciting, so expectations were high. 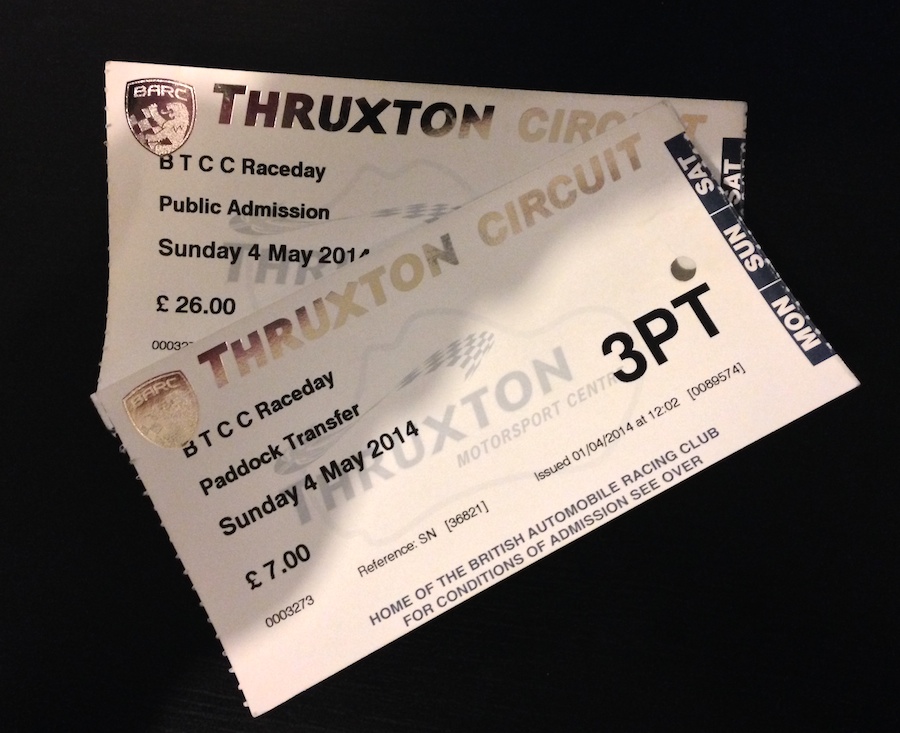 However, Thruxton kicked us in the proverbials from the off with an hour-long wait in traffic to get into the circuit. ESM has been to enough race meetings to know that some queuing is inevitable, with tracks always sited in the middle of nowhere with poor access. But as soon as it became nose-to-tail on the A303 we knew it was going to be a long wait to get into the track. Perhaps more noticeable by its absence was the relative lack of traffic management. Bar one set of traffic lights on a side road, it was otherwise a case of fight it out amongst yourselves. Not a great first impression. Car parking itself was also somewhat amusing, with the need for five people to guide each car into each space. 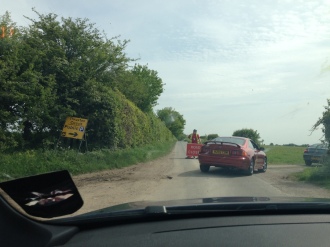 Record crowd on the day.

How many people does it take to park one car?

Anyway, the circuit itself. What became immediately obvious is that, given the high-speed nature of the vast majority of Thruxton’s course, only a small percentage is accessible and relevant to spectators. Realistically, the Campbell/Cobb section or Club chicane at the end of the lap are the only real viewing points available. The rest of the track is off-limits, meaning everyone is essentially shepherded into two sections. Contrast this with Oulton Park or Croft, for example, where around 75% of the track is accessible to spectators.

This isn’t necessarily Thruxton’s fault. The fast, flowing, nature of the track means overtaking is relatively uncommon on the quicker sections anyway. In essence, the two main viewing areas are the only places you’re likely to witness actual passing. Adding two big TV screens means spectators can keep tabs on the rest of the track too – Croft, take note.

For BTCC race one, we made the mistake of finding ourselves in the infield paddock area. Viewing from the inside of the first corner, Allard, was essentially pointless due to the height of the barriers. Whoops. Race two was better, viewing the action from the hill running along the outside of Seagrave. This actually gave a good view all the way down to Campbell/Cobb section and even part of Allard. A good spot, if quite a trek and miles from the rest of the facilities.

Our hike out to Seagrave did also highlight other parts of the Thruxton infrastructure in need of modernising; a Daewoo Nubira serving as a fire tender. No, seriously a Daewoo Nubira with a water tank in the boot. When the Ginetta GT4 SuperCup car of Dan Norris-Jones started to smoke heavily, he pulled off the circuit to met by a group of marshals. They summoned the Daewoo from the infield, which set off with alarming speed to the point where its driver nearly rolled it when taking a sharp bend. The attempts at trying to extinguish the smoking Ginetta would have been comical, were it not for the impending danger and the destruction of Norris-Jones’ race car. Hearing Norris-Jones shout “don’t f**cking open that, that’s the fuel door!” to the marshals suggested we should probably move away quickly.

I understand that marshals are volunteers, and motorsport simply wouldn’t happen without them. However, witnessing the worrying incompetence in controlling a minor fire and the resulting damage from dry-powder and foam to Norris-Jones’ race car left us asking serious questions about safety.

Up close; Ginetta continues to smoke despite work by marshals 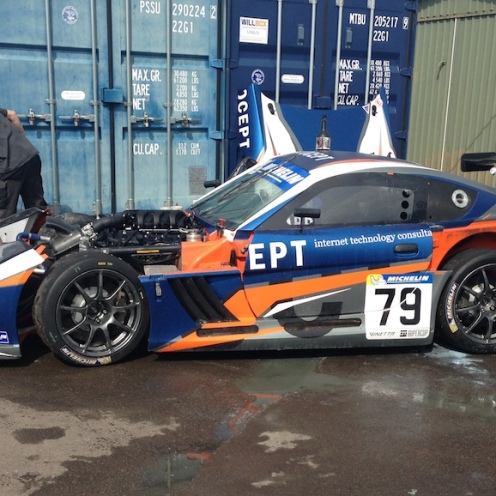 The damage to Norris-Jones’ car afterwards. Talk of what bits were “salvageable” going on.

Those questions would be brought even further to light, with the huge accidents suffered by Nick Foster, Ollie Jackson and Simon Belcher at the high-speed Church corner in three separate incidents. That the cars of both Foster and Belcher vaulted the barriers, and Jackson’s ended up embedded in trees at 95 mph, suggests work urgently needs to be done to improve the integrity of the barriers and provide adequate run-off. Thruxton has defended the safety of the track, with Managing Director Bill Coombs stating that they do not wish to lose the character of the circuit, and that the run off at Church is sufficient given that “when accidents do occur, drivers are thankfully able to climb out of the car and walk away.”

ESM would respectfully beg to differ. Regardless of the fact all three walked away, thankfully, unharmed both Jackson and Belcher are now in the position of not being able to compete at Oulton Park due to the damage suffered.

All in all, this really didn’t do much to give a great impression of Thruxton. Despite a record crowd at the weekend, there was something lacking in atmosphere compared to other circuits. It’s hard to put your finger on, but both ESM’s BTCC Correspondent and myself could only sum things up as feeling “flat” against the usual excitement felt. Perhaps it was having to pay an extra £7 to get into the paddock; maybe it was the general lack of drivers spotted, or could it have just been that the traffic put us both in a bad mood?

Positives? Food and drink were the most reasonably priced and varied in options that I’ve seen at a race track. As noted above, the big TV screens were useful. Oh, and a Colin Turkington win in race three watched from the banking on the outside of Allard. The view from here was good, showing the start/finish straight, pit garages and the cars running down to the Campbell/Cobb sequence. Definitely the place to be, but you need to get there early in order to bag a spot.

What is strangest about our experience is that the British Automobile Racing Club (BARC), who owns Thruxton, also owns ESM’s local Croft circuit. Visiting Croft is a world away from Thruxton. Things feel organised, the track is accessible, there’s a real sense of atmosphere and even the traffic is well-managed (to a point) in comparison. Perhaps it is the fact that Thruxton is only allowed 12 days of motorsport each year that the investment in infrastructure hasn’t been made?

But as the headquarters of the BARC surely this should be the jewel in the crown? Right now it still feels very much like the BARC has just moved in during the 1960s, with pebble-dashed buildings and narrow pit garages. Compared to the money invested by MotorSport Vision at the circuits it owns, there’s a real gulf between the two companies at present. Money is always tight in motorsport, and the limited running allowed at Thruxton will obviously affect the amount that can be invested. It’s a catch-22 situation, but one that left us somewhat disappointed.

In short, EngageSportMode probably won’t be returning to Thruxton in the near future. It may be that Croft Circuit has spoilt us, but the BARC need to learn a lesson from its northern outpost and try to find the cash to update its headline track. Oh, and perhaps sorting out the barriers at that Church corner too.

Our full review of the on-track action from our BTCC Correspondent will be along soon.