SEAT might have thought they had the production FWD Nürburgring lap record in the bag with the new Leon Cupra. But, not one to be beaten, Renault have reclaimed their crown with an even more modified version of the Megane 275 Trophy; the Trophy-R.

What does the ‘R‘ stand for? Who knows; racing, ‘ring, really quick? Either way, it doesn’t matter. Putting that aside for one minute, on the 15th May 2014 Laurent Hurgon drove the 275 Trophy-R to a record lap of 7 minutes 54.36 seconds – some 4.44 seconds faster than the Leon Cupra’s time. Does 4 seconds really matter over a 13 mile circuit, and does it have any real relevance to normal driving? We’re not sure yet, but let us indulge Renault for the time being.

To take back ‘its’ record, Renaultsport went to town on the already modified 275 Trophy which we featured last month. It keeps the same tweaked 2.0 litre turbocharged four-cylinder engine, making 271 bhp and 257 lb-ft of torque in sport or race mode. Along with that ECU upgrade for more power, there are trick Öhlins adjustable dampers, bespoke Michelin Pilot Sport Cup 2 tyres and a limited slip differential.

But it’s more about what the Trophy-R has lost, rather than gained; it’s been on a diet to remove 100 kg compared to the regular Renaultsport Megane, for a kerb weight of just 1,280 kg. So just how exactly has Renaultsport carved so much from a 1,381 kg hatchback? With this shopping list of savings:

There’s probably a myriad number of other tweaks and modifications Renault has made to the Trophy-R along the way to carve out every last gram of mass possible. In short, it’s a major undertaking but comparable to the modifications made to the Leon Cupra 280, and also to the ones made to the Megane R26R back in 2008.

Despite the fairly small time advantage, where Renaultsport has scored a marketing goal over SEAT is by offering an almost exact replica of the record-setting car for sale. It won’t be cheap though; just 30 examples will be coming to the UK, and the price starts at £36,430. Yes, that’s £36k for a Renault Megane. The price doesn’t include the ‘Nürburgring Pack’, comprising the ‘Performance’ braking kit, lithium-ion battery, Sabelt safety harnesses, four spare wheel covers and a retaining strap which you’ll need to fully replicate the record-breaking car. We can’t imagine it being cheap; you’ll need to wait until September to find out, so get saving now.

Basic, but lots of lovely Alcantara 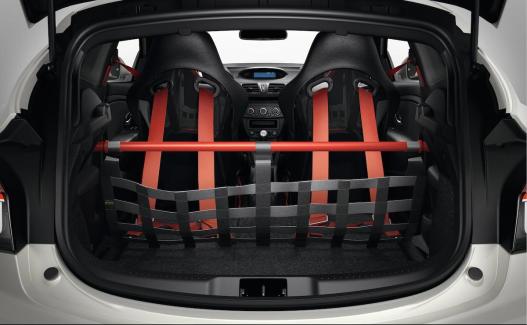 Plenty of room for shopping. Or 4 trackday wheels and tyres.

What this does prove is that turning a FWD hot-hatch into a sub 8 minute ‘ring runner is not a cheap or easy thing to do. Which does start to question the relevance of it all. The 275 Trophy-R, and the technology it packs, is starting to resemble more race, rather than road, car. With enough time and money, along with a professional racing driver, you could feasibly make any hatchback a contender. It also begs the question of how soon did Renaultsport realise that the regular 275 Trophy wasn’t going to cut it?

Although the price is steep, EngageSportMode has little doubt Renault will manage to sell all 30 275 Trophy-R examples coming to the UK. We love fast Renault’s in this country and, despite the price, you can guarantee the Trophy-R will find a home with collectors and trackday enthusiasts. Whether it’s strictly relevant or not, you have to admire the 275 Trophy-R for just existing in the first place.

So well done Renault; Nürburgring Norschleife production front-wheel drive record holders. Until Honda comes along with the next Civic Type-R, or Ford with a Focus RS or… etc.