A lighter, fitter, Bentley based on an already successful race car? Sounds almost impossible to believe, but it’s real and as of today you can get your name down for one. 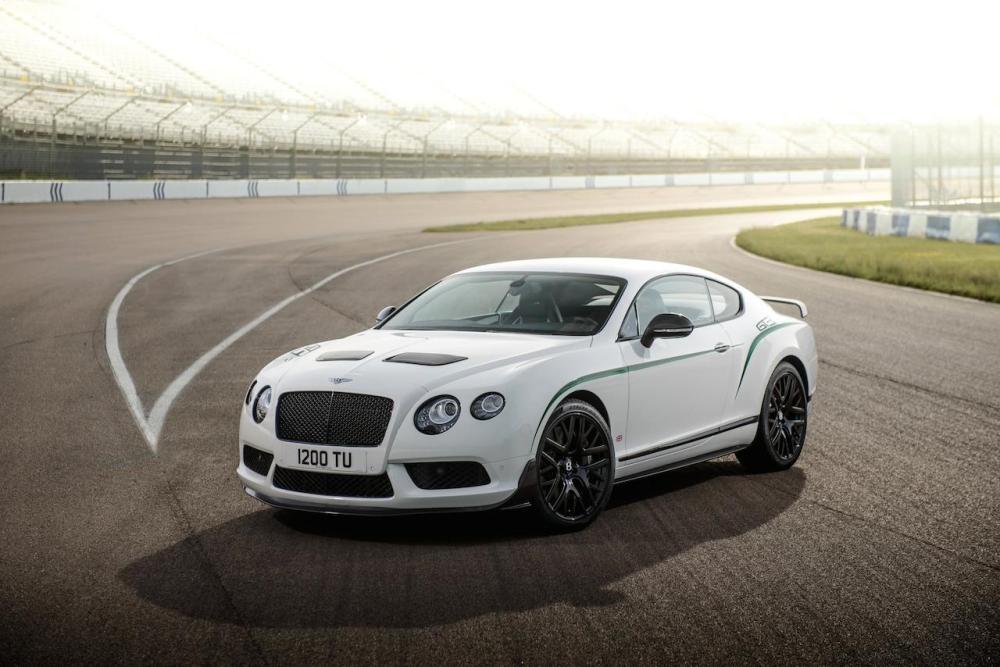 If you didn’t know, Bentley has turned the Continental into a genuine GT racer.  It currently competes in the Blancpain Endurance Series alongside cars such as the Audi R8 LMS and McLaren MP4-12C. Furthermore, the GT3 Bentley actually won at Silverstone last month, in only the second outing for the M-Sport developed car. So, with that out-of-the-way, what is this GT3-R we’re now being offered?

Essentially, it’s meant to be the road-going equivalent of the GT3 racer. Based on the Continental GT V8 S, the GT3-R follows the same pattern as the Renaultsport Megane featured yesterday; adding power and taking away weight. In fact Bentley have taken away 100 kg from the Continental GT, just like Renault did with the 275 Trophy-R. It’s just that Bentley had a starting point of almost 2.3 tonnes to work with, rather than the 1.4 tonnes which Renault had. So, at a kerb weight of 2,195 kg, it’s still rather hefty.

But you can’t expect Bentley to turn the GT3-R into a stripped out lightweight trackday machine. For all the sporting pretensions, it is still first and foremost a Bentley. Which decrees a certain level of fit, finish and refinement. There are no plastic windows or roll-cages here. But, instead, you do get a 4.0 litre twin-turbo V8 engine that produces 572 bhp and 516 lb-ft of torque – the latter from just 1,700 rpm. Thanks to the 8-speed auto’ gearbox’s shortened gear ratios and AWD, that’s enough power for 0-60 mph in 3.6 seconds, and top-speed of 170 mph. Sound is played out through a titanium exhaust system that saves 7 kg of weight, and has been tuned to deliver a ‘unique baritone roar’ from the tailpipes. Ooh!

Bentley would also like to make it clear that this is not just an over-engined muscle car. It claims that the GT3-R represents the most dynamic road car it has ever built. The all-wheel-drive system uses torque vectoring, to distribute twist between the rear wheels individually, which should allow more ‘enthusiastic’ cornering. In addition, the air suspension is further tuned from the GT V8 S to give sportier handling, and there are 21″ lightweight alloy wheels wrapped in high-grip Pirelli tyres. However, our favourite piece of news is that the sport mode setting has been enhanced ‘for more spirited driving’ situations. We approve of this.

Braking is done by a carbon ceramic system, with huge 420 mm discs gripped by 8-piston callipers at the front. At the rear, there’s smaller 356 mm discs, with both axles sharing callipers painted green. The GT3-R’s Electronic Stability Control has also been retuned to support the more enthusiastic driving mindset.

All 300 of the GT3-R examples to be sold will come in Glacier White, with the distinctive green side-graphics and carbon fibre detailing. The use of carbon extends to the jutting front splitter, fixed rear wing and new bonnet vents. Gloss black is used for the distinctive headlight units, radiator matrix grille, door strips and window surrounds taking further influence from the race version. We could probably take or leave the green decals, but otherwise EngageSportMode thinks the styling additions are rather good.

Inside, there’s a lot more green detailing. In fact the vivid colour is used as contrast stitching for the Beluga Black leather/Alcantara quilted seats, gets splashed across the dashboard, is on the centre console and even the steering wheel. It’s certainly bright, and adds a definite sporting touch to the GT3-R’s interior. More race inspiration is found in the use of Alcantara for the steering wheel and gear knob, whilst carbon fibre makes an appearance across the dashboard fascia. Of greatest significance are the lack of rear seats; clearly this is meant to enhance the sporting image, but it’s also probably an effective way of shedding some extra weight. You’ll only be able to bring one friend along for the ride in the GT3-R.

Although the order books might be open, Bentley hasn’t yet confirmed the price of the GT3-R. But given that the GT V8S retails for just under £140k, realistically £150-160k seems realistic. If it helps, you will get three years/30,000 miles worth of servicing thrown in for free. First cars will reach customers in late 2014, and if you want to see it in person before putting your money down, it’s probably worth heading to the Goodwood Festival of Speed next week.

We expect a lot of people will slate the GT3-R for being too heavy – it is – and for essentially being another plaything for footballers returning from the World Cup to console themselves with. However, at ESM we’re willing to stick our necks out and say we like the GT3-R. It makes a genuine link with a, successful, on-track race car and adds just enough extra features to justify its existence. We just pray at least one owner has the guts to take it to a trackday and terrify everyone else there. Good work Bentley.