Whilst watching Le Mans this year – we’re mentioning it again, sorry – I was captivated by the noise of the Chevrolet Corvette C7.R every time it appeared on camera.

Honestly, if you need proof then check out this video by Pratt & Miller, the team responsible for building the epic C7.R racer. It’s really rather awesome. So we thought we’d just take this opportunity to share some Corvette photo love because, as well as sounding amazing, we have to say the C7.R looks seriously aggressive, even by race car standards. 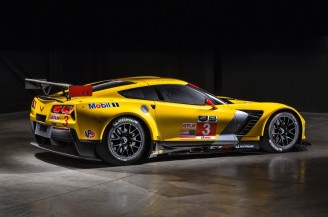 From the ridges in the bonnet, to the reverse-wedge shaped cockpit and dramatic rear arches there’s no part of the C7.R that doesn’t look toned or athletic. In fact, if you painted it black it wouldn’t be a million miles away from the car Batman might use if he ever decided to enter sports car racing. To be fair, he fits the profile of GT Am gentleman driver quite well; you can have that idea DC Comics.

More impressive is the fact the regular Corvette Z06 and Stingray Coupe don’t look too dissimilar to the racer. Granted there’s no giant rear spoiler, but beyond that there’s not as many differences as you might imagine. More importantly, you can actually buy one here in the UK, as the Corvette is now officially sold by Chevrolet with a starting price of £61,520. To put that price into context, it’s about £117,000 cheaper than the equivalent Ferrari 458 Italia which just pipped the C7.R to a GTE Pro class win at Le Mans this year.

When it comes to the Corvette’s pedigree, it’s worth remembering that the ‘Vette is currently celebrating its 60th anniversary. Come Monday (30th June) and it’ll actually be 61. Fact. Chevrolet UK have just produced this neat little site to let you scroll through the history of the Corvette, hear the engines from each generation and play around with their styling. Also, you can configure your very own C7 Corvette Stingray; we just wish they offered it in orange! Give it a go, and let us know which Corvette generation is your favourite.