Let’s be honest, we’re probably best off adding the phrase “at the Goodwood Festival of Speed” to anything regarding hot hatches this week. After Ford and Honda, here comes Peugeot with their special edition GTi launched there today. There’s more than meets the eye with this one though. 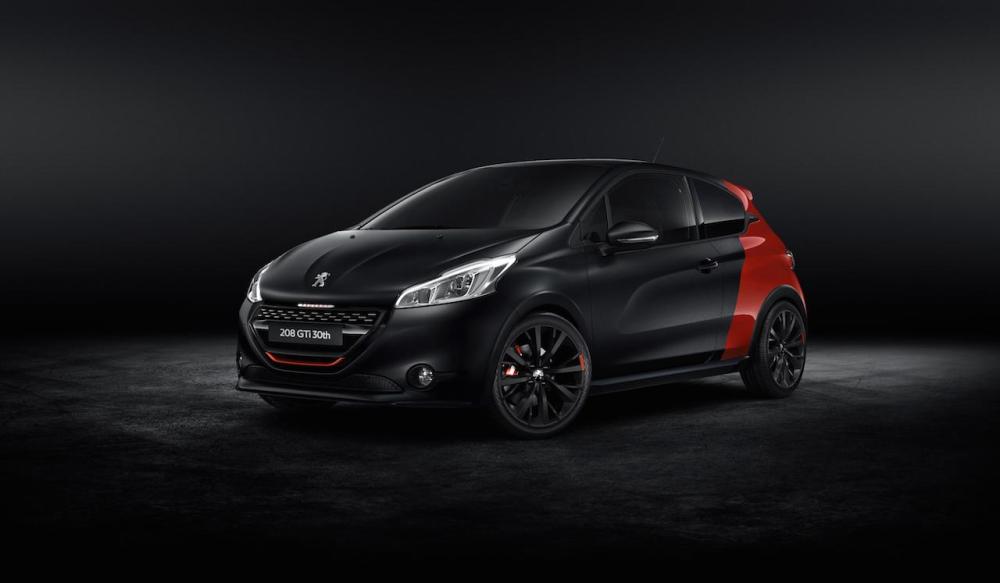 1984 was a particularly good year although, with this writer’s impending third decade fast approaching, I would be inclined to say that. However, it also marked the introduction of Peugeot’s iconic 205 GTi; the model virtually every fast Peugeot, and hot hatch in general, has been benchmarked against by motoring journalists ever since. So, to commemorate such a substantive piece of automotive history, Peugeot has created this 30th Anniversary limited edition version of the 208 GTi.

Let’s get the obvious out-of-the-way; that two-tone colour scheme. We’ve already seen Peugeot use this on the 308 R concept from last year, and we weren’t particularly a fan then. The textured black and high gloss red are divided by a coupe tranche: an oblique straight line. If we’re being honest, it reminds us a little too much of dip dye ombre hair. Luckily single tone Pearl White and Ruby Red options are available too.

Chrome trim on the regular GTi is replaced with matt black, covering the grille surround, fog light bezels and window surrounds. The wing mirrors also get the matt black treatment, as do the side skirts and wheel arch extensions; themselves housing matt black 18″ alloy wheels. Inside there are black Alcantara bucket seats, gloss black trim and a unique numbered plaque saying which 208 GTi 30th you’ve got.

Exterior meddling aside, it’s under the skin that the 30th Anniversary becomes quite a serious prospect. Most impressive is the fitment of the six-speed gearbox and Torsen Limited Slip Differential from the RCZ R coupé. Clearly Peugeot aims for this GTi to be able to take on track day action with ease. Matched with a power boost to 205 bhp and 221 lb-ft of torque, 0-62 mph arrives in 6.5 seconds – a 0.3 sec reduction. Emissions from the 1.6 litre THP four-cylinder engine stay at a competitive 125g/km, meaning the GTi 30th is still a relatively frugal machine.

The suspension has been lowered by 10mm, with front and rear track increased by 22mm and 16mm respectively. Those 18″ wheels are actually 0.5 inch wider, and are combined with reworked suspension geometry and recalibrated steering. Braking is via 328mm discs at the front, with Brembo four-pot calipers.

Peugeot is on something of a roll at the minute, with that – slightly controversial – Car of the Year award for the 308 and Sebastien Loeb’s record-grabbing 208 Pikes Peak car. Adding the substantial changes made to this latest 208 GTi 30th Anniversary, there’s no denying the intent of the French brand to make a statement after a while in the wilderness.

After its Goodwood reveal, the 208 GTi 30th Anni will get a full public airing at the Paris Motor Show in October, with sales expected to start in November 2014. Pricing and full equipment to be announced later, but change from £20,000 would be a good start.