At last year’s Goodwood Festival of Speed, Jaguar showed off a lightweight concept version of the F-Type Roadster. Public response was so good that they’ve decided to build it as a limited edition to showcase JLR’s new Special Operations team. Enter the fastest and most powerful production Jaguar.

The overarching aim of the car is to show off that the recently formed Special Operations team is not just about sticking extra bits to regular Jaguars, but is about thoroughly re-engineering them. Project 7 showcases just that, with a fully road-legal roadster that adds power, reduces weight and gains retro touches over the regular F-Type. 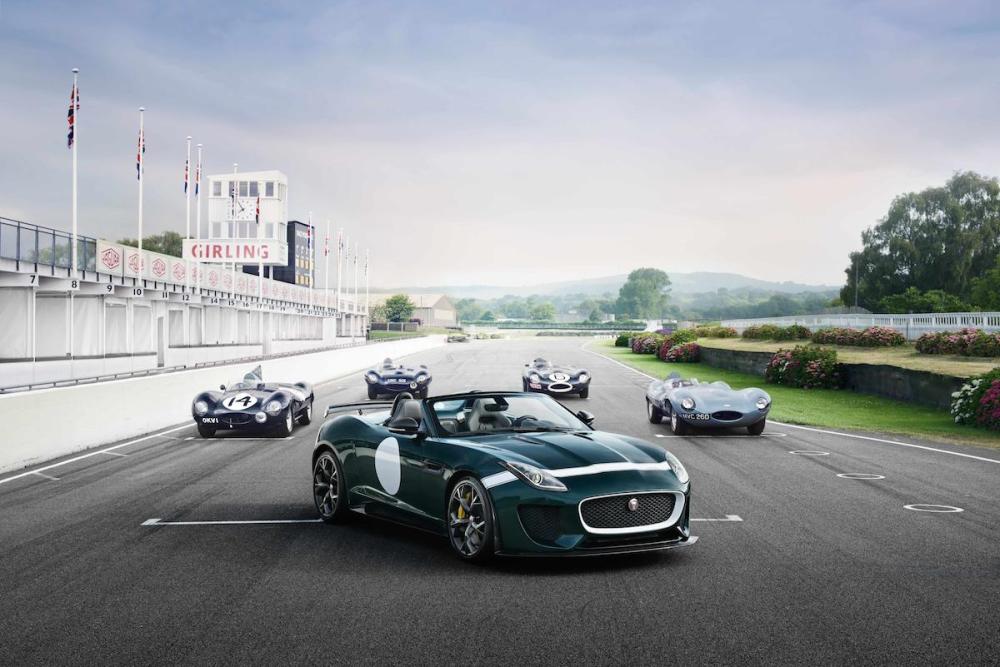 Most prominent is, of course, the aerodynamic fairing mounted on the rear boot deck which replicates the shape of the Jaguar D-Type racer. Project 7 celebrates the three Le Mans wins taken by the D-Type, whilst encapsulating the seven total overall wins the marque has had at the 24 hour race. If you’re wondering why the car wasn’t launched at Le Mans this year, it’s probably to do with the fact Jaguar wasn’t competing…

Along with the D-Type fairing, Project 7 also gains huge amounts of carbon fibre parts to complement the all-aluminium body. A new front bumper, splitter, side skirts and adjustable rear spoiler are all formed from the lightweight material. Less noticeable, but even more technically challenging, is the shortened front windscreen which emphasises the open-top feel. The regular F-Type folding roof is gone, replaced by a temporary fabric affair which can be folded up and stored in the boot when not needed. As a result of the chopping and changing, Project 7 weighs in at 1,585 kg; some 80 kg less than the regular V8 F-Type roadster. 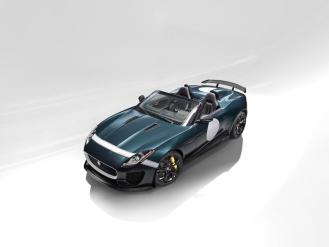 Power from the 5.0 litre supercharged V8 engine has increased by 25PS to 575 PS (567 bhp) over the normal V8 S, with torque at an impressive 502 lb-ft. Fed to the 20″ rear wheels through an eight-speed ‘Quickshift’ automatic gearbox and electronic locking rear differential, 0-60 mph takes 3.8 seconds with a limited top speed of 186 mph. At that top speed, the aerodynamic adornments of the project 7 car mean it’s producing 177% more downforce than the equivalent F-Type! Clearly the carbon bits are not just for show.

Height adjustable suspension, bespoke front suspension knuckles and new anti-roll bars join a recalibrated Active Dynamics system that adjusts the dampening system up to 500 times a second. Although lacking a sport mode, Project 7 does at least have a configurable Dynamic Mode to tailor car settings to individual preference. Carbon ceramic brakes come as standard, with 398 mm front and 380 mm rear discs which links to Jaguar’s Torque Vectoring by Braking system to sharpen the car’s line through corners. We’d also imagine that, combined with the locking differential and Active Dynamics system, all this will allow for some proper drift action. 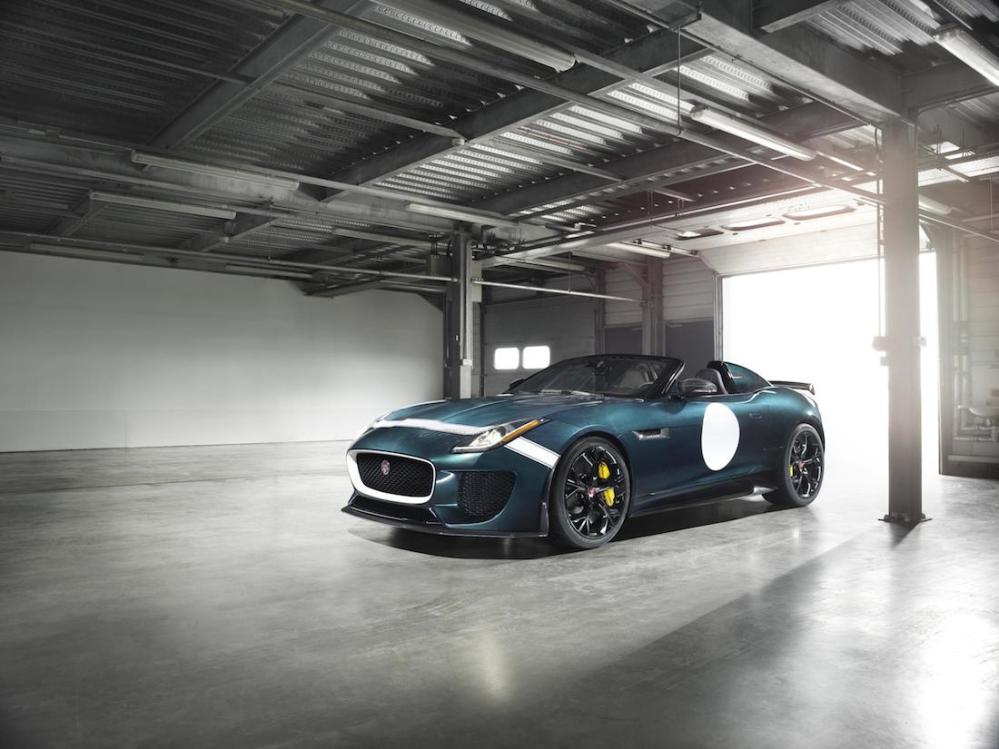 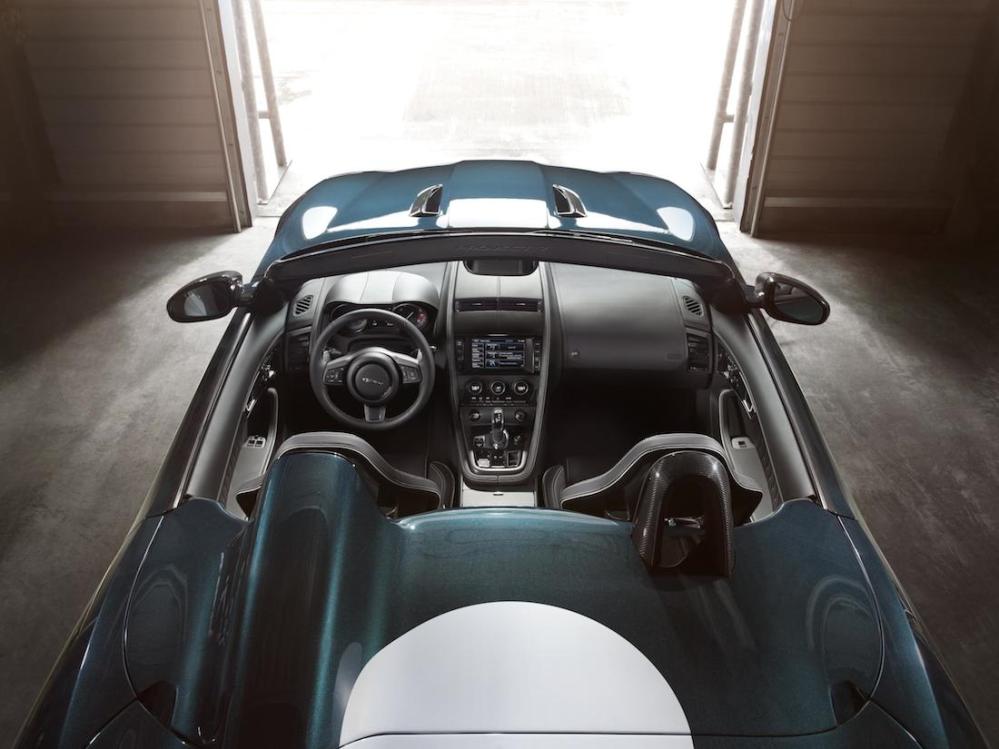 Each of the 250 cars will be hand-built to order by the Special Operations team, will be offered in five colours (Ultra Blue, Italian Racing Red, British Racing Green, Ultimate Black and Glacier White) with optional decal stripes as shown in the pictures. UK pricing is set to be £135,000 which, is quite substantial and pitches the F-Type Project 7 into competition with cars such as the Audi R8 Spyder. However, Jaguar will argue that the limited edition bespoke nature of Project 7 easily justifies the figure. We’ll see. Potential buyers can place orders now with first deliveries expected mid-2015. 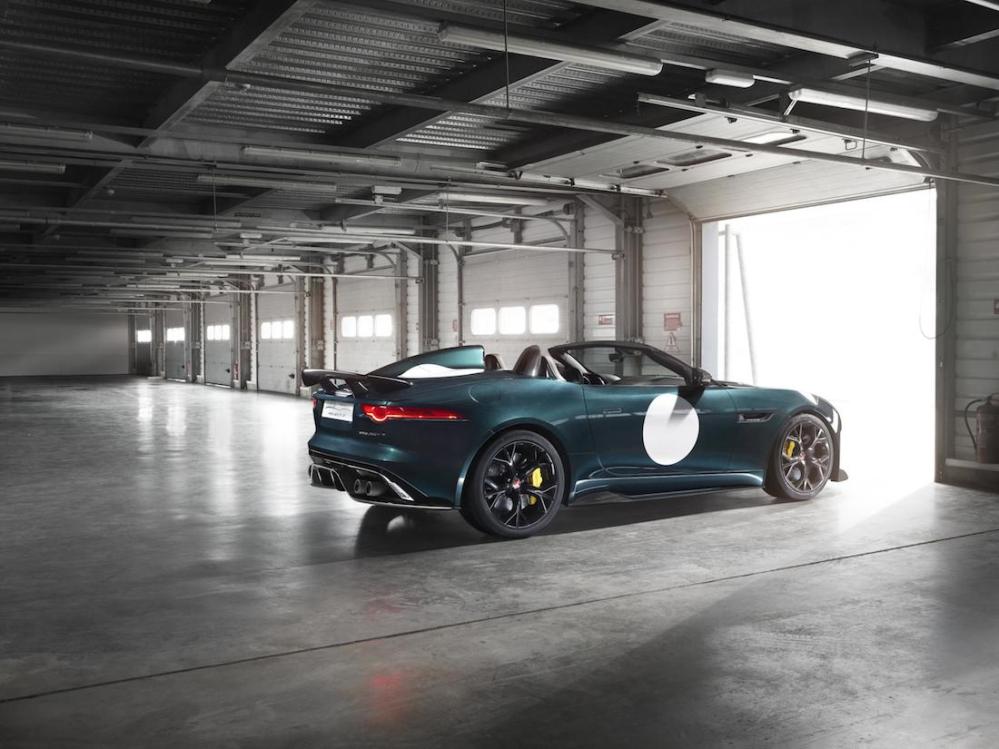 The F-Type Project 7 is due to make its official debut at the Goodwood Festival of Speed, which begins today, but you can also check out the launch video here.