Can you believe the Ariel Atom sportscar has been in production since 1999? Nope, neither could we. But, after over 15 years, the Somerset-based firm has now revealed the even crazier Nomad that follows the Atom tradition of low weight design. 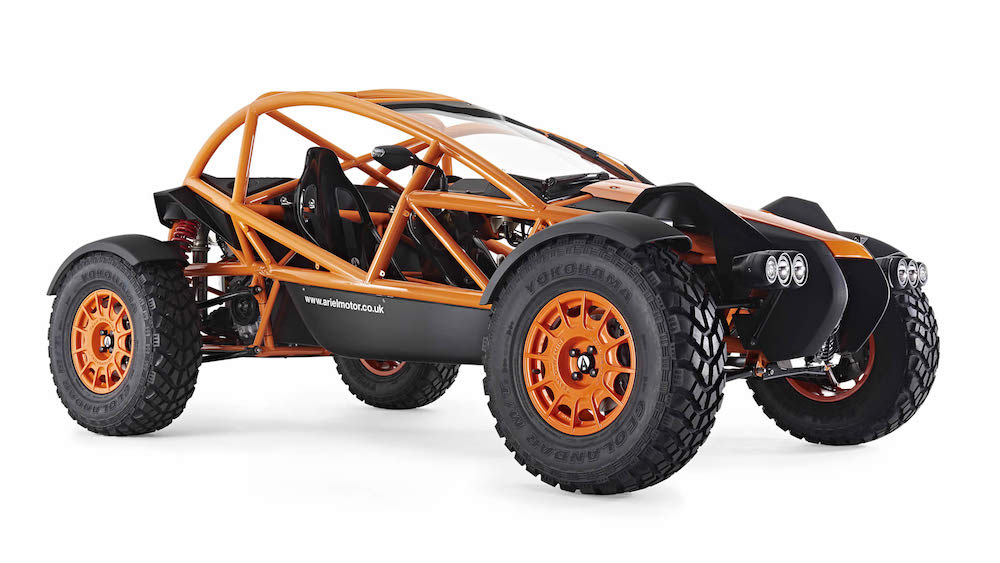 A low-weight off-roader is usually considered to be something of an oxymoron. With the onward marching dominance of the SUV market, we’ve almost become accustomed to assuming you need a kerb weight of over 2 tonnes to keep up in the rough stuff. The Ariel Nomad throws that idea out the window, tipping the scales at only 670 kgs.

Although that’s somewhat believable when you look at what isn’t there. Like the Atom there’s very limited bodywork, with just a smattering of plastic panels. EngageSportMode naturally approves of the very orange exoskeleton and wheels. Realistically, you’re going to need a decent set of waterproofs, and probably a helmet, should you really want to avoid getting covered in mud! A windscreen is optional should you want to make some attempt at keeping clean.

Performance is almost as crazily rapid as the Atom, with 0-60 mph taking only 3.4 seconds. Top speed is capped at 125 mph; with those knobbly off-road tyres we imagine that’d be more than adequate for most people. Power comes from a Honda-sourced 2.4 litre four-cylinder engine, making 235 bhp and 221 lb-ft of torque. Driving just the rear wheels, through a six-speed manual gearbox, there’s clearly going to be the chance to get very sideways in a car weighing less than 700 kgs. Check Ariel’s YouTube video below if you have any doubts:

Standard pricing is set to be around £27,500 plus VAT, with a lengthy list of options to personalise your Nomad. Need a winch fitting at the front? Ariel offer that. Want a 6-foot LED illuminated aerial to complete the beach-buggy look? Yup, you can have that too. There’s also a number of competition orientated parts, should you wish to turn your Nomad into a true racer. We also wonder how long it’ll take before we see a 500 bhp V8 version…

Nobody needs an Ariel Nomad, but it’s a wonderful plaything if you have the cash. It’s also another great piece of British engineering that we’re proud to see being built in the UK.