By the time you’ll be reading this, the 2015 Formula 1 season will have already started with the first practice sessions in Melbourne. New for this F1 year are a brand new Safety Car and Medical Car – here’s the lowdown on them both.

Mercedes-Benz has been supplying the Official Safety and Medical cars to Formula 1 since 1996. It’s an almost sure-fire way of guaranteeing that a Mercedes leads at least some of the Grand Prix, whatever happens. Plus, with the introduction of the new 1.6 litre turbocharged F1 engines, it gives fans a car worth listening to also.

Replacing the outgoing SLS AMG GT Safety Car is, predictably, its actual model lineup replacement in the shape of the Mercedes-AMG GT S. So that brings a glorious 4.0 litre turbocharged V8 engine producing over 500 bhp. Perfect for going fast enough to make sure the brakes and tyres on F1 cars don’t get too cold when they’re following behind. Carbon-ceramic brakes sit behind lightweight multispoke wheels, and the LED light bar atop the roof has been aerodynamically designed to minimise drag. There’s also not one, but two, iPads fitted in the cockpit for Pete Tibbets to play with whilst Bernd Mayländer hammers around the track. Most important of all is the special ‘performance exhaust’ designed for maximum loudness.

Continuing the run of C Class medical cars, is the all new 2015 C 63 S AMG Estate. Using the same 4.0 V8 engine as the GT S safety car, but with even more torque (516 lb-ft) the C 63 is able to get to the scene of the next Pastor Maldonado incident without delay. It too has a louder exhaust system fitted, along with carbon-ceramic brakes and suspension tuned to cope with four occupants and the weighty medical kit they carry. 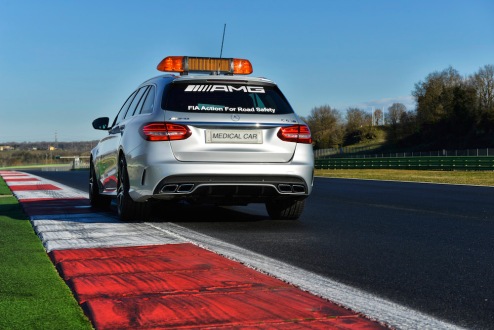 Although nobody necessarily wants to see the Safety Car, and especially not the Medical Car, making an appearance on a race weekend it’s comforting to know that Mercedes has given them the best tools for the job. Oh, and also given the spectators trackside something to enjoy aurally.