With the BTCC rolling into Snetterton for the special Diamond Jubilee weekend, we’ve cast our mind back to recap the previous rounds at Croft.

Colin Turkington will be feeling pleased with his latest consistent performance as he heads into the summer break after extending his lead at the top of the championship to 19 points, following the latest rounds at Croft. However, Turkington wasn’t the main talking point; it was the resurgence of Team BMR’s Subarus.

With reigning champion, Ash Sutton, without a podium this season and with Jason Plato without even a single point, it came as a huge shock to everyone that they secured a 1-2 in qualifying. Turkington dealt well with the weight and used the rear wheel drive of the BMW to his advantage to secure 6th, whilst his closest championship challengers, Adam Morgan and Jack Goff could only secure 22ndand 26th.

Race one:  Sutton got away well from the line as Jordan jumped Plato and Tom Ingram moved ahead of Sam Tordoff into 4th. However, the race wasn’t live for long as a mixture of many cars heading into Clervaux, the first corner, ended in disaster for Rob Austin and Stephen Jelley, resulting in a few laps of the safety car. Sutton re-started the race well and looked comfortable until the final lap or two when Plato, who’d regained 2ndfrom Jordan earlier in the race, closed up.

During the race, Turkington defended well from Rob Collard and Josh Cook, Morgan suffered terminal damage and Jordan, who’d been suffering from oversteer all race, finally overcooked it and spun, before recovering to 10th. It was a fantastic result for Subaru, while Ingram took the final step on the podium. Race rating: 6.5/10

Race two: Plato was a little over-eager to get the second race of the day started and ended up with a drive through penalty as a result of his jump start. Ingram’s legal start propelled him from 3rdand into the lead on an incident packed opening lap which included a spectacular brake failure for Cook as he flew off into the field at Tower. Ingram’s lead only lasted a few laps though, before Sutton made a late, but clean, move on him at the hairpin.

Despite debris being scattered over the track in several places, the race continued and Turkington closed on Ingram for 2nd, although despite his best efforts, the positions remained as so until the end of the race. There were several close battles throughout the field too. Collard suffered a late puncture, Matt Neal continued to gain places and Plato made several places after his penalty to make it into the points for the second time this season, despite 66kg of ballast.

Interestingly, despite a couple of drivers having won two races this season, Sutton became the first double winner on a single day this season. Who would ever have predicted that at Oulton Park? Race rating: 8/10 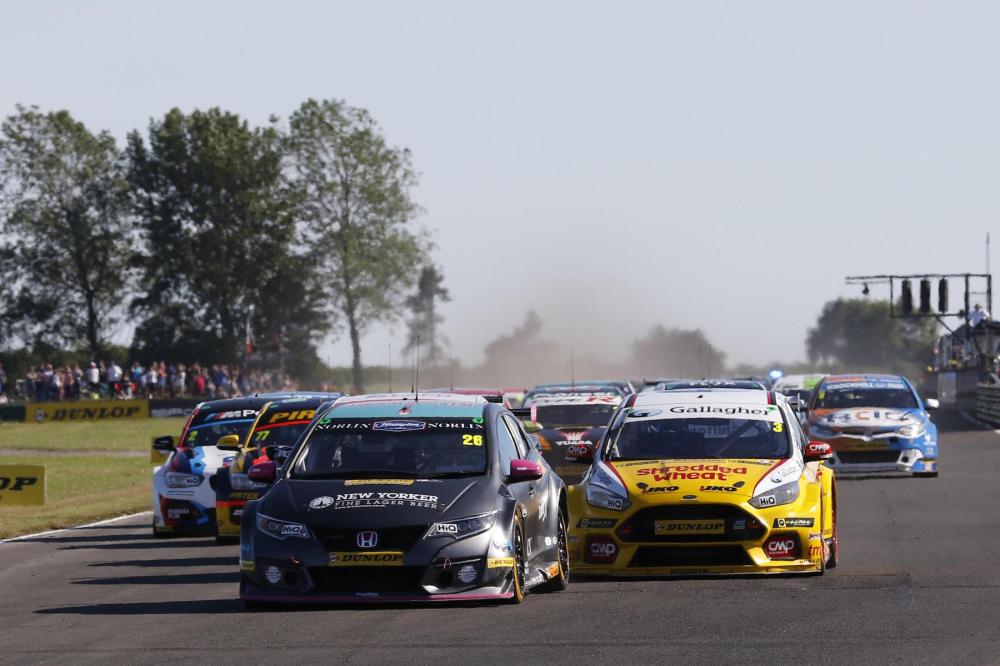 Race three: Dan Lloyd was the lucky man to be chosen on pole by BTCC legend John Clelandand Lloyd made no mistake as he secured his, and BTC Norlin’s, maiden win in the championship. Tom Chilton jumped ahead of Senna Proctor and Neal at the start and remained there for the rest of the race, but his challenge for the lead slowly slipped away and towards the end he was just managing to hold on to 2ndfrom Proctor, as his tyres had given up.

Earlier in the race, Proctor had quite a queue behind him, which included Sutton. Mid-race, Sutton made a move on Neal for 4th, but Neal immediately responded at Clervaux, although it forced Sutton off into the gravel and following a small tap of the barriers, he continued. He then was all over Jordan, but could only find a way by after a little tap as he ultimately finished 6th.  A great final lap saw Ingram overtake Tordoff and Turkington challenge Neal whilst defending from Sutton and five cars basically crossed the line together for the squabble over 14th. Race rating: 6/10

After Oulton Park, I was scathing of Subaru’s performance, citing they had ‘no chance’ of a decent result at Croft, but humble pie must be eaten. However, other than those linked to Subaru, and even they must have doubted it, nobody could have seen this coming. Sutton had been outperforming the car since the opening round and how Plato managed to get a car that had finished no higher than 18thin any race to qualify and finish 2ndis utterly stupendous.

There has been an incredible amount of debate since Croft about how Team BMR achieved such success and whether it was in the rules, or even that the rules were eased to help them. However, it has been publicly stated that Subaru were only given a 20 millibar boost increase after engine engineers at Swindon found an anomaly in the way it was presented earlier in the season. Despite the boost increase, the Subarus were still not quick in a straight line, shown by the fact Sutton was 30thin one of the speed traps around the track.

In addition, Croft has always favoured rear wheel drive cars and again this was a factor in their unexpected success. Credit though must be given to BMR, as it would seem the biggest factor in their upturn in form was due to their new cooling package that has helped increase their speed. Their biggest test will come next time out at Snetterton where they will prove this was a one-off or a genuine upturn in form. Croft seemed to be a perfect mix for their cars.

Snetterton will see the 60thseason of BTCC celebrations take place, notably with the ‘Diamond Double’ race and double points available at base weight. Before Croft, only a fool would have given Sutton a chance of retaining his championship crown, but now, who knows? If Subaru continue their upturn in form, anything could happen, especially if he were to win the ‘Diamond Double’ and Turkington were to suffer problems. Realistically, you’d say Sutton’s challenge would be unlikely, but stranger things have happened.

Turkington’s rivals going into the weekend had a disaster with only a 12thbetween Morgan and Goff to show for their weekend’s efforts, as they dropped to 6thand 7thin the standings respectively. Ingram now heads the challengers, 19 points behind, but as mentioned the ‘Diamond Double’ race could really shake things up. It’s set to be a fantastically exciting second half of the season. We shall see.

Championship standings after 15 races out of 30: