Croft produced its usual variety of mixed weather to spice up the latest rounds of the British Touring Car Championship. Going into the event, Colin Turkington and Rory Butcher were tied on points and while one of the contenders had a good day, the other struggled.

Butcher’s race day was severely hampered by qualifying in 29thafter crashing during a completely stupendous session which had no less than five, yes five, red flags. Eventual pole sitter, Andrew Jordan, caused the final red flag and had his best time removed, but he already had enough in hand to be at the front from Chris Smiley, Tom Chilton and then Turkington.

Around 20 minutes before race one the heavens opened for a quick, but fairly heavy, shower to make the newly resurfaced circuit ‘interesting’. However, the short nature of the shower meant that all thirty cars still started on the slick tyre, albeit cautiously.

The top six made clean starts and were fairly comfortable in their positions to start with, apart from Jordan who immediately stretched out an ominous lead. After a few laps, Turkington started to pressurise Chilton in third, but without ever making a serious attempt to pass. Ollie Jackson’s Ford Focus was the latest to look a mess after clipping one of many stupidly placed Recticel barriers over the weekend and later went off under the safety car period after a problem with his front end.

The safety car was caused by the need to recover Rob Collard’s Astra after going off at Sunny. Several cars on the previous lap had slid at the same point suggesting a slippery track surface, perhaps caused by the rain and mud that was brought on to the track. Others would later become croppers too.

After many safety car laps, Turkington was soon all over Chilton again, but he defended extremely well from a car that was clearly quicker. Meanwhile, Jordan was comfortable in the lead throughout with Smiley never seriously challenging and his second was made fairly comfortable too as Chilton was too busy defending to challenge. Race rating: 6.5/10. 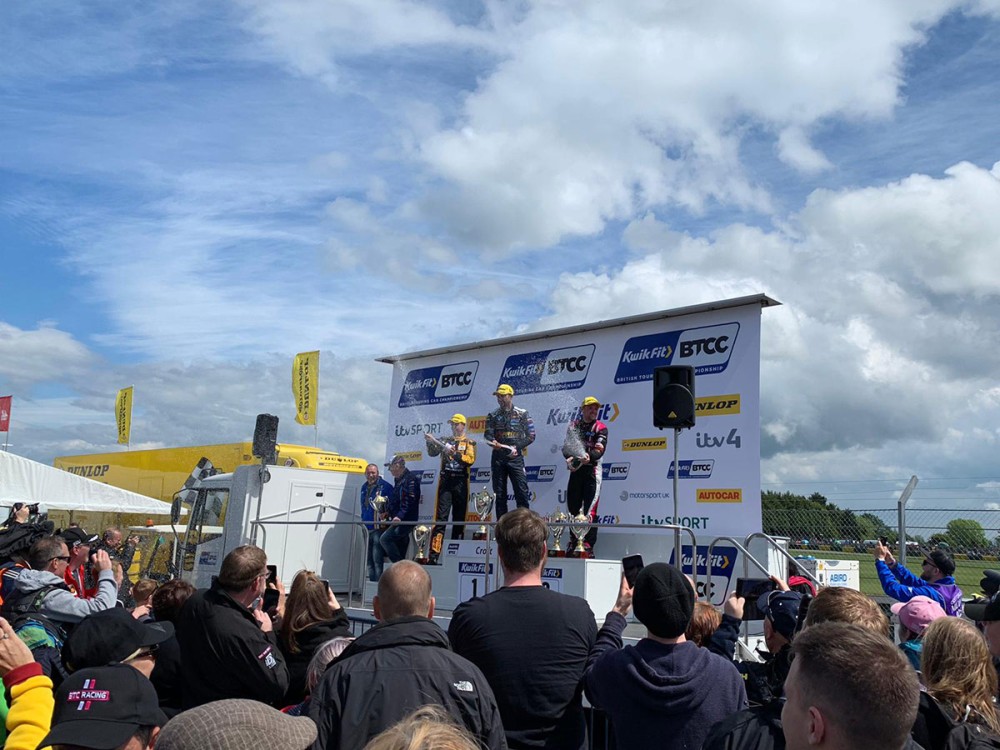 There was a fully dry track for race two and Jordan and Smiley got away well off the line, while Turkington jumped Chilton to go third. Chilton and Tom Oliphant then collided as cars streamed all over the track and eventually Oliphant was turned around and had to rejoin at the back.

By lap 3, Turkington was all over Smiley, with Dan Cammish in fourth closing in on the pair too. This continued for a couple of laps while Jordan, once again, zoomed off into the distance. However, after a great move by Turkington on Smiley, he set off after Jordan. 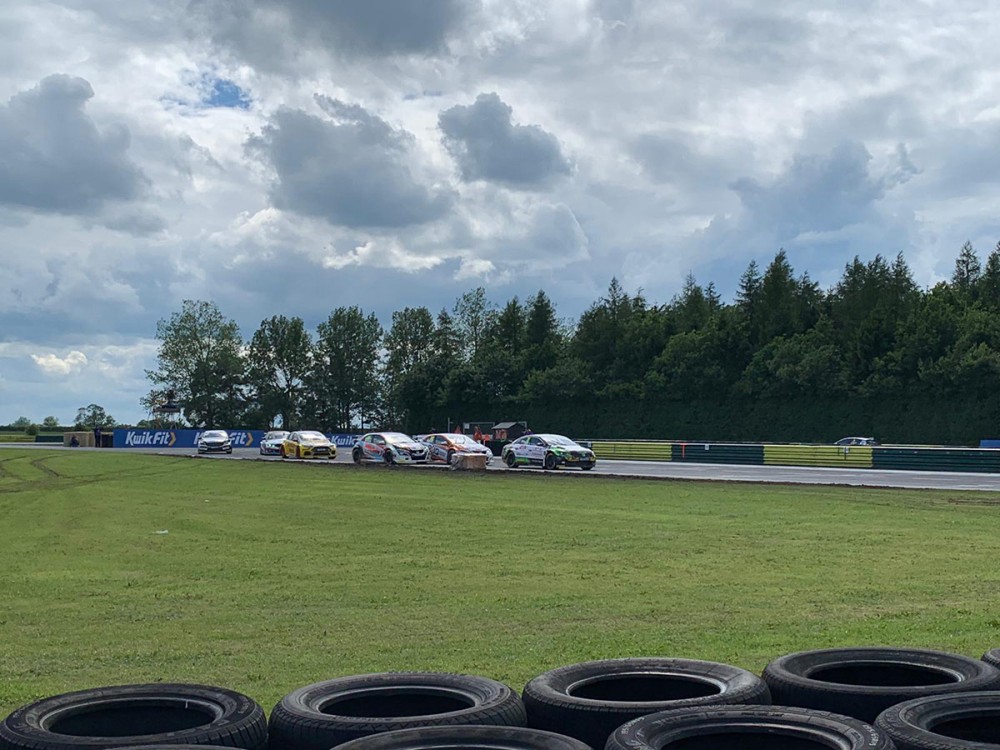 The speed of the BMW top two was ridiculous as the gap to Cammish, now in third, was eventually over ten seconds. Despite Turkington’s best efforts, and although he closed the gap on Jordan, he was never within distance of challenging him as Jordan secured a double double of race one and two wins.

Smiley however, was battling well with Ash Sutton as Jason Plato and Josh Cook caught up with them too. Despite a strong showing, the race was to end in disappointment for Smiley as Sutton challenged on the outside and as Smiley cut across Sutton, he was sent sliding across the grass and into the barriers. The stewards disagreed with that opinion and surprisingly placed the blame at Sutton’s door, handing him a five place grid penalty for the final race of the day. Race rating 6.5/10. 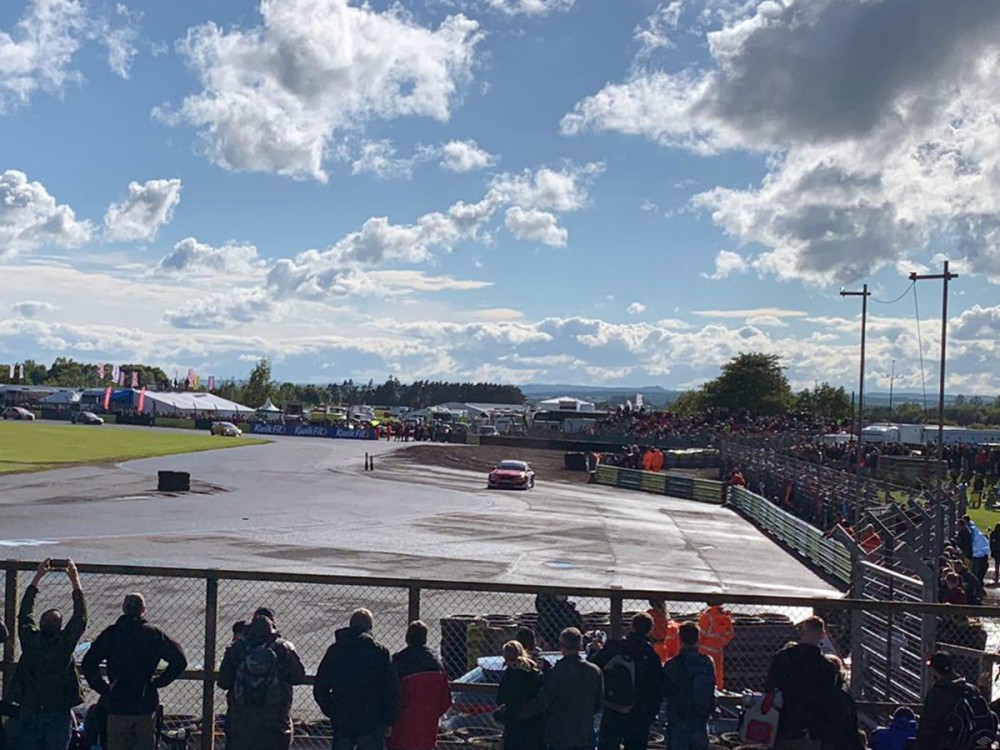 Just before the Porsche Carrera Cup race started, rain teemed down and it meant that only three cars started the race in their starting slots as the rest of the field dived into the pits to change to wet tyres. Although the rain had stopped for BTCC race three, there was still some confusion over which tyres to go for as the track was still very wet. The majority of the front runners went for wets, the majority of the back of the grid gambled on slicks with an exception here and there. The main exception was Tom Ingram, who lined up third behind Chilton and Cook, with Plato fourth.

Ingram knew that his first lap was about staying on the track with the hope that the slick tyres would come into their own quickly. However, he probably didn’t realise how poorly the slicks would grip in the opening laps and he went from third, down to the back end of the pack within a couple of laps as the gamble didn’t pay off.

Chilton, Cook and Plato started well and Jordan made a great start to jump up to fourth from ninth, although Matt Neal soon overtook him. There was a brief safety car period after Smiley crashed into Jack Goff, but despite the weather conditions, there weren’t really many major talking points as the wet tyres held on superbly from the entire race. It was only on the final two laps when Ingram actually went quicker than the leaders.

Sutton charged well through the field to take fourth and despite Plato’s best efforts to take second spot from Cook, he was unsuccessful. At the front, for the third time in the day, the leader, Chilton, had a fairly comfortable victory. In the championship hunt, a last lap move by Turkington on Jordan also allowed Butcher through as Turkington secured sixth. Race rating: 6/10.

As wet races go, the final one of the day was fairly disappointing from a fans’ perspective, but not for Turkington who now holds and eleven point gap at the top of the standings from Cook. However, the man who Turkington must be most fearing at the minute has to be his teammate, Jordan. As predicted at the end of the Thruxton review, Jordan did indeed grab pole position and another brace of victories, jumping him to fourth in the standings.

Since winning the championship in 2013, Jordan has never really shown that sort of form on a consistent basis, until now. I would suggest that had he not had the incident in the opening race at Donington, he would be leading the championship now. Jordan finally looks settled in the BMW, which, at this present moment, is clearly the best car on the grid, despite a small reduction in boost. I expect he will continue this form at Oulton Park, although he will have to carry more success ballast due to being fourth in the standings. Turkington will, of course, have to carry the most.

In the final race of the day, it was a delight to see Plato back on the podium again. For someone who holds the all-time record for race victories in the BTCC, it’s odd not see him on the podium more often and this was his first since Croft last year – his only one. The Astra is clearly improving this season and despite being a race winning car in the past, I think Plato could well be on the podium another couple of times before the season is out.

As we head to Oulton Park next, we reflect on Croft as having lots of potential and the right ingredients for an amazing set of races, yet it didn’t fully deliver. The intrigue was mainly around the weather, yet no-one produced a stunning drive from the back after taking a tyre gamble, there weren’t loads of safety cars due to crash after crash and in each race the leader was fairly comfortable. I’d like to predict more for Oulton Park, but after recent years, it’s become a fairly processional track.

Championship standings after 12 races out of 30: