What car would a Ninja drive? Maybe a Nissan Skyline GT-R for some knockout power or perhaps a Honda NSX for shuriken sharp handling? Or, what about an electric car; smooth and serene, thus allowing them to sneak up on their intended target without being heard? If so, the car ESM has driven today may be the Ninja’s new best friend.

A few weeks ago my mother told me she would be changing her company car. The options were not good. Currently she drives a diesel Mk5 Golf (not even the good 2.0TDi but the ancient engined 1.9TDi version instead), having turned down the option of a VW Jetta (bad move). But the new list consisted of…..a Toyota Prius, or a Toyota Auris Hybrid. This was far, far worse than a rattly diesel Golf.

Luckily, still being of sane mind, my Mam realised how awful the Prius would be and ruled it out straight away. This left only the Auris, all by itself. The Auris is an uneventful car; stout, stable and solid along with being built in Britain. Quite frankly it is the Mark’s & Spencer boxer short of motoring. Something I could see Sir John Major in (the car, not the boxer shorts that is). 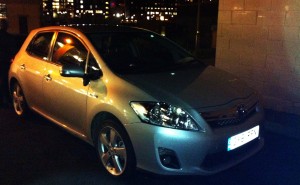 And lo it came to pass that ESM would find itself behind the scarily bright dash of an Auris Hybrid, attempting to reverse away from an apartment building in Gateshead using only the rear view camera. This proved mildly successful until an errant taxi turned up and blocked the road. Regardless, we ploughed on and made it to the road which was when the most startlingly thing of all struck me. We were moving along at an indicated 20mph, but with no noise!

It wasn’t until we reached normal cruising speed that the petrol motor actually bothered to introduce itself. Even then it was hardly intrusive, gently cutting in and out as needed like a silver service waiter. This was all very good, the ride slightly harsh for a family car but not to the levels of Audi optional built-in chiropractor.

Then we braked. At this point I should probably interject that the most heavily over-servoed stopping system I’ve ever encountered was in a Toyota Corolla (another former family company car). It was ridiculous; passengers were at real danger of hitting their heads off the dashboard should an emergency stop ever take place. The Auris Hybrid improves on this with what can only be described as a braking sensation similar to catching your jacket pocket on a door handle; violent, unexpected and ever so slightly embarrassing.

Having recovered my face from the steering wheel, I pressed the tempting POWER button and discovered that the Hybrid did deliver quite a punch. 136BHP aided by the electric motor do make things shift, and my mother reach for the grab handle. But it felt wrong; this is not a car for speed or performance, its mindset is far more one track than that.

Recently I’ve been attempting to drive the Panda 100HP more economically. This was after the slightly worrying realisation that I was only achieving 32MPG. In a Panda. Since that perturbing epiphany, I’ve spent the last week trying to milk every last drop of petroleum from the 100HP’s tiny tank and I have to admit it has worked. The next fill up came and was possibly slightly too happy to see a genuine average of 38.2MPG!

But attaining that increase had tested every single bit of my motoring skill. Shifting up at exactly the right RPM, coasting where possible, carrying enough speed to avoid unnecessary throttle all tired me out both physically and mentally. This is where I can see the advantage of the hybrid electric car. It allows the driver to achieve respectable fuel economy with very little effort. The Auris Hybrid is the lazy route to lower fuel bills and the environmental smugness that comes with it.

And respectable economy is only what the Auris Hybrid achieved on this test. The dash readout gave a figure of 48.8MPG. To put this into context, the Toyota website crows loudly about an official figure of 74.3MPG for the Hybrid. The result is nowhere near. Even my VW Jetta 2.0TDi managed to average 45 miles to the gallon without a fancy electric motor and no real effort from me.

The verdict is simple. If you want to save the world and appease Greenpeace, sell the car and ride a bike, get the bus or take the train. In a world of limited resources a personal car is never going to be sustainable. If you want fuel economy, buy a Bluemotion Golf and drive it like every sip of diesel counts. The result will be the same as the Auris Hybrid but at least it’ll be your own doing. And nor will you have to worry about changing the Hybrid’s batteries as I can guarantee it will not be as cheap or a simple as swapping in the ones from the TV remote. Oh, and you’ll have more boot space than this: 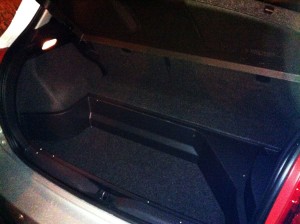 ESM does not like the Toyota Auris Hybrid, and nor should you. Even if you’re a Ninja.