Along with liking NASCAR, Engage Sport Mode is also willing to admit to other things. Like enjoying the music of Avril Lavigne (and seeing her live), thinking additional jalapeno peppers can improve everything and occasionally being wrong.

In this instance, the “being wrong” relates to a prediction made on this very website back in January. In that post I used the words to the effect that you should put “money on a Mk3 Panda victory” in the European Car of The Year awards. So certain was I that, like the previous Panda and numerous other Fiat products before it, that you could almost guarantee another victory for Turin. Rear windscreen sticker manufacturers were already to hit print, advertising executives were primed to see their updated adverts hit the TV, magazines and internets.

And then the Chevrolet Volt/Vauxhall/Opel Ampera went and won. I mean seriously, what the hell?! Without trying to make some battery related pun I’d imagine that I, along with many automotive commentators, were a little shocked by this revelation. Fiat has won the ECoTY prize 9 times since 1964, more than any other manufacturer. Before today, General Motors had notched up only three previous titles (Astra; 1985, Carlton; 1987 and Insignia; 2009). So I’d imagine that in Luton some marketing types, who aren’t in Geneva, were tonight hastily scribbling together some kind of press release. I’d imagine it’s going to look something like this: 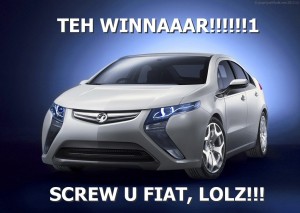 But in all seriousness, the new Panda only came fifth out of the seven nominees. This isn’t a personal issue with me being a Fiat owner, it’s more a general confusion at how the Ampera emerged victorious. Even the Range Rover Evoque placed above the Panda, which really surprised me. The ECoTY judges are meant to assess the contenders on a complicated list of factors such as performance, safety, technical innovation and value for money. In that respect the Volkswagen Up! probably deserved its second place, providing classy, small car-chic in an affordable package; a big deal in these times of austerity. The Panda, on the other hand, perhaps didn’t do much more than build on the already successful packaged which won the prize back in 2004. In that respect it wasn’t really a “game changer” compared to others in the running.

The Ampera victory makes me wonder if, somewhere along the road, the automotive journalists who vote for ECoTY are losing grip with reality. Yes I understand that the Ampera/Volt/whatever has a special drivetrain which makes electric propulsion a reality rather than just a dream. You can plug your Ampera into your house and have it fully ready to go for work in the morning. Should your commute be a little longer that its 35 mile electric range, the internal combustion engine will kick in to top up those batteries. Unless you happen to have a Fisker Karma, this kind of technology is apparently a big deal.

But I can see one slight problem with the Ampera. To keep those batteries topped up and that electric motor turning, you either a) need to plug it into the electricity at your home/a charging station somewhere, or b) fill it up with petrol so the internal combustion engine can produce more electricity. The power to your house is more than likely going to come from a fossil fuel fed power station, and the gasoline is still going to come from refined oil. Either way, your Ampera is still going to be heavily reliant on crushed dinosaur to keep going.

Yes, with its trick powertrain means it uses less compressed stegosaurus bits than many cars, but this doesn’t solve the major problem of reliance on unrenewable energy sources. In addition, much will be made of the Ampera’s impressive fuel economy figures which give (in the Chevrolet Volt at least) an official combined 72mpg (UK imperial) from the US Environmetal Protection Agency. But take a look at what the real world figures are when the Ampera is allowed to use all power “modes” on proper roads. The 49.26mpg (US) obtained by Motor Trend translates into about 59mpg (UK imperial) which is an impressive figure. For comparison, a VW Golf MK6 Bluemotion will, realistically, get fuel economy of around 49mpg (UK).

I realise I’m delving deeply into hypotheticals here, but based on those figures, with a driver covering 12,000 miles a year and using the Ampera in all horsepower producing modes, it’ll take 26 years before the battery-powered car pays off the cost disadvantage against the Golf. For reference, the Vauxhall will cost £28,995 (reduced from £33,995 thanks to a Government grant) compared to £19,445.00 for a Bluemotion 5-door Golf. Yes I realise most trips in the UK are short and the Ampera will be able to use its electric mode, but remember the experience with the Auris Hybrid. £28,995 is a lot of money to sink into something with a Vauxhall badge on the front, let alone something with new technology which may fall to pieces or even catch fire in certain, albeit very rare, circumstances.

I can see why some may see the Ampera as the future of European motoring. If you can afford one, it may well indeed allow you to live the dream of dirt cheap, guilt-free automotive travel. But such luxuries will be out of reach for many in these difficult economic times. Granted, the Ampera’s victory is beneficial in timing for this blog; you’d have almost thought I planned it to fall into American Week! Good thing the Panda didn’t win, I couldn’t really bring back Italian Week again.

All jokes aside, cars like the Ampera are not the solution to our problems. Not at that price and not at that reliance on oil still. At that might well explain why General Motors has decided to suspend production of the Volt for five weeks due to slow sales. On the other hand, Land Rover has already churned out 50,000 Evoques, with orders for another 60,000 already on the books. Given that the Evoque starts at £27,995 I know which I’d be picking given the choice. At least you’d be burning pterodactyl in style…