ESM lives, like rather a lot of people in the UK do, in a city. As such, sensibly (and predictably) ESM drives what is best described as city-car. The end result is making this writer rather well positioned to pass judgement on Volkswagen’s new baby; the up! 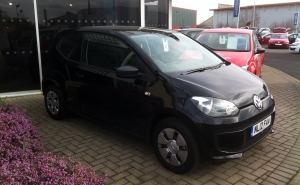 VW’s recent track record with the smallest of automotive contenders has been a mixed bag. The Lupo was well regarded but expensive, with the Fox conversely managing to be cheap but unlikeable. With the up! VW hopes to finally kill both metaphorical birds with one polished jewel of a stone.

Even with the £7,995 priced, entry-level, Take up! I got chance to drive there is a sense that this is not just another cheap commodity item. A new car always looks shiny, even in black, but you get the impression those years of grime and bird-crap won’t stop the up! from looking any less glossy. Standard steel wheels add a sense of utility to the Take up! (factory alloy wheels aren’t even an option on this base model) making kerbs less fearsome.

Overall the up! looks more grown-up and upmarket (sorry, pun not intended) compared to the Citroen C1 or Toyota Aygo. It may not have the chintzy bling of an Aston-Martin Cygnet, but it leaves no doubt that this is solid bit of kit.

Toughness is something reinforced when you get in and close the door. It doesn’t clang like a Panda; it thunks resolutely shut. Yes the Take up! might be the bargain basement model, but looking around the cabin you wouldn’t feel short changed for a fiver under £8,000. The only real criticism I could make is that the gear knob felt plasticky – dog toy-esque – as did the handbrake lever. Higher spec models come with more quality items, along with windows you, thankfully, don’t have to wind yourself. But, compared to cars in its class, or ones from segments above, the up! matches its quality billing with ease.

The dash is dominated by a huge round speedometer – no policeman will ever believe you couldn’t tell how fast you were going – flanked by two smaller gauges for the revcounter and fuel. It’s standard VW fare; simple but effective.

Speeding isn’t actually a far off dream in the Take up! despite only making 59 bhp from its 1.0 three-cylinder motor. Yes, 0-62 mph might seem pained at over 14 seconds, but the reality is it doesn’t feel that slow. Pulling away felt slightly hesitant, but this could be due to a more refined electronic throttle sensor compared to the Panda, rather than actual inherent sluggishness. Performance would be more than enough for everyday real-world use, with the benefits of over 62 mpg (officially at least) and the eager pop and offbeat fizz of the triple cylinders.

On main roads and dual carriageway the up! easily kept pace with the hordes rushing to spend money at the local retail park. The gearshift was light and not once did I attempt to go for sixth gear; a habit I’ve developed from running three six-speeders in a row.

Handling wise, there is a) only so much you can really discover on a short test drive and b) only so much you really need to know about a budget city-car. The steering was light but positive, though I do wonder why a 59 bhp car needs a D-shaped steering wheel. F1 cars, even supercars may need a wheel with a squared-off bottom; the up! does not, beyond pandering to a new automotive trend. Or those who’ve played Mario Kart on a Nintendo Wii perhaps.

Cornering displayed some body-roll, as you would expect from a non-sporting car, but not at levels to cause offence or distress. The up! rode bumps and ruts with relative ease, providing my spine with a much needed break from the concrete springs of the Panda 100HP. No this Take up! isn’t a car to attack Silverstone with, but neither is any £8k new mini-car.

By now you might have noticed that there haven’t been many lolz in this post. The truth is, as much as I wanted to make silly up! related name jokes I couldn’t bring myself to undermine this little car. It is the real deal; much like the Range Rover Evoque I drove last year, the up! feels like driving a car for right here and now.

With petrol at £1.40 a litre, driveways getting smaller and roads getting busier this is all the car you could realistically need in 2012. Downsizing is the new vajazzling, so why skimp on quality when you’re making your motoring more affordable?

Would I buy one? No. At least not in this specification at this price-point. I’ve been far too spoilt with the luxuries of air-conditioning (not even an option on the Take up!), electric windows and Bluetooth phone connectivity. Furthermore, whilst its performance is spritely I would really need more punch. Were Volkswagen to put the GT up! concept into production, then I’d be prepared to sign on the line.

Would I recommend one? Yes. Without any shadow of a doubt. If you want a brand new city-car, there is no other option; it really is that good. The up! deserved to win European Car of The Year far more than the Volt/Ampera ever did. This is realistic motoring for the 21st-century, the fact a waiting list is already building up suggests others agree with that idea.