If you’ve been reading the long running saga about me attempting to buy a new car, you’ll know that I’d swung towards the Audi A1 but was finding it tough to get a dealership to sell me one. The end result was Tyneside Audi providing me with a A1 1.4TSFI Sportback for the weekend, to give me chance to really test the Ingolstadt baby. What did I think? Read on…

Getting stuck in traffic having headed through the Tyne Tunnel is not the best way to prepare for a test-drive. Pulling into Tyneside Audi, I parked next to a handsome looking Glacier White with contrast roof A1 Sportback. A few minutes later, and this turned out to be the car I would be spending the next few days behind the wheel of.

First impressions were good. Being the S line, this model had all the extra niceties such as L.E.D. lighting in the doors and footwells, half leather seats and a very tidy perforated leather steering wheel. Despite costing over £18,000.00, the A1’s interior ambience doesn’t make you feel hard done by. Without wanting to roll out too many clichés, the S line’s insides would not look out-of-place in a car costing 2-3 times as much.

Heading out into the rush hour traffic, the VAG familiarity meant I was able to confidently navigate the back roads from the Silverlink to home. The 1.4 turbocharged engine felt instantly zingy, along with sounding a lot throatier than I expected. In fact my entire weekend highlighted just how vocal the mini-Audi was from its engine bay, and all the better it was for it. Lifting off the throttle at higher revs made the turbo produce a noise that I can only really describe as sounding like a surprised owl. So far, so good!

The other things which stood out were the lightness of the steering, and the lack of feedback through that leather-covered wheel. Given that the S line comes fitted as standard with 17″ x 7.5J alloy wheels, I expected to be able to sense some of their inertia through the steering. But I got none; slightly disconcerting with such big rims fitted to a relatively small car. Others have commented that the ride in the S line borders on the unlivable due to the stiff springs/big rims setup. Realistically, it didn’t strike me as any worse than the Polo I’d just climbed out of. Though perhaps owning a Panda 100HP has made anything above falling down a flight of stairs seem comfortable. Posterior intact, I made it home and took time to admire the high quality Driver’s Information System (DIS) and the worryingly low average 24 mpg showing on it!

To get some second opinions on the A1, I picked up a former Audi owning colleague, Natalie, on my way into work. She immediately loved the looks of the A1, which in daylight appeared quite striking with the Daytona Grey roof contrasting sharply with the white paintwork. Those 17″ wheels and S line bodykit also give the Sportback some chunky aggression; for a little car it packs a lot of road presence and seemed to get admiring glances from other drivers. The morning commute did allow Wallsend’s ubiquitous speed-bumps to expose just how stiff the S line suspension actually is, but the A1’s rorty performance through the Tyne Tunnel toll plaza more than made up for this.

Natalie did also point out that, given the relatively high price of the S line, you would expect to find heated seats and a DAB radio as standard. However, these are relegated to the options list (costing £215 and £305 respectively) even for the top of the range Black Edition.

I decided to move the Sportback in my office car park to the window next to my desk, in order to get the chance to take a better look at it. After less than 24 hours, I’m already starting to become quite taken by the smallest four-ringed offering. It may not be ‘pretty’ in the traditional sense, but it certainly packs a lot of aggression into such a small package. Other colleagues at work seemed taken with the baby-Audi, with one describing it as “the best car I’ve seen you drive since you started here”. Praise enough, I think.

If you speak to ESM’s Other Half, you’ll know that I’m usually banned from having any involvement in the weekly food shopping expedition. This tends to work quite well for me, but on this occasion I know I needed to submit myself to the weekly pilgrimage to Asda. Why? To tick off an important motoring cliché, and bring you this all important photo:

Yes, the A1 Sportback’s boot will take a weekly shop for two people and a whippet! It’s also a chance to show off the rather fancy secondary set of lights the A1 has beneath its tailgate. For use when driving with the boot open after a trip to Ikea is the only reason I can see for their existence, but impressive nevertheless.

No peace for the wicked, or for ESM, as another day at work beckoned. But at least it meant another chance to drive the A1, and the opportunity to play around with the 6.5″ pop-up display mounted on top of the dash. Designed to be used as a sat-nav display, it also incorporates settings for the radio, media-player and other general functions into a ‘lite’ version of the MMI system found on larger Audi models. Once the novelty wore off, I found I could access most options through the DIS screen in between the speedo and rev-counter by using the steering-wheel mounted controls. The large MMI button in the centre of the dashboard also kept fooling people into thinking it was the volume knob for the stereo; it isn’t. That’s the little one to the left. So whilst the 6.5″ screen looks cool, once you’ve used it to play around with settings to get them how you like, you can probably leave it retracted for general use. Until you want to show off to people, that is.

Despite yesterday’s shopping trip, somebody forgot to buy pasta sauce. What should have been a quick 5 minute trip to the shops became a 45 minute expedition in exploring the full dynamic potential of the A1. Freed from the shackles of commuting traffic and a place to be, the S line proved to he hugely entertaining. It feels every bit as quick, if in fact quicker, than the quoted 0-60mph time of 8.9 seconds. The in-gear flexibility, aided by the turbo’s linear power delivery, means the A1 can gain speed without needing to work the weighty six-speed gearbox too much.

However, the steering still remained lacking in feedback about what the front wheel’s were up to. Whilst personally I’ve never really demanded a car to have a particularly talkative steering wheel, with the A1 there was a feeling of being distanced from what was happening at the business end. I suppose this the pay-off for increased refinement and easier low-speed maneuvering.

Like Ben & Jerry’s ice cream, Pringles and heroin, the A1 1.4TFSI proved to be very more-ish. As such, I decided to take the A1 on a tour of some of my old haunts in Newcastle and Gateshead. The underpasses of the Central Motorway also provided a good opportunity to drop the windows and see if the S line sounds as sporty from the outside as it does inside. Pleasingly, it did.

It’s at this point I realise that I cannot genuinely remember the last time I’ve driven a car so much, just for the sheer pleasure of driving. Not since owning the Polo GTi – a car the 1.4TFSI’s performance figures mirror – have I felt the need to be out in the darkness of December, taking photos and blasting between locations with a huge smile on my face.

Would I normally be out in the small hours of a Sunday morning to help ESM’s BTCC Correspondent get his new iPhone 5 to work? Probably not, but it was another chance to drive the A1. With the Apple product sorted, we took the Sportback out on the deserted roads of North Tyneside for a quick blast down to Tynemouth. The verdict from our touring car specialist? “Buy one”. All good advice, providing you overlook how worryingly low the mpg readout was now showing.

After the antics of last night, Sunday proper brought a longer distance trip to test out the A1’s motorway abilities. ESM’s OH and F1 Correspondent whippet were loaded up, and we set off for the middle of nowhere in County Durham, where my parents call home.;

Cruising, aptly, down the A1(M) the Sportback proved more than up to the job of mixing it in the outside lane. ‘Big car feel’ is another one of those infamous clichés, but there really is no better way to describe the long-haul capabilities of the baby-Audi. Despite its supermini proportions, it felt rock solid at speed, with the standard fit daytime running lights and snarling front end seemingly make others willing to get out of its way.

Tyre noise was slightly louder than expected, but this is probably more due to the width of the S line’s wheels (and the state of the UK’s roads) than a lack of actual sound-deadening. Of greater concern was the refusal of the average mpg to lift itself above 35 for the trip. Admittedly this did involve some stop-start traffic (making use of the actual stop-start ignition system) but it was still lower than I would have expected.

The clean country air and piercing winter sun gave the chance to take some photos of the A1 in daylight, which you can see below: 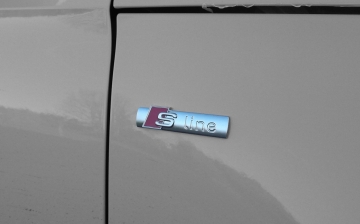 The journey back was smoother, and saw the fuel consumption increase to a heady 38.1mpg by the end. Whilst I’d never expect to get close to the official EU combined figure of over 50mpg, it’s still someway off. Hopefully it’s more a case of this exact car being so new, the very low temperatures working the climate control hard, and the lead foot of yours truly.

Having to hand back the keys of the A1 was genuinely a difficult thing to have to do. Whilst it may be pricey for what is effectively a supermini, it’s very hard not to be taken in by the beauty of the fit and finish. From the steering wheel, to the knurled aluminiumbuttons and leather-covered handbrake and gearknob, everything you touch feels expensive.

But the A1 feels far more than just posh Skoda Fabia or Seat Ibiza. The growling exhaust note, the chirping turbo and shove in the back performance make it a riot to drive. Whilst the steering may lack feel, the solidity of the S line suspension never leaves you lacking confidence in the Audi’s abilities. Its been a while since I’ve driven a little car with such enthusiasm and verve, that I’ve wanted to keep piling on the miles for fun.

Combine this with striking looks, big-car refinement, generous kit levels and everyday practicality and the A1 adds up to far more than the sum of its parts. Quite frankly it’s enough to justify the worries about fuel consumption, and to justify this writer considering spending his own hard-earned cash on one. Recommendations cannot come higher than that.

Want more info about the A1? Try here.

Thank you to Tyneside Audi for kindly lending me the A1, though not for losing my VW key ring from the Polo.