Today marked the start of the North America International Auto Show or in short, the Detroit Motor Show, which is the first major event on the automotive calendar. For many manufacturers it’s the chance to set out their stall for the year ahead, both in the US market and globally. Toyota wasted no time in showing off a completely unexpected new concept, the FT-1.

Toyota faces a problem in that its key product range has become somewhat generic and middle-of-the-road. Apart from the wondrously well received GT86, the current lineup lacks any other really sporting intent. Think back a generation and Toyota’s offerings included the MR2, Celica coupe and the supercar-baiting Supra. Other than the aforementioned GT86, the current range is fairly short on lolz. 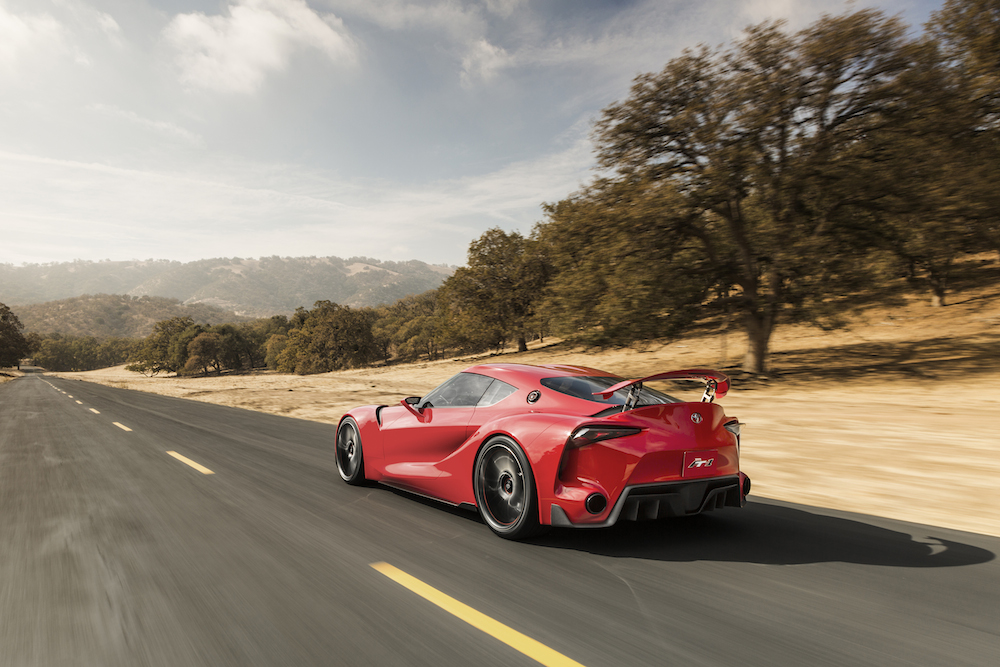 Fortunately, Toyota is seemingly aware of this, and wants the FT-1 to pave the way for cars which will “connect more deeply with customers and generate a more satisfying ownership experience” seemingly by being sportier and more enjoyable to drive.

Styled by Toyota’s Calty design studio in California, the FT-1 (short for Future Toyota one) is intended to be striking modern whilst hinting at the firms back catalogue. The front windscreen and roofline in particular are said to be inspired by the classic 2000GT from the 1960s. In ESM’s option, the FT-1 is certainly striking, though we wouldn’t necessarily call it beautiful; at least not from the front end with that bluff central nose. There’s almost a hind of Formula 1 or Le Mans Prototype which, given that the FT-1 has been designed to be as aerodynamic as possible, cannot be a coincidence.

From the side and rear the FT-1 becomes rather better looking, with influences of SRT Viper, Nissan GT-R and Ferrari all visible if you look closely enough. The retractable rear wing, large diffuser and big exhausts also hint at power which (apparently) comes from internal combustion only; a hybrid this is not. On the inside an F1-style steering wheel and head-up display are said to make the driver “feel at the heart” of the FT-1. Strong stuff.

Will we see a full road version of the FT-1? ESM would be surprised if it came to fruition unchanged from the concept version – we’d reckon on it being a hybrid if produced – but a flagship coupe in some format seems highly likely. Given the Toyota’s history with the Lexus LFA, quite clearly the firm is not against having a hero supercar in its range.

The first taste of the FT-1 will come for those who own Gran Turismo 6 for the PlayStation where it will appear as a new avaliable model tomorrow. ESM will be putting it through it’s digital paces soon!