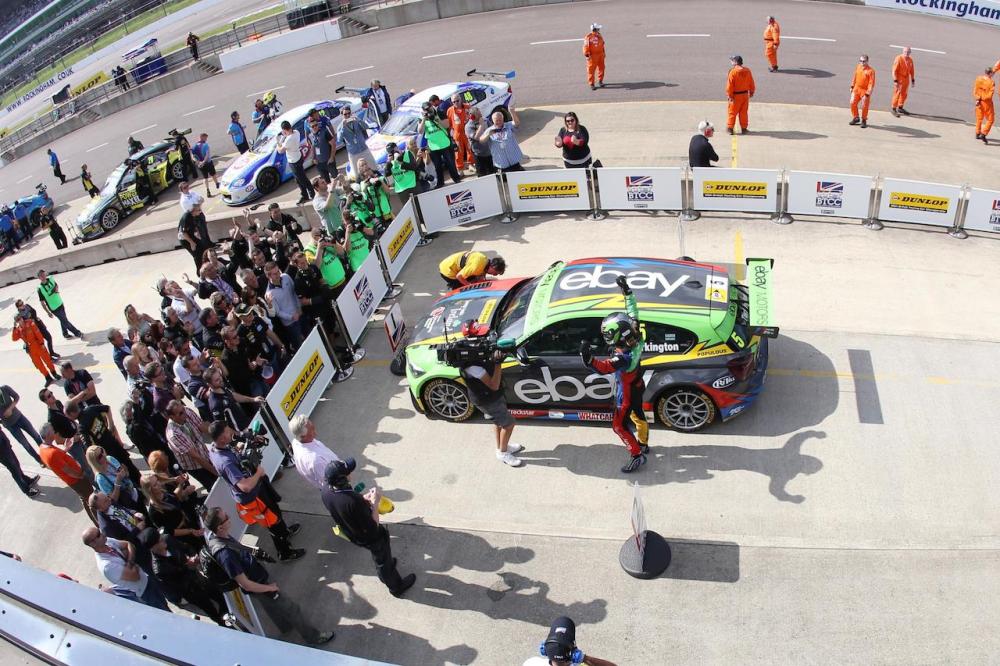 It was another great weekend for the BTCC championship leader, Colin Turkington, in the latest rounds held at Rockingham. Turkington took the chequered flag in the first two races of the day with Rob Austin making a popular climb to the top of the podium for the final race. Turkington’s wins also coincided with a poor weekend for his nearest challenger going into the weekend, Gordon Shedden, so his advantage now stands at 55 points over Jason Plato.

The MG duo of Plato and Sam Tordoff had looked strong all weekend and it was no surprise that Tordoff took his second pole position in a row from Turkington, with full ballast remember, then Plato, Shedden, Andrew Jordan and Adam Morgan.

Race One saw Turkington make a great start when the lights went out and he flew off the line and into the lead with Tordoff and Plato behind him. Matt Neal, having a season to forget, was once again well down the order after the lights went out. Lap 2 saw Tordoff pressurise Turkington, but to no avail, while Morgan made it up to 5th as the queue for the lead increased. A couple of laps later, Morgan and Jordan past Shedden as he went sideways after trying to pass Plato himself. However, one man who didn’t recover from going sideways was Lea Wood as he lost the back end of his Avensis under braking into the Deene Hairpin and his out of control car smacked into the front end of Warren Scott causing a safety car. Both cars suffered substantial damage, Wood’s especially, which was a bit surprising as it didn’t seem to be the worst impact ever seen.

The safety car came in at the end of lap 7 and on lap 8 Alain Menu past both Airwaves Racing Fords as Fabrizio Giovanardi lost control under pressure from Menu and tagged his teammate Mat Jackson, although all were fine to continue. Giovanardi was then able to pass Jackson a couple of laps later as he had a better run onto the start-finish straight or curve as it were at Rockingham.

The next couple of laps brought a bit of action as on lap 12 Turkington started to pull away. Giovanardi was able to pass Marc Hynes and Jackson was close to him too before passing him a lap later. Hynes was then hit by Austin, which sent Neal wide as he avoided Hynes returning to the track and Dave Newsham was able to nip past them both.

Towards the end of the race, Menu was able to make up a couple more positions to finish 4th – his best finish since returning to the BTCC. There was also a great battle further down the field as there was a 4-way battle for 10th between Jack Goff, Rob Collard, Austin and Tom Ingram. The cars raced very well in close vicinity of each other with 10th finally going to Goff. However, at the front this was Turkington’s race once again and he took the win from Tordoff, Plato, Menu, Morgan and Jordan with Shedden down in 8th, his second lowest finish of the season. 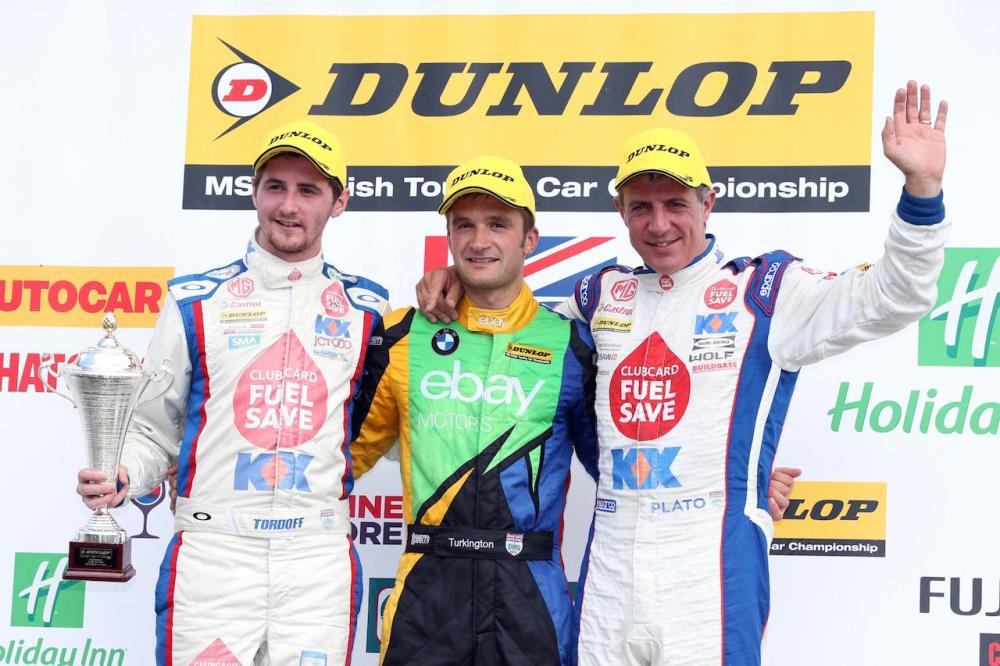 Race Two saw Turkington get away well once again from Plato, but Menu made it up to 3rd while Jordan went well down the order as mayhem ensued. Morgan was doing well before it went wrong, Shedden went off the track, Jordan slid wide and there was a crash off the start line involving Chris Stockton. I still don’t think that covers it all, but you get the idea, madness everywhere!

Lap 3 saw Giovanardi and Jackson make contact again with Collard lurking in the background, but in the end it was Giovanardi who lost out going down to 6th with Jackson 5th and Austin was also going well in 7th. However, a few laps later, Jordan was able to get ahead of Austin and Jordan was trying to make it 6th by challenging Giovanardi and he achieved his goal after a lap. One man out of the race was Morgan who pulled off the track with some sort of difficulty. However, Jordan continued his charge through the field and on lap 9 he went cleanly up the inside of Jackson at the Tarzan Hairpin for 5th.

Lap 11 saw a big gap between each of the leading trio, while Jordan made it 4th with a pass on Menu. On laps 13 and 14, Giovanardi and Collard were still racing hard and rubbing bodywork, with Collard eventually coming out on top. The last lap saw Tordoff all over Plato after he’d been catching him for a few laps with Jordan close behind him too, but they held position unlike Menu who was overtaken by Austin. Turkington came home first to take his 8th win of the season with Plato in 2nd, Tordoff in 3rd, Jordan 4th, Austin 5th and Menu 6th.

Race Three was hardly a classic to be fair. Menu was drawn on pole so he lined up on the grid with a clear view ahead of him with Austin, Jordan, Tordoff, Plato and Turkington behind. Austin fired himself into the lead as the lights went out and there was also a good start for Turkington as he moved up to 4th with another good start from the BMW. Jackson was able to get past the MG pair of Plato and Tordoff who were later split on the lap by Collard, but there was contact between Hynes, Hunter Abbott and arguably more importantly, Shedden. The Scotsman was able to make it back to the pits, but the damage was irreparable and he was out for his first retirement of the season.

By lap 4 it was clear that Jordan was holding up the quicker car of Turkington who had Jackson close behind him and Jordan was defending defiantly. This was the scenario for the whole race with the odd challenge here and there.

Lap 9 saw Neal overtake Aron Smith for 11th. By including this piece of information, you can tell it really wasn’t a classic BTCC race after the first lap. Other moments worthy of noting include Giovanardi and Tordoff battling, with Tordoff finally coming out on top, Collard getting ahead of Plato at the Deene Hairpin and Goff leaving the track on the last lap of the race.

However, at the front, Austin had driven the perfect race to come home first to win at Rockingham for the second year running. Menu beat his previous best finish since returning to the BTCC, set in Race One, by coming home in 2nd with Jordan making a return to the podium for the first time in 9 races ahead of Turkington, Jackson and Collard.

Turkington couldn’t have hoped for a better weekend as Shedden suffered his worst weekend of the season and although Plato had a good weekend with a 3rd, 2nd and a 7th, it was no match for the Ulsterman’s two victories and a 4th. Turkington now has a 55 point lead and although anything can happen in the BTCC, it would take some extraordinary events for him not to win from the position he’s now in, despite Plato battling on to the end.

Championship Standings after Round 24 of 30:

Jack Sears Trophy – Given to the driver who gains the most places over the season.

Pirtek Racing – Honda Civic
A good weekend for Jordan after some difficult recent rounds. Depper was in the low points in the second race.

Honda Yuasa Racing – Honda Civic Tourer
Shedden had his worst weekend of the season with two 8th place finishes and a retirement. It’ll be difficult for him to win the championship from the position he’s in now. Neal continued his poor season down the order.

MG KX Clubcard Fuel Save / Triple Eight Engineering – MG6 GT
A very good weekend for the MGs with two 2-3 finishes and a 7-8. Good to see them back competing properly to be honest.

eBay Motors – BMW 125i M Sport
As we’ve come to expect, Turkington was once again the team’s star performer with Collard having a reasonable weekend, but Foster had a nightmare with a second race retirement and he couldn’t start the last race.

Airwaves Racing / Motorbase – Ford Focus ST MKIII
Both cars finished with reasonable points in each race although manager Dave Bartrum won’t have been too happy with the contact Jackson and Giovanardi were making with each other!

Crabbie’s Racing / Motorbase – Ford Focus ST MKIII
Last time out he had 2 points finishes in a weekend for the first time and he repeated the feat this time.

CHROME Edition Restart Racing – Volkswagen CC
Super weekend for Menu and his best since his return at the start of the season without any doubt. Aron Smith was anonymous, Goff scored a couple of points and Warren Scott was troubled by his contact with Wood resulting in a DNF, DNS and then another retirement.

STP Racing with Sopp & Sopp – Proton Persona
Better than Knockhill for the team as both cars finished all races, but no points.

Laser Tools Racing / RML – Chevrolet Cruze
Not a great weekend for Moffat with a 23rd and two retirements.

United Autosports – Toyota Avensis
Lots of retirements for the team this weekend with no points either.

Power Maxed Racing – Chevrolet Cruze
At least we’ve seen Chris Stockton in some action now after his crash after the start of Race Two. Probably denied Turkington pole position in qualifying, due to his blocking, too.

WIX Racing – Mercedes-Benz A-Class
Morgan will be disappointed with his weekend after retiring twice following a strong 5th place in the opening race.

Houseman Racing – Toyota Avensis
Lea Wood’s going to have a big repair bill after having his back doors smashed in following contact with Scott. It’s been a long time since I’ve seen a back of a car so destroyed up from what didn’t look like that bad an impact.

AlcoSense Breathalysers Racing / Rob Austin Racing – Audi A4
A great weekend for Hunter Abbott in the Jack Sears Trophy as he’s now up to 2nd and he had good results with a 14th and a 10th before retiring.

Exocet Racing / Rob Austin Racing – Audi A4
‘‘Can he win again at Rockingham like last year?’’ I asked after Knockhill. Well yes, yes he can. Well done Rob, well deserved and another good weekend.

Speedworks Motorsport – Toyota Avensis
A couple of low points finishes and a retirement for Ingram this time out.

Next up: Silverstone, 28th September.