Still needing a small performance wagon, but not taken with the VW Golf R Estate from last week? In something that seems to be the beginning of a trend, here’s Mercedes-Benz with their CLA 45 AMG Shooting Brake to give you yet another option.

Launched alongside regular versions of the new CLA Shooting Brake, this becomes the third spinoff from the A 45 AMG hot hatch. Using the same 2.0 litre turbocharged four-cylinder petrol engine, the CLA 45 AMG Shooting Brake retains the 355 bhp and 332 lb-ft of torque as the rest of its brethren. Mercedes likes to point out that this is the most powerful four-cylinder engine in series production at the minute, and that the unit also shares technology with the 4.0 biturbo V8 found in the Mercedes-AMG GT sportscar.

But what does that engine mean for a small estate in terms of performance? Try 0-62 mph in 4.7 seconds, and an electronically limited top speed of 155 mph. That’s quicker than the Golf R but then it should be, given the almost 60 bhp extra it’s packing under the bonnet. It also features an official fuel economy almost equal to the Golf, recording 40.1 mpg on the combined cycle. A sports exhaust with automatic flaps – yes, really – lets you decide between quiet cruiser or raucous racer as the mood takes you.

Power is fed through a standard 7-speed AMG SPEEDSHIFT dual-clutch gearbox to all four wheels, with the 4MATIC system able to split torque 50:50 between the front and rear axles. In normal driving it defaults to front wheel drive, sending torque to the back end when needed. The gearbox comes with the usual Mercedes sport, manual and eco modes, whilst the ESP stability system also includes a sport setting for some safe fun. Sports suspension, a high performance braking system with vented and cross-drilled discs, and speed sensitive steering complete the AMG hardware crammed into the Shooting Brake’s compact body. 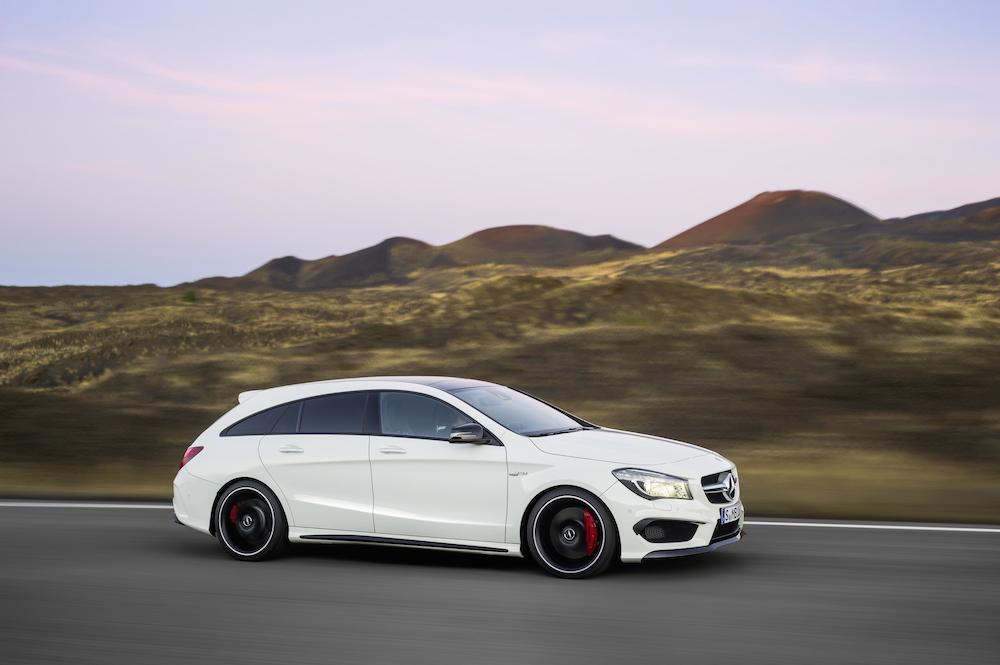 In fact, an estate agent (sorry for the pun) might describe it as being bijoux in terms of its load carrying ability. With the seats folded flat, the Shooting Brake can pack a total of only 1,354 litres into its svelte shape. That puts it more in the stylish lifestyle load-lugger category, like the old Alfa Romeo 159, rather than being a true practical vehicle. That luggage space is actually only 200 litres more than the A 45 AMG hatchback, and puts the Shooting Brake some way behind the 1,600 litres of the Golf R Estate.

However, we can presume that most people will be buying the Shooting Brake for the combination of looks and some practicality, rather than as a tool for transporting antique wardrobes or grandfather clocks around the country. Looking like a scaled down version of the CLS Shooting Brake will do the CLA no harm, and the AMG additions only emphasise the good looks. Along with the large air intakes on the front bumper, prominent black splitter, special side sills and 18″ alloy wheels, there’s also a roof spoiler that includes an actual Gurney flap to reduce lift at high-speed. As is the custom for any modern four-cylinder performance car, the Shooting Brake also features quad exhaust tailpipes set into a black rear diffuser.

Inside is the regular blend of AMG sports seats in a leather / microfibre combination with red stitching, complemented with a flat bottomed steering wheel, aluminium trim and bright red seat belts. Mercedes is also offering an “OrangeArt Edition” which seems to include random bits of orange trim applied throughout the cabin and the on the exterior. It’s almost like the motoring version of this website.

There won’t be a full official launch until the Geneva Motor Show in March next year, with sales set to start at the same time. No prices have been announced as of yet, but somewhere in the region of £43,000 would seem right given the price of the CLA coupé.

Place your bets on which manufacturer will be announcing a compact hot estate next week. We’re still sticking with the Honda Civic Tourer Type R as out suggestion.