Writing recently about the handsome new SEAT Leon ST, and the grunty Focus ST Mountune, has got EngageSportMode thinking about its preferred choice of estate car. There’s something about a sporting station wagon which often makes it more appealing than its saloon brethren. Perhaps it’s the fact it can combine performance and practicality, or maybe it’s the frequently more pleasing shape of a hatchback compared to a boot. Whatever the reason, here are our favourite five estate cars.

It would almost be impossible to put together a list like this without reference to one of Ingolstadt’s finest load-luggers. Since the RS 2 of 1994, co-developed with Porsche, Audi has been churning out fast, effective, estate cars based on the compact A4 model.The latest RS 4 uses the rev-happy 4.2 litre V8 engine, as also used in the RS 5 model, mated to a seven-speed DSG gearbox. Its 443 bhp, developed at a heady 8,250 rpm, is fed to the road through the trademark quattro all-wheel-drive system, keeping with the tradition set by the RS 4’s predecessors.

Whilst some critics have bemoaned the relative lack of torque, only 317 lb-ft, prodigious grip from the AWD system allows it to fire itself to 60 mph in 4.5 seconds, onwards to a limited 155 mph. Whilst it also might not be the last word in ultimate driver-vehicle-road communication, you can’t fault it’s purposeful looks and refined build quality. Oh, and the fact it has 1,430 litres of boot space with the seats down.

That prices start at only £55,525 presents it as something of a bargain in the modern world of the £30k VW Golf GTI. Providing you could handle the rev happy nature, and 26.4 mpg average fuel economy, it really could be all the car you ever need.

Hands up if you’ve ever seen a Fabia vRS Estate on the roads? Probably not we would assume. At the other end of the VAG performance wagon spectrum is this relatively rare Skoda wagon, but one that still packs a substantial performance and practicality combo.

Power comes courtesy of the VW Group 1.4 TSI unit that adds both a turbocharger and a supercharger to the four-cylinder engine. Shared with the VW Polo GTI and SEAT Ibiza Cupra, the little TSI motor gives 178 bhp and a useful 184 lb-ft of torque from as little as 2,000 rpm. Like its big cousin the RS 4, it also leaves the factory fitted with a seven-speed DSG dual-clutch ‘box as standard.

Although 0-60 in around 7 seconds and a 140 mph (1 mph more than the Fabia hatch) may pale beside the Audi, it’s worth remembering that the Fabia vRS costs just £18,000. Plus, vRS Estate owners can laud it up about their 1,460 litres of cargo room being 30 more than the RS 4. Debadged, and in the right colour combinations, the Fabia vRS Estate could be a real ‘Q-car’ with its understated looks and effective pace. However, EngageSportMode would more probably choose one in Sprint Yellow with the 17″ Gigaro wheels in black – just like this one here.

In a break from the ruthless efficiency of the VAG empire, here’s an Italian estate which you can’t actually even buy any more. So why is it here? Well, just look at it! Tell me you can think of a more beautiful wagon, other than ones which probably exist only in the Sultan of Brunei’s garage. 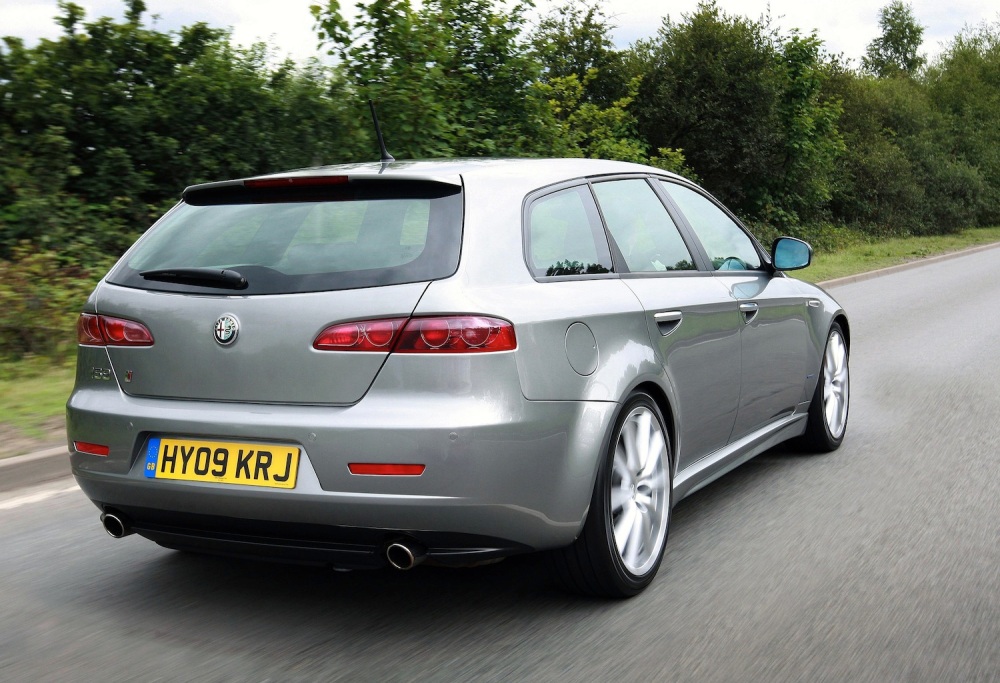 It’s pretty good from the rear too – the estate shape emphasising the flared wheel arches and swage line which runs all the way to the tail lights. Whichever way you look at it the 159 Sportwagon, styled by Giorgetto Giugiaro, is a genuinely beautiful car. Inside you’re treated to leather, aluminium, neatly recessed dials and a tidy 3-spoke steering wheel. 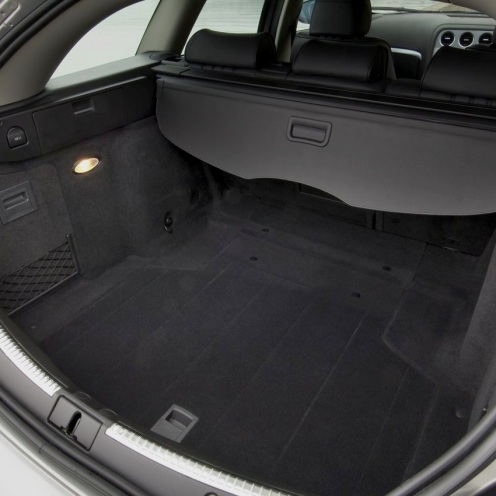 However, the 159 Sportwagon is not without its flaws. Designed during the troubled Fiat-General Motors joint venture, the 159 rode on the GM/Fiat Premium Platform which also underpinned the Brera and Spider models. The platform was not well-regarded, mainly due to the fact it suffered from a bit of a weight problem – at 1.7 tonnes the 159 is hardly a featherweight. It’s also perhaps best that we don’t mention the boot is more lifestyle than practical, offering only 1,200 litres of room for your designer Italian leather luggage.

Despite the above, it’s still hard not to be taken in by the 159 Sportwagon’s aesthetics. You could even have a four-wheel drive version fitted with a GM, sadly not Alfa, derived 3.2 litre V6 engine. That one served up 256 bhp and 237 lb-ft, though the hefty weight of the 159 meant only a mediocre 7.2 seconds 0-60 mph time. It was also 1 mph short of the magic 150 in terms of top speed.

Auto Trader currently lists just 68 159 Sportwagons for sale, and only one of those is the elusive 3.2 litre V6 Q4 model. You’ll have to really want one to take the plunge, but just look at the photos and try not to be seduced. I dare you.

Ok, let’s get it out of the way. We all know that it’s not really a Vauxhall. It is, of course, a rebadged product from General Motors Australian division; Holden. More particularly it’s built by Holden Special Vehicles, a company which began life homologating racing cars for use in Australian touring car championships by building road versions in the late 1980s.

The VXR8 Tourer is known as the HSV Clubsport back in Oz, and utilises the Holden Commodore VE chassis as its backbone. This is important, as it means the VXR8 Tourer uses the simple concept of a huge V8 engine and rear wheel drive setup to devastating and dramatic effect. Power comes courtesy of a General Motors LS3 6.2 litre V8, one which saw service in the previous generation Chevrolet Corvette. With 425 bhp and 405 lb-ft of torque it’s a no-nonsense machine. A six-speed manual gearbox (an automatic ‘box is optional) feeds power to the back wheels through a standard limited-slip differential. This equates to the lairy tail-slides even Vauxhall’s press pictures show the VXR8 making.

Don’t go expecting Audi levels of refinement and you won’t be disappointed.

Plenty of room for dingos, kangaroos and other stereotypical creatures.

On road performance, when you get it in a straight line, results in 155 mph flat-out with a 0-60 mph sprint in 4.9 seconds. Official combined fuel consumption of just 20.9 mpg is probably best ignored, however. Although you can, at least, reason the VXR8 Tourer as a practical car – it’s 2,000 litres of boot space with the seats folded shames every estate else on this list, and currently on sale in the UK. Whether that justifies the £49,500 price depends on just how much space you need, and just what lengths you’re willing to go to in order to avoid a German performance wagon.

Out on the wide open roads of Down Under this car makes sense. In the UK the VXR8 Tourer is a deeply silly car, but that just makes EngageSportMode love it even more.

If you’re a regular reader you’ll know EngageSportMode is already a fan of the previous generation BMW M5 and its F1-inspired V10 engine. The Touring took that intense, rev-hungry, motor and snappy SMG sequential gearbox package and added extra practicality in the form of a capacious boot.

An extra 100 kg of weight was added to the M5 by virtue of the increased rear metalwork, strengthened rear suspension and rerouted exhaust system. However, with the M5 Touring’s 500 bhp and 383 lb-ft of torque this meant the 0-62 mph time increased by only 0.1 of a second compared to the saloon’s 4.7 seconds. Top speed remained at an officially limited 155 mph, but it was widely acknowledged that, unrestricted, the M5 would run all the way to beyond 200 mph.

Not many supercars have this load space.

Looking at the E60 M5 now, especially in Touring form, the car appears almost understated given the crushing performance which lurks beneath the Chris Bangle designed bodywork. With 1,650 litres of folded flat boot space, the M5 was a truly practical estate, that just happened to have the speed to challenge contemporary Ferrari and Porsche models on the Autobahn.

It did retain the frustrations of the saloon, such as the hard work needed to keep the V10 in its optimum power band, along with the unnecessary options created by the iDrive system for gearbox and steering settings. It was expensive too, with prices starting from £67,075 when new back in 2007, and the official fuel consumption languished at a hopeless combined 19.7 mpg. These factors, along with its limited time on sale, might explain why BMW sold only 1,025 Touring models, compared to 19,564 saloons.

Whilst not perfect, the E60 M5 Touring sums up everything a fast estate should be – ludicrously quick, subtly styled, and hugely practical as a load-lugger. Today, should you want one, used prices start from just over £20,000 and rise to around £30,000 for later model, BMW approved examples. Not bad for something which will surely become a future classic. Still want that Golf GTI?

Whatever your poison, or budget, there’s a fast estate car to suit. Just remember, you can always justify it to yourself – or anyone else – as a practical purchase.