Audi teased us about a potential new RS 3 model earlier in the year with the A3 Clubsport quattro concept. Fast-forward a few months and the real thing is here, albeit in five-door Sportback only form. So, what are the details of the new very hot-hatchback?

Let’s get the headline chasing figures out of the way first. This is still technically a hot-hatchback, but one with the potential to do 0-62 mph in 4.3 seconds, and a potential top speed of 174 mph – should you tick the right options box. That’s right, a family hatch’ that could outrun a number of sports cars and super saloons – especially those pegged by 155 mph limiters.

Most significant is the fact the RS 3 retains the wonderful 2.5 litre five-cylinder engine from its predecessor, rather than stick to the current trend of downsizing. Audi has heavily reworked this classic power unit to increase power output to 362 bhp (367 PS), along with 343 lb-ft of torque – increases of 27 bhp and 11 lb-ft over the original RS 3. Naturally, fuel economy and C02 emissions have also improved, but with an official combined 34 mpg it’s still hardly an eco-car! 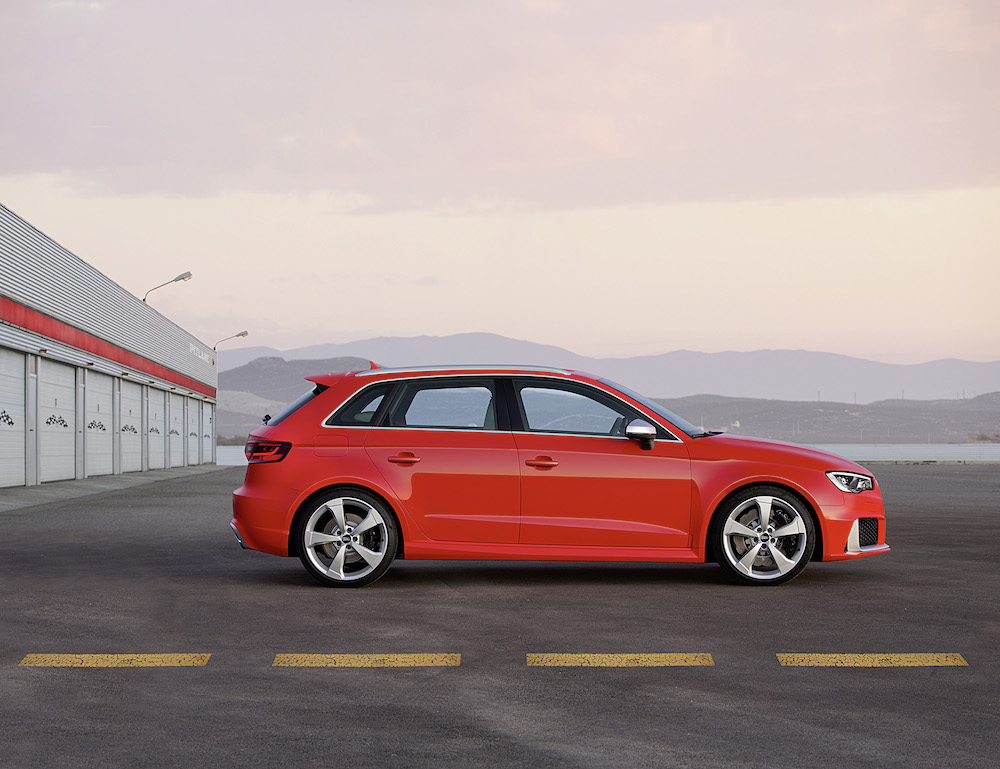 Audi has gone to lengths to ensure the unique and iconic offbeat sound from the five-cylinder engine enters the cabin of the RS 3, with exhaust flaps to provide an ‘intensive sound experience’ depending on engine load and speed. The flaps can also be controlled by the driver, probably to allow the option to not annoy your neighbours every time you leave home. However, an optional sports exhaust system exists should you want to turn things up to 11 and not care what anyone else thinks! If you need to know what’s so special about the sound, try this for a starter. We’re also rather shocked the RS 3 only has two exhaust tailpipes – not four, like virtually every other performance car that we’ve seen this year!

Quattro all-wheel-drive is, of course, standard with the RS 3 able to send up to 100% torque to the rear axle should it require it. Choosing ‘dynamic mode’ on the Audi Drive Select system even allows for ‘controlled drifts on low-friction surfaces’ according to the press release. That sounds an awful lot like Audi positively encouraging tail-out cornering action! A seven-speed S tronic dual-clutch gearbox has been reworked to give even faster shift times; no doubt contributing to that 0-62 mph time that’s 0.3 seconds quicker than the previous RS 3.

Similar to the S1 we tested earlier in the year; adaptive suspension dampers provide a variety of settings, with the whole car sitting 25 mm closer to the ground compared to the regular A3. The RS 3’s steering features a progressive system, capable of varying the ratio dependent on speed – something that hasn’t always been regarded as conducive to excellent feel and feedback. We’ll hope the engineers in Ingolstadt have managed to tune it well, to avoid that tag of being another quick but uncommunicative Audi.

Braking is handled by 370 mm discs at the front with eight (yes, eight) piston calipers painted black, whilst 310 mm discs slow the rear. Optional are carbon-ceramic discs for the front, an apparent first for the hot-hatch market. Top tip; you’ll be able to spot those who have opted for the ‘special’ brakes by the anthracite-grey brake calipers. 19″ wheels feature as standard and, thankfully, are more subtle than those worn by the last generation car.

Also different to the previous RS 3 is the loss of 55 kg in weight, although the new car still tips the scales at 1,520 kg so can hardly be described as a featherweight. More obvious changes can be seen in the new front bumper, featuring the distinctive aluminium look ‘blade’ which acts as a splitter and then kicks up into the air intakes – something first seen on that Clubsport quattro concept. The quattro logo in the trapezoidal grille is also prominent, as is the extensive use of honeycomb mesh! The distinctive paintwork featured in these photos is a new colour known as Catalunya Red; an exclusive for the RS 3.

Slightly subtler are the widened wheel arches and reshaped side sills, with aluminium look roof rails almost allowing the RS 3 to pass itself off as a respectable load lugger. At the rear, a deeper roof spoiler and a prominent diffuser with those two large oval exhausts are the only real clues as to the performance potential. All the aluminium trim seen in these photos can be swapped for gloss black instead, offering the ability to make the RS 3 into a real stealth machine. Should you so wish, you can also opt for a carbon-fibre engine cover; like those available for the R8. 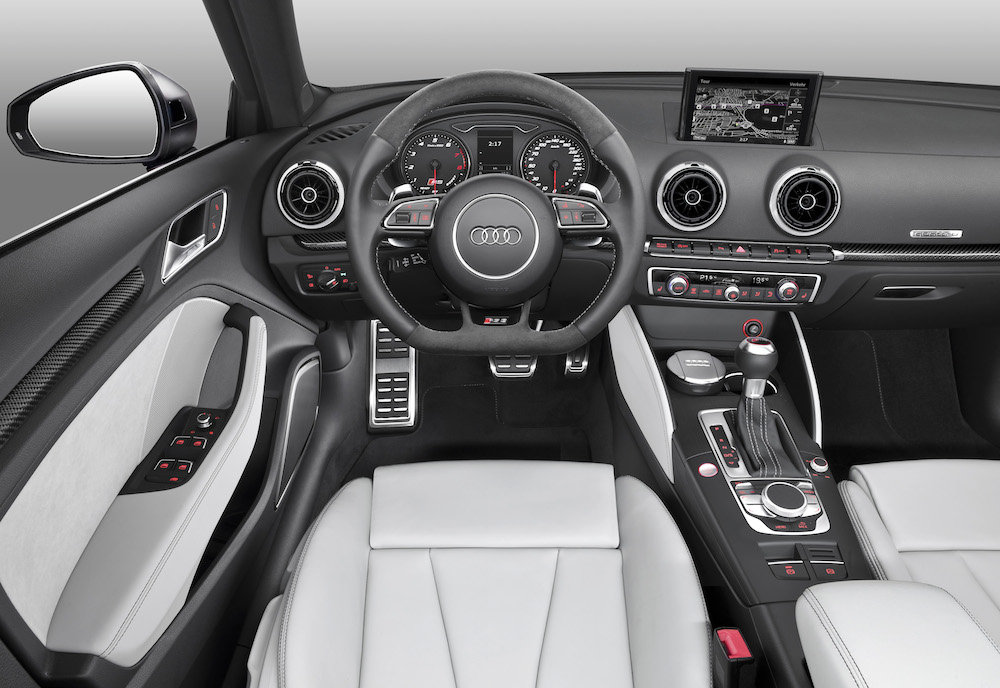 Carbon fibre options are also present in the cabin, with new RS bucket seats available with carbon shells. These alone weigh 7 kgs less than the standard sport seats; a must have if your dedicated to saving weight where possible. The steering wheels features both leather and Alcantara sections, with more Alcantara found on the door inserts. Gloss black surrounds the black dials with red needles, with a Driver Information System capable of displaying oil temperature, boost pressure and lap times in between. 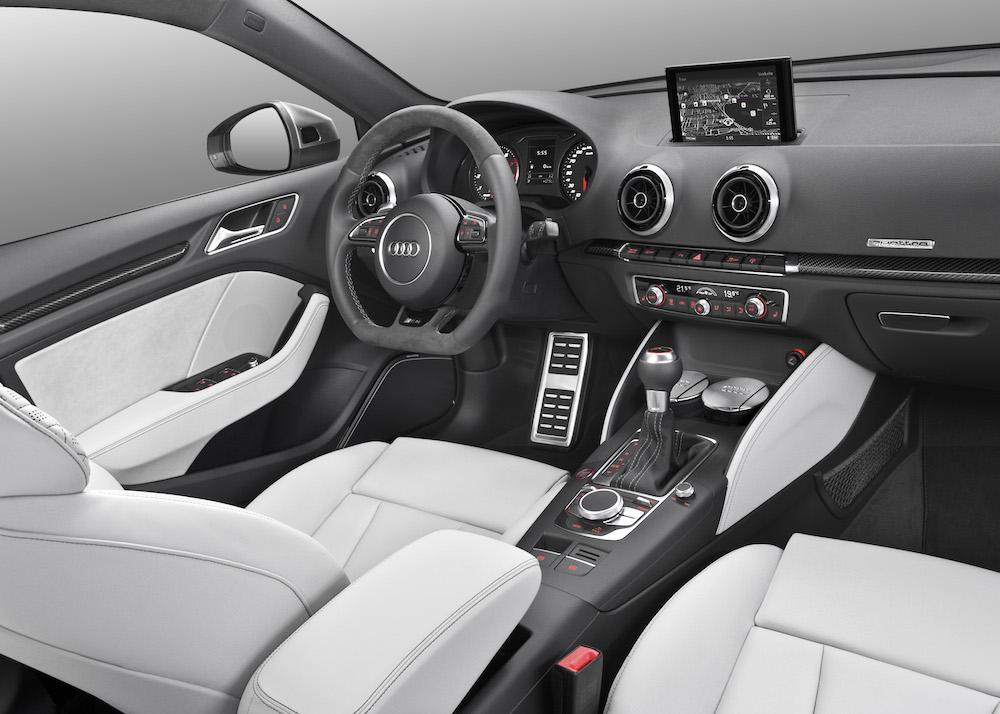 Compared to the last RS 3, this version has appeared much earlier in the current A3’s model cycle – two years versus the old car’s eight years – suggesting Audi may well tweak the performance over time to match rivals. The biggest challenge for the new RS 3 will be whether it can shake off its predecessor’s image of being quick but soulless; fingers crossed it can.

Due to go on sale in March 2015, first UK deliveries are expected by the Summer. Prices haven’t been confirmed yet, but we would imagine to be in the same ballpark as the £40,000 cost of the previous generation car.