Turning an immensely popular global television success story into an arena show – how hard can it be? The short answer is not particularly difficult. The longer answer is whether or not such relative ease truly adds anything to the Top Gear brand, other than around 90 minutes of fireworks, flames and digs at the Argentinians.

It’s hard to know how to describe Top Gear Live succinctly. A ‘car circus’ is perhaps the most appropriate analogy: an over-the-top ringmaster compéring proceedings in Clarkson, a troupe of clown sidekicks in Hammond and May, death-defying stunts and dramatic explosions. It’s also much like a circus in you know Hammond will have his teeth made fun of, that James May will be called slow, and that Clarkson will make comments about the Daily Mail. Much the same way you know the circus lion won’t eat the lion tamer, and that the trapeze artists will always catch each other – there’s no hidden surprises here.

The show can be split into two distinct categories – the bits which involve Clarkson, Hammond and May ‘cocking about’ and the bits which are a strange, but mesmerising, form of automotive interpretative dance. The former consists of staple TG challenges such as drifting, racing Reliant Robins, and car football. On the other hand, the latter includes precision stunt driving, French motorcyclists inside a globe of death, and hauntingly strange sight of a woman with flamethrower arms, setting Porsche 911s on fire as they slide around. That last one looks just as surreal as it sounds. 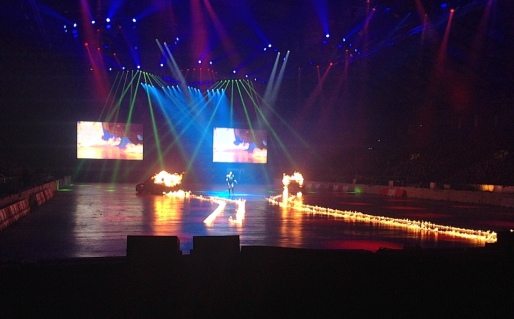 Porsche 911 laying down tracks of flames, and looking to be alight.

There are actual performance cars in Top Gear Live though. The ‘supercar parade’ includes a long list of wonderful exotics, ranging from a Morgan Plus 8, to BMW M6 Gran Coupé, Ferrari 458 Italia and Lamborghini Aventador. It’s like a short moving motor show, just without the chance to get up close and actually see the cars. Or see half of them, depending on where you sit.

More cars added into the mix

The end result – a substantial value of exotic cars.

Your seat is relevant to your wallet too, as Top Gear Live isn’t particularly cheap for the best view. The most basic tickets start at £35, rising all the way to £95 and more for seats in the first three rows of the arena. With a capacity of around 4,000 seats, and five shows over three days, Top Gear Live will have taken at least £700,000+ in ticket sales, based on just the cheapest ticket price alone. Add in the extra money from those who don’t want to be sitting at the back, and you get an awful lot of money stacking up. 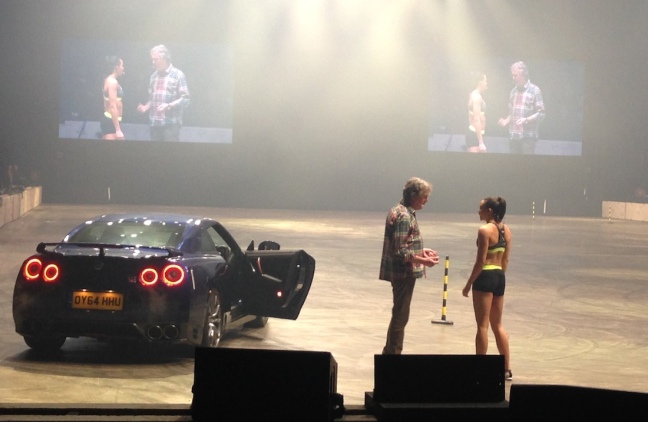 James May prepares to race, and lose to, Olympic athlete Louise Hazel, using a Nissan GT-R

Reliant Robin racing. Yes, they end up on their sides.

The infamous Globe of Death – home to 7 Frenchmen.

If you’re a fan of the TV show, Top Gear Live will please you immensely. There’s silliness, ‘classic’ Top Gear humour, and features you’ve seen on the BBC (and probably a million other times repeated on Dave) before. There’s nothing fundamentally wrong with that, but if you go expecting to be wowed and amazed by new ideas, you’ll be left disappointed. Much like expecting Top Gear to be a TV show about cars, rather than just entertainment, perhaps.

Does Top Gear Live add anything new to the brand? No, of course not. This is Clarkson et al. giving their core audience exactly what they want, within the confines of a live-action arena. If you’re already a devotee to the cult of Top Gear, you’ll love the live show. If, however, you bristle for the days TG was a ‘real’ motoring programme, are Argentinian, read the Daily Mail, or just dislike Jezza, Top Gear Live will do nothing to change your opinion.