We’ve made it to the final part of our epic journey through the dozen cars we experienced at the SMMT Test Day. Don’t forget to read part one and part two first!

Eight cars down, we were now into the home stretch of the 2015 SMMT Test Day. Two of the final quartet were rather familiar, and another two were new ones ticked off the list. But which was best?

If you’ve been following us on social media or checked out our post over on Motoring Research, you’ll know that ESM recently acquired a new VW Polo GTI. So why did we drive a car that we’d already driven several hundred miles the day before just to get to Millbrook? For comparison, of course! Also, we weren’t allowed to take the ESM Polo on the test-track. Plus the VW Press car was white, compared to red one which lives on the ESM driveway, and it had manual air-conditioning instead of full climate control. It also rattled less from the door cards, but the less said about that the better, for now. For the record, sport mode was engaged all the times!

Having driven the Corsa VXR and MINI Cooper JCW earlier in the day, the Polo GTI was an interesting contrast. Although it lacked the outright aggressiveness of the Corsa, the Polo bettered it on refinement and interior quality. It also trumped the MINI for not having a frustrating automatic gearbox, but just a simple six-speed manual instead. Oh, and tartan seats win every time. 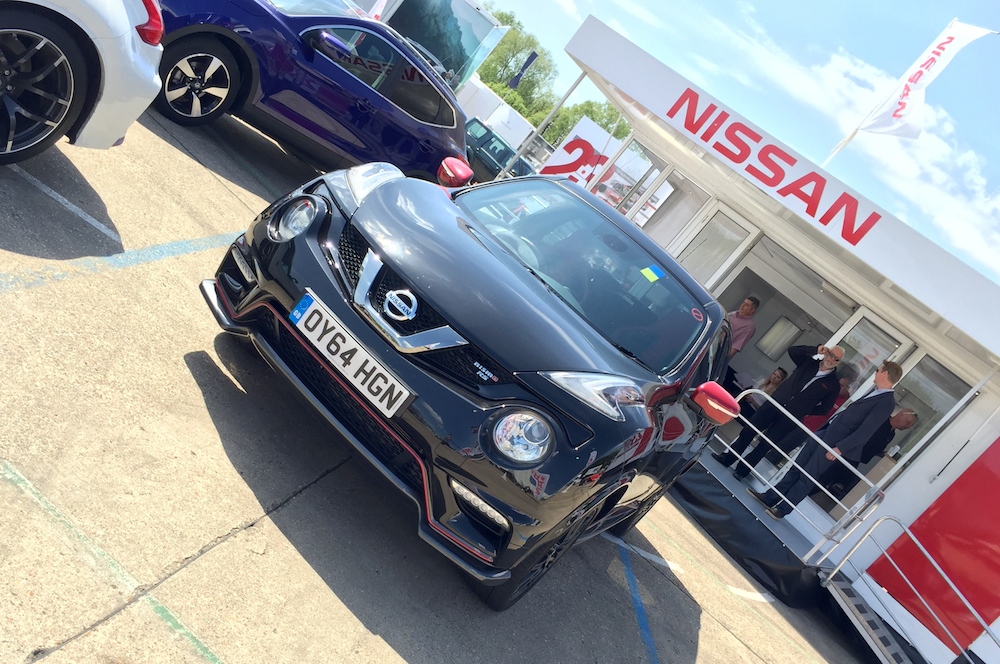 This was unexpected. Less than two years ago we drove the Juke NISMO in pre-RS guise at the GoMW Big Day Out. We liked it so much that we made it our favourite sport crossover in the 2013 ESM awards – that is how much we enjoyed it. In fact this car was one we were really keen to try, but when it came to actually driving the NISMO RS at Millbrook, we were left sorely disappointed.

It was the only car which we were yellow-flagged by a marshall for ‘trying a bit too hard’ during the entire day, which is even more perplexing. Maybe it was the exaggerated roll from the crossover body making things look more dramatic than the actually were? Despite this manual gearbox car having a proper limited slip differential, it seemed to do very little in controlling the power going through the front wheels. In uphill corners, where other cars had coped admirably, the NISMO RS frustratingly just wanted to spin all the power away.

Add to this power steering which felt springy and over assisted, and it’s hard to find any real positives about the RS. Optional Recaro seats helped lift the interior, and the Alcantara-clad steering wheel remains a nice touch, but against new competitors the insides are now starting to show their age. What was once an interesting curio has, sadly, turned into a rather underwhelming oddity at almost £22k. Role on the Pulsar NISMO…
ESM Rating 4.0/10
Stats: £21,995, 1.6-litre I4 turbo, 215bhp/206lb-ft torque, 0-62mph 7.0 secs, 137mph top speed.

From the somewhat ridiculous, to ever so slightly more sublime. Although not fitted with the full ‘Sub 8’ pack, this is the basic car that set the fastest ever estate car lap time around the Nordschleife-Nurburgring last month. It was also covered in orange detailing, which made ESM instantly fall in love with it. 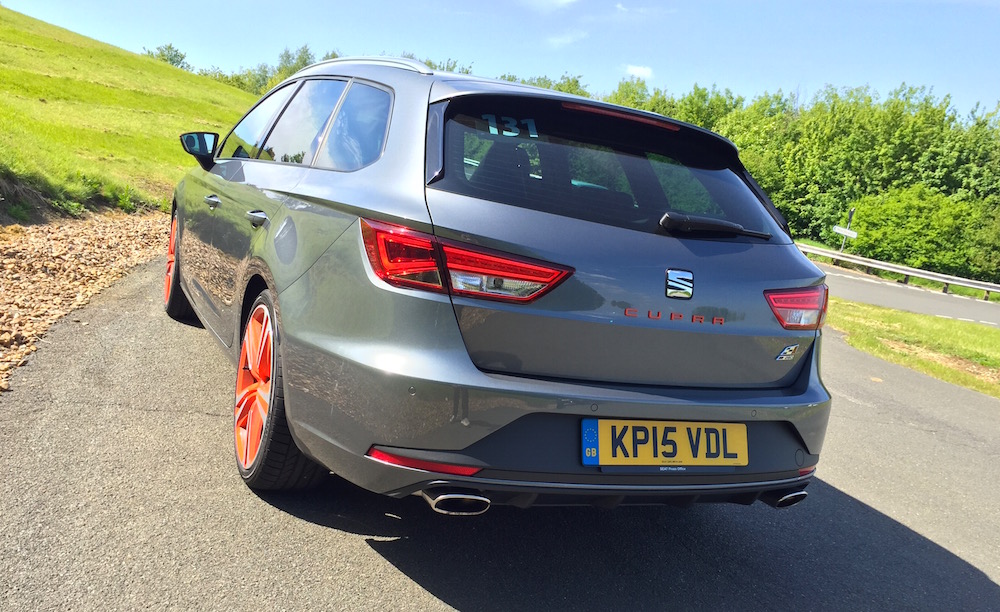 The ST Cupra is a fairly subtle looking machine, tangerine bits aside, and you could be fooled for forgetting it has 276bhp. 20 years ago that was the kind of power crazy Japanese machinery came with; now it’s available in a humble estate car. As such, the ST becomes a rather quick load-lugging wagon, with huge chunks of useable torque available low down. You can have a DSG gearbox, should you wish, but the six-speed manual is sweet enough that we would take the three-pedal version. 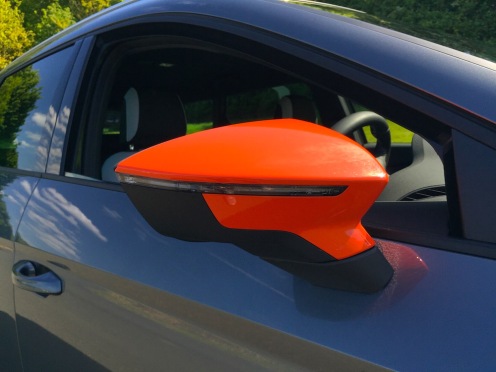 Around the hill route the ST Cupra was able to cover ground with ease, never feeling challenged by the steep inclines. In the real world, the power and torque would make for substantial cross-country pace, with strong brakes and accurate steering adding to the party. With multiple modes in the Driver Profile menu we, naturally, started out in sport mode which makes the car feel ‘dynamic’ but useable. In full-fat Cupra mode the ride become very, very, stiff but, as a bonus, you get the XDS differential set to its most aggressive, which helps in tight bends. There’s also the extra benefit of getting the most noise from the exhaust, even if it is filtered through a sound actuator. Helpfully, Seat allows you to set things in the ST’s Driver Profile individually, unlike many other VAG products, meaning you can have noise without the back-breaking suspension. 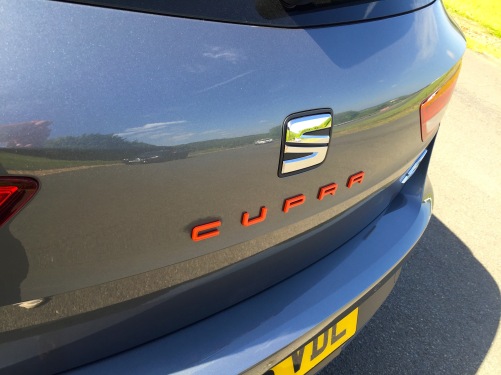 Amongst all the exotic machinery we drove, this was actually the one car (other than the Polo GTI) we could have very happily made the journey back north in. Although with the Driver Profile setting in sport mode rather than Cupra! But, in all seriousness, this is a genuinely well-rounded car that proves practicality needn’t be dull. We’d also pick this over the Megane Sport Tourer, too. It’s hard to find fault with the Leon ST Cupra, and it could happily fill that ‘all the car you’ll ever never’ cliché with ease.

Having started the day with a 5.0-litre V8 coupe, it seemed only right to end with one as well. We had it on good authority that we had to try an F-Type, and having spent all day hearing them snarl around Millbrook, it would’ve seemed rude not to. With a rock hard ride, hairtrigger throttle response, and an exhaust that makes a huge amount of pops, bangs and snarls in Dynamic mode, it’s impossible not to laugh a little at the F-Type. With so much power it is of course ridiculously fast, punching you back into the sports seats. With that 55mph limit, Millbrook’s hill route felt like it was constantly hemming the big supercharged V8 in, requiring you to almost immediately back off the throttle. 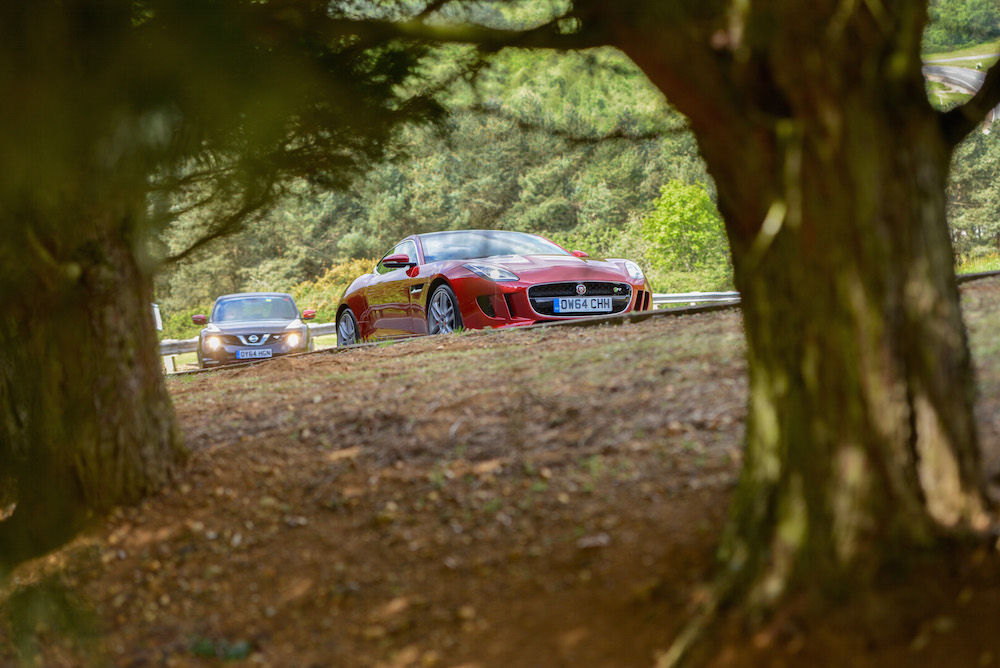 The exhaust is worth mentioning again. It creates so much noise, from the V8 snarl itself, to the unburnt fuel making it crackle on the overrun – it’s an extremely vocal car. At times you can’t help but imagine in the real world it all might be a bit too much, and you’d be embarrassed driving it through your local high street. But, at the same time, we’re all for silliness at ESM and at least the F-Type allows you to quieten the exhaust down should you so wish. We imagine that you could make the F-Type R smoke the back tyres if you wanted to, but Millbrook wasn’t really the place for that! A pop-up rear spoiler is standard, although we were never going fast enough to benefit from it. Seeing it rise in the rear-view mirror was cool, even if it does destroy the already minimal backwards vision. 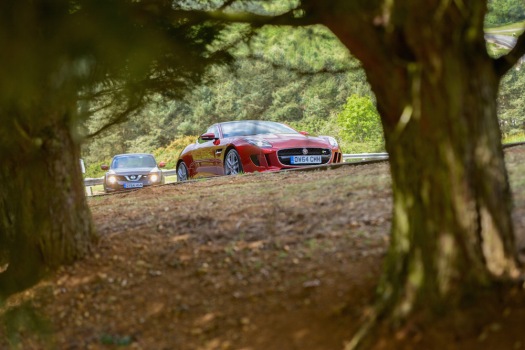 The conventional eight-speed automatic gearbox was a lesson in how you don’t need a dual-clutch system to have fast shifts, doing always what was asked of it. Steering was weighty and wonderfully accurate, inspiring confidence in what is a sizeable car. With a price tag pushing almost £90k, the F-Type’s interior did feel cocooning and expensive, although it is a riot of buttons on first glance. The air vents rising from the dashboard were a nice piece of theatre. Overall, the F-Type R is a deeply impressive car, and one which demonstrates just how well Jaguar have ditched the stuffy image of previous generations. In fact, that it hardly feels like a Jaguar at all in some ways, is intended as a compliment not a criticism.

That wraps up our quite epic trawl through driving twelve different cars in a single day; we’ll also have a feature summing up the overall experience soon. We also need to thank the SMMT, Millbrook, and the manufacturers for an excellent day.