ESM’s BTCC Correspondent isn’t one for holding back on his opinions. What did he make of the latest rounds? 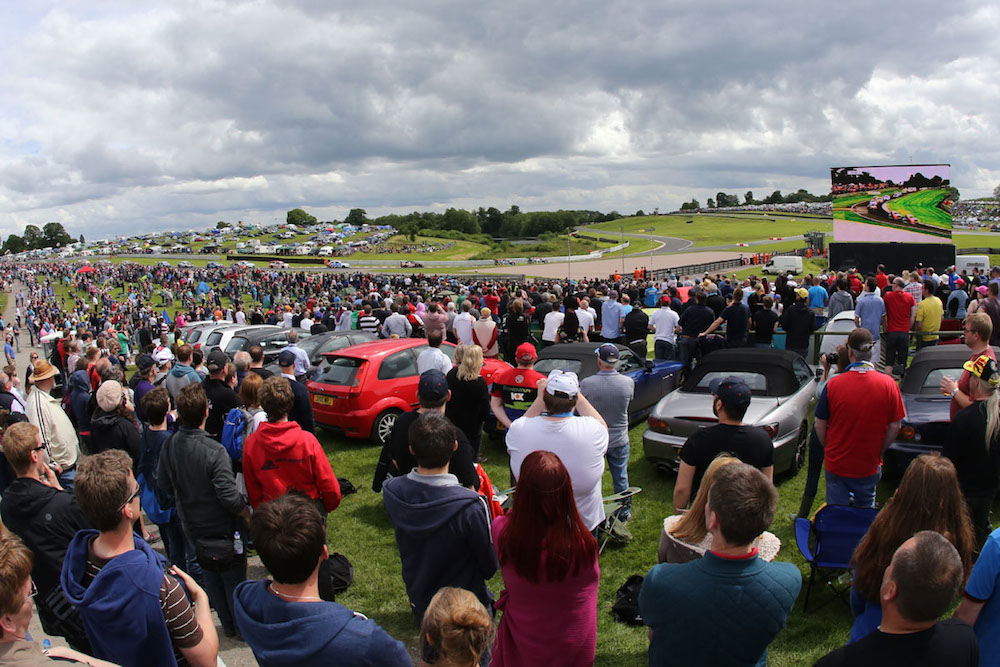 My short review above of the latest British Touring Car Championship rounds may be jovial, but I find it to be highly accurate. Of course, issues were still raised that need to be discussed.

Firstly, it was a great weekend for Jason Plato. A pole position, two race victories, one with full ballast, and a fifth place meant that he has now thrown down the championship gauntlet to the rest of the field, if it needed throwing down in the first place. If he hadn’t suffered a puncture at Brands Hatch on the last lap when set for victory, his lead in the championship would now be sizeable. However, every driver has an ‘if only’ story and luck arguably evens itself out over the course of a season.

Over the course of the season, you would hope your manufacturer would stay with you, but since the last race at Thruxton, the Support Our Paras team and Infiniti realised they had different expectations from each other and made the decision to split. It will be interesting to see where the 3 year project goes from here, with the team hoping to add a paying driver.

At Thruxton, Mike Bushell had a coming together with Simon Belcher in qualifying, ruining both of their weekends, and the decision to punish Bushell meant that he started Race One at the back of the grid as it was his third reprimand of the season.

The first race saw the top 4 from qualifying remain in position as Plato comfortably won from Matt Neal, Andy Priaulx and Andrew Jordan. Current championship leader, Gordon Shedden, finished 6th behind Aron Smith, but reigning champion, Colin Turkington finished down in 25th following a brake pedal issue that saw him carry on at Island Hairpin onto the International Circuit before re-joining. The race finished prematurely as a collision between Alex Martin and Stewart Lines saw the latter crash into the pit entry, resulting in a red flag following a safety car.

Race Two saw the top 3 of Plato, Shedden and Jordan get away cleanly and Rob Collard made a brilliant start to move up to 4th. Jeff Smith fell down the field after starting what must have been a BTCC career best of 6th following a quick lap in the earlier race. Adam Morgan was frustrated early on as he was unable to find a wide enough stretch of road to get past Aron Smith, although he was eventually successful on lap 10, in what was the only decent midfield battle of the race that also involved Sam Tordoff. Morgan had similar issues in the first race with Dave Newsham.

At the front, Plato had to work a lot harder for his race victory as Shedden pushed him all the way, but in reality he was never able to seriously challenge due to the nature of the track. A winning margin of 0.093s may look incredibly close, but in reality Plato was always going to win the race despite Shedden’s pressure. Jordan came home in 3rd, Neal 4th, Tordoff 5th and Morgan in 6th after Priaulx damaged teammate Collard’s suspension, whilst running in 4th, on the final lap at the Island Hairpin. Collard couldn’t finish while Priaulx limped home for 15th position.

To continue the less than exciting weekend, the reverse grid draw saw the least amount of changes possible as ball 6 of Morgan was drawn on pole for the most ‘exciting’ race of Sunday. However, Morgan made a small jump start at the start of Race Three and it resulted in a drive through penalty dropping him well back down the grid. Tordoff made a great initial start, but was forced onto the grass allowing Neal to pass him. On lap 6, the top 10 were all close together headed by Neal as everyone was finding it hard to pass each other. However, at the end of laps 8 and 9 similar moves by Tordoff and Jordan helped them pass Neal and into 1st and 2nd respectively. Jordan pushed Tordoff for the win in the later stages, but like race two, the lead was always unlikely to change and Tordoff became the 7th different winner of the season. Neal managed to take 3rd with Shedden 4th, Plato 5th and a weekend best of 6th for Turkington.

Plato now leads the championship from Shedden by 3 points having overturned a 12 point deficit. Plato predicted before the weekend that he would be quick and that was certainly true. Drivers do have good weekends, but to me it felt like Plato was having more than just a good weekend, it was more a case of ‘this is what I can do, what are you going to do to stop me winning the title?’ Reigning champ, Turkington, is currently 5th, 33 points adrift, and although there’s still a long way to go, you are starting to get the feeling that Plato is number one at Team BMR this season and if the winner come October is going to be driving a VW, then it’s going to be Plato.

However, next up is Croft, arguably Turkington’s most successful circuit over the years. It will be interesting to see what happens now he’s not driving a rear wheel drive BMW and whether he’ll still be able to continue his recent dominance in North Yorkshire. I fully expect the BMWs to be strong there again and now Tordoff has secured his first win with BMW to gain some extra confidence, it could be quite conceivable that we’ll see 3 different BMW winners in each of the races. Let’s just hope that Croft doesn’t follow the pattern of the season so far and we are able to see plenty of action and overtaking.

Oulton Park has been around for many years and ESM had a great trip there a couple of years ago, but the last two years have really worried me. Last year, there was a hugely unsuccessful experiment to race on the International Circuit leading to 3 processions, but this year on the more popular Island Circuit, we had the same issue. Maybe it isn’t the circuit option that’s the problem and it’s Oulton Park as a whole, as much as it pains me to say it. The BTCC can’t keep going to tracks that don’t produce enjoyable racing; much of the viewing public probably wanted to x30 forward on their Sky boxes, I did. But can you really take Oulton Park off the calendar? Let’s see what 2016 brings before putting any nails in coffins.

Some areas of the media have defended the racing and said it wasn’t boring because the winning margin in the second race was 0.093 seconds. Well, it probably would have been a lot more if Shedden could have found a wider piece of track to actually pass Plato, who in his defence, drove a masterclass of how to defend.

Another reason mentioned was that because the quality of the championship is so high, we don’t need passes and changes of the lead to make it exciting. If there weren’t overtaking manoeuvres to the limit and changes of leader, then why are we watching BTCC? I’m delighted the standard is so high, but I can watch this season’s Formula One if I want to see a procession. The whole reason I watch the BTCC is for the close racing and exciting overtaking manoeuvres.

Finally, I don’t believe you can say it wasn’t boring because Tordoff had to pass Neal for the lead of the final race. That’s what we expect to see at every track. Neal clearly had an issue for the couple of laps where Tordoff and Jordan past him as he ran wide at the exit of Lodge both times, so even then it was hardly like Tordoff had to come up with something magical to make the move stick.

Sometimes you can’t defend the indefensible and this weekend’s racing and action was poor, end of. Let’s hope for better at ESM’s local track, Croft, next time out.

Championship Standings after Round 12 of 30:

Team BMR – Volkswagen CC (Plato, Turkington, Scott, A Smith)
A fantastic weekend for Plato and the others did well albeit under the radar slightly. Aron Smith bagged some useful points with 3 top 7 finishes and Warren Scott managed to finish all 3 races for the first time this season. 8/10

WSR, Team JCT600 with GardX – BMW 125i M Sport (Collard, Tordoff)
WSR, Team IHG Rewards Club – BMW 125i M Sport (Priaulx)
Not a great weekend for Priaulx and Collard for various reasons, but Tordoff is starting to look more comfortable and competitive in the BMW. He deserved his victory in the final race. 7/10

Honda Yuasa Racing – Honda Civic Type R (Neal, Shedden)
The switch back to a hatchback version of the Civic seems to be paying dividends with yet another great weekend for the Hondas. 2 seconds, a third, 2 fourths and a sixth is a great return for a weekend although it missed a victory. 9.5/10

MG 888 Racing – MG6 GT (Goff, Jordan)
Jordan looked back on the pace for the first time in a long time this weekend. Jordan looked like the champion he was in 2013 and that’s been missing for a while. A fourth, third and a second for him meant he’ll have been a happy boy on Sunday evening. Three top 9 finishes for Goff too. 8.5/10

Exocet AlcoSense – Audi A4 (Abbott, Austin)
No points for Abbott this weekend while Austin picked up a couple in the first 2 races. It seems to be a quiet season for them. 5.5/10

Motorbase Performance – Ford Focus ST (Cole, Jackson)
We won’t be seeing Motorbase until Snetterton due to financial sponsorship issues, although they have been testing recently.

Eurotech Racing – Honda Civic (Depper, J Smith)
Jeff Smith had a brace of 10th places and Depper had a couple of points scores too. Another decent weekend for the team. 7/10

Welch Motorsport – Proton Persona (Welch, Wilmot)
Finally something to cheer for Welch Motorsport. Dan Welch started and finished all 3 races for the first time this season, picking up a point in the process, and Wilmot had a couple of finishes too. 5/10

Infiniti Support Our Paras Racing – Infiniti Q50 (Palmer)
Just one Infiniti this weekend and it had its best results of the season, picking up some points in the Independents’ races. 5/10

WIX Racing – Mercedes-Benz A-Class (Morgan)
Morgan will be kicking himself for the jump start in the final race, but 6th and 11th kept his points ticking along. 7/10

Laser Tools Racing – Mercedes-Benz A-Class (Moffat)
Improved as the weekend progressed and picked up a few points too. 6/10

Handy Motorsport – Toyota Avensis (Belcher)
Normal service resumed at the back for Belcher. 3/10

Speedworks Motorsport – Toyota Avensis (Ingram)
Ingram continues to flirt with the positions around 10th and he picked up more points for the season in each race. 7/10

Houseman Racing – Toyota Avensis (Lines)
Lines looked shaken after his big smash in the first race, but he recovered for a 19th and 20th. 4/10

Dextra Racing – Ford Focus ST (Martin)
Martin was punished for his role in Lines’ pit entry crash and was towards the back again. 4/10

AmD Tuning – Audi S3 Saloon (Hamilton) Guest racer
Hamilton is due to start his BTCC career at Croft next time out. It’ll be interesting to see how he gets on.

Last of all, well done to ITV for listening to the viewers. Many complaints were made about their coverage at Thruxton, including from ESM’s Editor, about how they were focussed on the pit lane and Mrs Shedden/Turkington/Plato etc. Although we still had images from the pit lane, at least this was now done with a split-screen so you could still see what was happening on the track.