With the British Touring Car Championship at ESM’s home circuit, there was never any doubt as to whether we would be in attendance. But, would it be a Sunday to remember, or another snooze-fest like Oulton Park? Our BTCC Correspondent tells the story below:

After Oulton Park, things could only get better for the BTCC and they certainly did at a BMW dominated Croft. There was a win apiece for each of the WSR members and a historic 1-2-3 for the team in the opening race. The championship lead has changed hands following the weekend’s action and Gordon Shedden heads the way into the summer break. However, it was the return of ‘racing’ that meant it was a good day for BTCC fans.

Race One saw the winner from last time out on pole, Sam Tordoff, followed by his teammate Andy Priaulx, Gordon Shedden, Rob Collard, Colin Turkington and Matt Neal. The championship leader going into the weekend, Jason Plato, was down in 12th. Unbelievably, it was the first time since Silverstone 2006 that Plato hadn’t qualified in the top 10. By my rough calculations, that’s about 90 meetings which I find astonishing. However, Plato wasn’t happy with his position and he came up with a cunning plan, within the rules, to set himself up for a better weekend.

Plato came into the pits at the end of the green flag lap to re-join the race from the pit lane in clear air to set a fast lap for a good grid position in the second race. Another advantage of his plan was that he’d lose his weight as well, leaving him with a good grid positon and no weight. You could say his plan worked as he ended up third for the second race. However, we can, of course, question the morality of it all. Technically, he did nothing wrong, it was within the rules, but do we want drivers doing this every weekend? No, definitely not. As a one off, I think we can just about justify it and hope that Alan Gow can find a way to stop this loophole.

Race One saw Tordoff get away cleanly as the BMWs roared into the first 3 positions in a race that started under dark clouds. However, on lap 6, Priaulx was able to take the lead from Tordoff with a move up the inside of him at Tower. Priaulx held on for the race win and was followed home by Tordoff and Collard after the latter failed in his bid to get past Tordoff despite good pressure. It was amazing to see an all WSR podium!

The slight rain threatened to throw the race into chaos, but it stopped as quickly as it started. It was just another element that made it more exciting than Oulton and there were probably more passes in the final 5 laps than there were in the whole of all of the races last time out. Croft’s abrasive surface clearly hampered the tyres, especially on the front wheel drive cars, and it allowed for lots of late drama. Rob Austin, who’d had a great race, using his rear wheel drive advantage like the BMWs, was a big casualty of poor tyres as he fell well down the pack towards the end. Shedden was the best of the rest in 4th, Neal in 5th with Andrew Jordan and Turkington coming home in 6th and 7th.

Sunshine beamed down for the day’s second race as Tordoff started on pole from Priaulx, Plato, Shedden, Turkington and Collard. It was the usual good start from the BMWs as Tordoff maintained his lead and Turkington and Collard were able to get past Shedden on the opening lap. Lap 3 saw a great bit of team work as Plato found a VW CC sized gap at Tower to launch it up the inside of Priaulx for 2nd and Turkington followed him through for 3rd. The top 4 remained in position for the rest of the race despite Plato having to defend from Turkington late on.

It was the battle for 5th that provided much of the entertainment at the front end as Shedden, Collard and Austin fought out a hard battle that brought great racing. I’m still not sure how Shedden and Collard survived the race distance as it looked for all the world that Shedden was going to have an almighty crash with Collard pushing him sideways through one of the fastest corners of the circuit. It was great to watch and it showed what had been missing from the last couple of meetings. There were good, close battles further down the grid too.

There was a possibility of a late safety car as Josh Cook lost it at the first corner and made heavy contact with the tyres, leaving a rather damaged Chevrolet that was amazingly fixed for the final race. However, the safety car didn’t appear, leaving Tordoff to take his 2nd win in 3 races from BMR duo Plato and Turkington, Priaulx and Shedden, who got the better of Collard in the end.

Collard was on pole for the final race as the reverse grid draw saw the least amount of changes possible. Priaulx was able to overtake Shedden at the start for 2nd, but Shedden soon regained the position at Tower. The end of the opening lap saw Austin give out, and take, a battering to and from several cars, damage that eventually saw him retire. However, it was soon about Shedden and Collard again. Lap 3 saw arguably the move of the season so far, as Shedden and Collard ran side by side through the incredibly high-speed Jim Clark Esses and Shedden emerged in the lead. It was a fantastic move on a lap that saw Jordan in the pits with rear wheel damage.

Plenty of cars will have left Croft in need of repair thanks to the many tyre stacks positioned to stop the drivers cutting corners on top of the usual incidents; one of which saw Alex Martin with substantial rear end damage thanks to the barriers after contact with Aron Smith at Sunny.

Neal was having a good race on soft tyres, like teammate Shedden, but both began to struggle towards the end of the race as their tyres lost their grip. Collard soon closed the gap on Shedden and made his way through at Hawthorns with 3 laps remaining. Collard amazingly pulled out a 7 second gap in the remaining laps, such was his pace and Shedden’s lack of. Shedden looked to have held off Priaulx to remain in 2nd with good defensive driving on the last lap, but that was until the last corner and Priaulx powered through to take 2nd to bring to an end an entertaining day of racing. Turkington was best of the rest in 4th with Plato behind him and Tordoff taking 6th.

Tordoff has dragged himself into 4th in the championship standings after some impressive recent races. It will be interesting to see if he can continue his form after the break. However, Shedden has opened up a 10 point advantage over Plato with Neal a further 12 behind. I honestly believe the championship will be between the current top 3, but each race meeting is so intriguing because each track seems to favour a certain team and car. Next time out will be Snetterton and you would suggest that BMR will be stronger there, before we visit Knockhill which will suit the BMWs and Hondas going on recent history.

A final point to note from the weekend was the BTCC debut of Nicolas Hamilton. I think he did a great job under the intense scrutiny he found himself under and it was great that his Dad was there to support him, as he is for older brother Lewis. Nic was very accommodating to all the fans who were after his photo and autograph and although he didn’t have the best of weekends in terms of pace, he did finish all 3 races, which isn’t bad on your first attempt at this level. 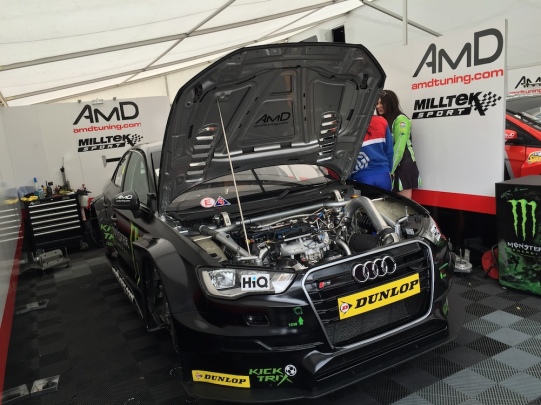 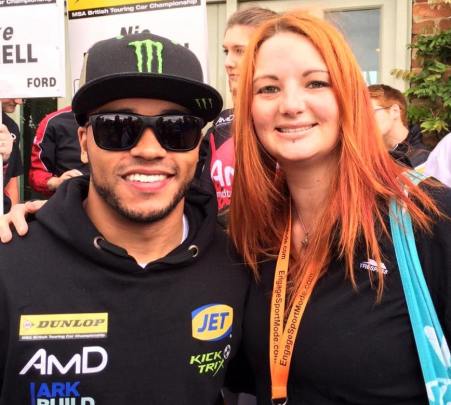 The ‘other’ Hamilton makes a new friend.

Championship Standings after Round 15 of 30:

Team BMR – Volkswagen CC (Plato, Turkington, Scott, A Smith)
Turkington was very consistent throughout the weekend scoring good points and Plato wrote off the first race for an advantage in the remaining races in a gamble that probably worked, even though it seemed mad to rule out the possibility of points in the first race. Scott had his best ever BTCC finish of 10th in the final race, while Smith didn’t have the greatest weekend at all. 7/10

Honda Yuasa Racing – Honda Civic Type R (Neal, Shedden)
Shedden will be delighted with his points haul from the weekend as he now leads the championship again. Neal continued to plug away scoring good points on a rear wheel drive suited track. 8/10

MG 888 Racing – MG6 GT (Goff, Jordan)
Not a great weekend for MG again at Croft. They will have much stronger weekends before the end of the season. 6/10

Exocet AlcoSense – Audi A4 (Abbott, Austin)
Much better from both Austin and Abbott this weekend. The track obviously suited them, but it was nice to see them both in the top 10 at points. 7.5/10

Eurotech Racing – Honda Civic (Depper, J Smith)
An eventful weekend for the team with plenty of damage to fix. Didn’t reach the heights of Oulton Park. 5/10

Welch Motorsport – Proton Persona (Welch, Wilmot)
Plenty of damage of these cars too. The car is in desperate need of more pace. 4.5/10

Infiniti Support Our Paras Racing – Infiniti Q50 (Coates, Palmer)
Not a bad debut for Coates and Palmer did his usual job. 5/10

Laser Tools Racing – Mercedes-Benz A-Class (Moffat)
Nothing to note really from the weekend. 5/10

Handy Motorsport – Toyota Avensis (Belcher)
Not the greatest weekend for Belcher at Croft. He’ll be hoping for better next time out. 4/10

Houseman Racing – Toyota Avensis (Lines)
Not a great weekend at all. Slow. Score is given on the editor’s advice… – 5/10 [Which is generous – Ed]

Dextra Racing – Ford Focus ST (Martin)
ESM found out that he likes a soft ice cream as he was ahead of us in the queue. Did well to carry on with massive damage in the final race. 5/10

#RacingforHeroes – Chevrolet Cruze 4dr (Cook)
A big smash for Cook in the second race, but he and the team did well to race in the third. 6/10

AmD Tuning – Ford Focus ST (Bushell)
Bushell is still suffering from his big accident at Thruxton and that’s hampering his racing. Did ok though. 5/10

AmD Tuning – Audi S3 Saloon (Hamilton) Guest racer
A good start for Hamilton, finishing all 3 races. He was pretty much last in each of them, but you’ve got to start somewhere. 6.5/10

The BTCC heads off on its summer break, so we’ll be back in August for the action from Snetterton.