As the 2015 British Touring Car Championship heads into Autumn, the action at Rockingham has set up a two-way fight for the title. ESM’s BTCC Correspondent analyses it all. 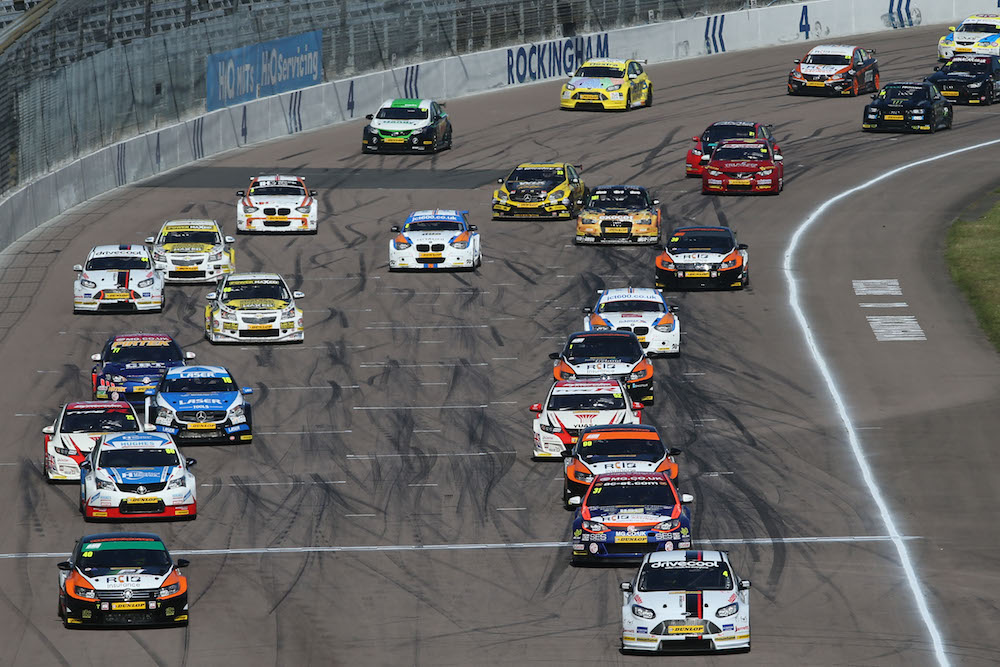 Gordon Shedden now leads the British Touring Car Championship by 6 points following the latest rounds at Rockingham. Shedden had a superb weekend with a 1st, 2nd and 8th while previous leader Jason Plato was left struggling after 3 cars into 1 corner didn’t go, in the opening race, leaving him playing catch-up. It’s been a poor couple of rounds for Plato following dramas at Knockhill last time out too and Shedden has taken full advantage. However, the momentum may have turned back in Plato’s favour as a final race victory ensured he left Rockingham with only a 6 point deficit, having been 20 behind after race two.

It’s hard to see Andrew Jordan winning from 5th in the championship now, as he’s 46 points down and while Matt Neal and reigning champ Colin Turkington are 27 and 33 points down respectively, it would seem very unlikely that Shedden and Plato would both drop that many points to allow them a sniff of silverware. I have said for a long time now that the title will be between Shedden and Plato, with me slightly favouring Plato, and I still have no reason to change that opinion. 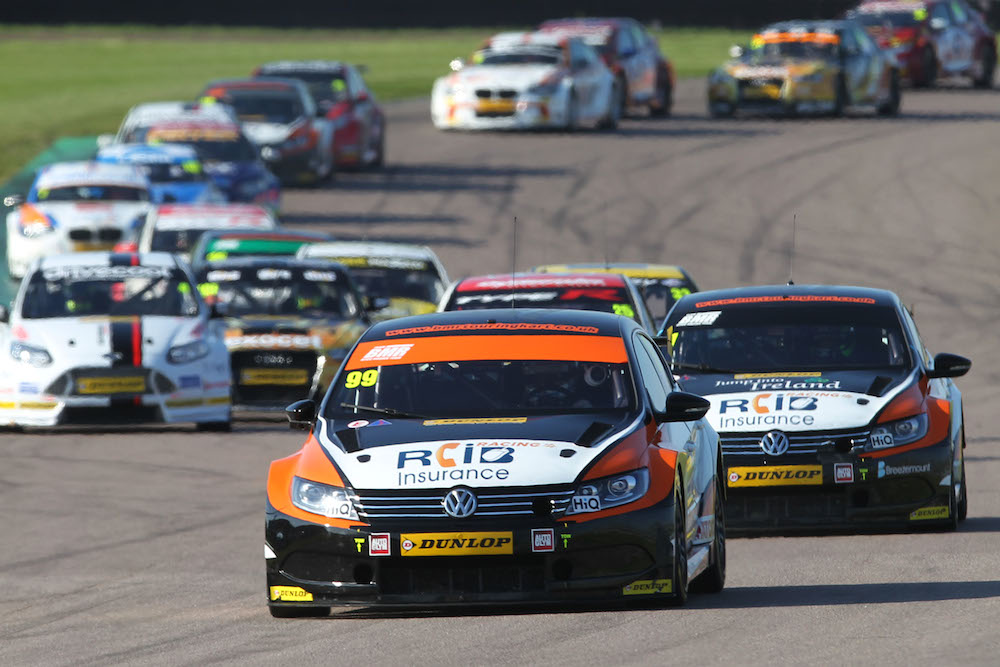 Rockingham’s entertainment value grew as the day progressed with a modest first race, a second race that came alive at the end and a highly entertaining final race. The first race was deservedly won by Mat Jackson who controlled the race throughout for a lights to flag victory. It is astonishing that Jackson found himself at the front of the grid with Motorbase’s first ever Saturday pole position. Motorbase’s cars have generally performed so well over the years; it is hard to fathom how they haven’t had a pole before. Following Knockhill, I commented on how impressed I was with this Focus package and after another strong display, goodness knows where Jackson would have been in the standings had he competed in the opening 15 races of the season. He already has 105 points from just 9 races. I’m not saying Jackson would be challenging Plato or Shedden for the outright title, but I’m sure he would have been in the top 6 mix, easily.

While Jackson is perhaps classed as an ‘old’ pro in the BTCC now, I find I’m regularly commenting on some of the younger drivers after each set of races. This time is no different as I once again praise Josh Cook and Tom Ingram. Cook had an amazing charge through the field in the second race as the action climaxed at the end, with Cook taking the last podium position from Adam Morgan at pretty much the final corner on the last lap of the race. Ingram has shown flashes of brilliance this year, but I’ve often found he’s ended up finishing further down than his performance has deserved. Not on Sunday.

The reverse grid pole gave him another chance to showcase his talent in an intense battle with Plato, who he’d inadvertently damaged in the first race. Ingram showed a determination we’d have been more accustomed to Neal showing Plato in one of their intense battles of years back. Ingram never gave up. Anything Plato tried, Ingram had it covered. When Plato got past, Ingram stayed with him and took the position back. It was a valiant effort, and although Plato finally secured the lead with about a quarter of the race remaining, for me, and many others, the real winner was Ingram. However, those extra couple of points could prove vital to Plato come the end of the season.

The third race must have seen the highest number of retirements for a long time, with only 18 cars finishing after a starting grid of 30. Retirements are, of course, inevitable, but some of the drivers hardly helped themselves with poor out-braking decisions and reckless manoeuvres. I’m not complaining though, as the sub-plot to the Ingram/Plato battle, proved highly entertaining.

While we want entertainment, the drivers want points and naturally they will do whatever it takes to secure them. Following Plato’s pit lane start at Croft, completely legal under the current rules, we have now seen several drivers try this in the first race of the day in the hope of having a clear track to set a better lap time for the second race’s grid.

Jeff Smith was one of those to chance his arm this time and again it worked, with him securing 5th place for the second race. How much longer can this continue though? With the greatest respect to Jeff Smith, do we really want or need the person who is 19th in the championship trying this tactic too? I’m not saying I agree with Plato’s actions, he found a loophole and many others are now exposing it, but I once again question the morality of it. Is it allowing drivers a ‘get out of jail free card’ when they’ve had a poor qualifying? What happened to good old racing through the field and performing overtakes filled with danger? I think the loophole needs to be seriously looked at. On occasions, cars will need to start from the pit lane because of genuine issues, but how about saying, if you start from the pit lane in the first race, you get a 10 place grid penalty for the second? That may provide some deterrent to the immoral, yet legal practice we see happening on now a regular basis.

Hopefully, there’ll be no need for the top runners to perform such tricks at Silverstone next time out, although I’ll be watching out for Stewart Lines or such like, as they try to make a jump on the field. Silverstone should favour the BMRs again, while I feel Brands Hatch will probably be similar to Rockingham. The pressure will be on Plato next time out, will he be able to build a lead at a circuit that should favour him? Only time will tell.

Championship Standings after Round 24 of 30:

Team BMR RCIB Insurance – Volkswagen CC (Plato, Turkington, Scott, A Smith)
A much better weekend for BMR compared to Knockhill. 3 podiums over the weekend and 2 of the drivers are still in with a shout of the championship. Silverstone should favour them next time out. 7.5/10

WSR, Team JCT600 with GardX – BMW 125i M Sport (Collard, Tordoff)
WSR, Team IHG Rewards Club – BMW 125i M Sport (Foster)
Possibly the poorest we’ve seen the BMWs this season. Collard had an absolute nightmare, not scoring any points, Tordoff struggled in the early races and Foster, in for the absent Priaulx who was racing in a different championship, showed why he isn’t racing regularly this season when we know how good Priaulx’s car is. 4/10

Honda Yuasa Racing – Honda Civic Type R (Neal, Shedden)
Another superb weekend for Honda, especially Shedden. A 1st and 2nd has really cemented Shedden’s challenge and Neal had good results too, despite a late puncture in the first race. 9/10

Exocet AlcoSense – Audi A4 (Abbott, Austin)
Another good weekend for Rob Austin despite a poor finish in the opening race, but not great for Abbott with a brace of 23rds and a retirement, despite showing lots of promise during the races. 7/10

Motorbase Performance – Ford Focus ST (Cole, Jackson)
Jackson really has this car going well. A 1st, 2nd and 14th meant another good haul of points. A couple of points for Cole this time too. 8/10

Eurotech Racing – Honda Civic (Depper, J Smith)
A couple of points for Depper and solitary one for Smith. In the wars a little too. 5.5/10

Welch Motorsport – Proton Persona (Welch)
Welch hit the wall in the 3rd race and I’m still not sure how. It was an odd looking incident. Unsurprisingly, no points this weekend. Again. 4/10

Infiniti Support Our Paras Racing – Infiniti Q50 (Palmer)
Poorest set of results of any meeting for Palmer so far. Not really working out for Palmer or the Paras. 1/10

WIX Racing – Mercedes-Benz A-Class (Morgan)
Morgan was beaten on the last lap for a crucial podium position again at Rockingham, he will he hoping for better look at Silverstone. Had a couple of excursions in the final race too, but he did pick up some useful points during the day. 6.5/10

Laser Tools Racing – Mercedes-Benz A-Class (Moffat)
Moffat was unable to back up his brilliant podium at Knockhill with any serious results this time out. Retirements sandwiched a 13th place. 4.5/10

Handy Motorsport – Toyota Avensis (Holland)
A couple of finishes and a retirement for Holland this time. 4/10

Speedworks Motorsport – Toyota Avensis (Ingram)
5th, 10th and 2nd will mean Ingram is very pleased with his efforts at Rockingham. He was the star of the final race. Will it continue next time out or will he revert back to not quite having it all race? 8.5/10

RCIB Insurance Racing – Toyota Avensis (Gallagher)
Oh Kieran. Just not happening is it? Too much damage from a first race crash meant a DNS in the second. Retired in the third too. Hoping for better next time out. 2/10

Houseman Racing – Toyota Avensis (Lines)
Nearly got a point for being 16/18 in the final race. Only nearly though. 3/10

Dextra Racing – Ford Focus ST (Martin)
I have Martin down as a bit of a feisty competitor. Doesn’t make it easy for anyone in his interestingly coloured Focus. Scored his first points of the season in the final race. 5/10

#RacingforHeroes – Chevrolet Cruze 4dr (Cook)
A superb podium for Cook in the middle race of the day. Looked good in the other races too, but didn’t have the ultimate pace to challenge for higher positions. 7/10

AmD Tuning – Ford Focus ST (Bushell)
Found himself the cause of a safety car thanks to his beached Focus, but he did pick up a point in the opening race. 5/10

AmD Tuning – Audi S3 Saloon (Hamilton) Guest racer
Hamilton was back after missing Knockhill and he did well by finishing all 3 races. 5/10