When thinking about the Ferrari F12berlinetta, what would be the first thought that would come to mind? For the guys at Maranello ‘making it even faster’ seems to have been the first lightbulb that popped into mind.

Although the future of Ferrari looks firmly set to be turbocharged – take the new 488 GTB, for example – the Italian firm is still very capable when it comes to natural aspiration. So capable that they’ve extracted 40bhp from the 6.3-litre V12 engine, taking total output for the F12tdf to a faintly ludicrous 770bhp. Torque is equally impressive, with 520lb-ft of it available at 6,750rpm.

It’s not all about power with the F12df though. All of the bodywork panels have been changed, which gives the tdf a far more aggressive stance. In fact, in the yellow and black colour scheme used for the press photos, the F12tdf has more than a passing resemblance to the Corvette C7.R racer. Thanks to the changes, the tdf produces 1.6 times mores downforce than the regular F12berlinetta, whilst also accommodating wider front wheels. A new ‘Virtual Short Wheelbase’ aids cornering through the use of rear wheel steering. 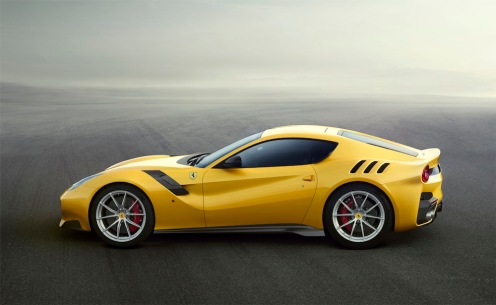 Despite the bigger bodywork and more technology Ferrari has hacked 110kg from the F12berlinetta which, when combined with the increased power output, results in explosive performance. 0-62mph happens in just 2.9 seconds, whilst 0-124mph is over in just 7.9 seconds. That’s quick; seriously quick. An Extreme Design braking system, borrowed from the LaFerrari, helps the F12tdf stop as fast as it goes. 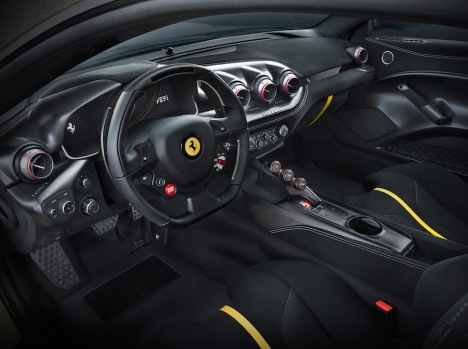 The ‘tdf’ part of the name comes from the historic Tour de France race – the car one, not the bicycle one – that Ferrari dominated throughout most of the late 1950s and 1960s. As a 250 GT variant, the Tour de France cars used a Columbo V12 engine producing between 237 and 256hp – just slightly down on the modern F12tdf! However, with 250 GT Tour de France cars selling for $13.2m, you can bet the contemporary version will be something of a relative bargain.

Ferrari hasn’t released exact pricing details just yet, but has stated just 799 examples will be built. That doesn’t actually sound quite so rare or limited edition to us, but we’re sure the demand for them won’t be hindered by it.