Ferrari’s FF has tried hard to be the practical V12 supercar. But now there’s a revised version with even more power. Let Ned Jasper give you all the details, including that new name.

This is the Ferrari GTC4Lusso (great name by the way, but we’ll get to that later), and it’s Ferrari’s latest attempt to try and market their cars at people with a family. Or indeed the kind of chap who likes to go on long cross-continent road trips with their mates, carrying all of their belongings, and traveling at speed. As to whether this exceptionally wealthy family man, or continent-crossing playboy, actually exists is another matter. But don’t let that put you off.

On paper the GTC4Lusso appears to be a relatively sane car. It’s dripping with technology, has four large and no doubt comfortable seats, boasts a usable boot, and is pumped full of safety features. There’s ample air bags, all wheel drive, and even a new four-wheel steer system (previously seen in the F12 tdf). This however is not a ‘sane’ car; it’s a Ferrari. That means that at this beast heart lies that same 6.3 V12 only this time it’s pumping out a whopping 681 bhp. That’s 30 more than the old FF could muster. Not only that, the reworked engine now gives a chunk more torque as well; 514 lb-ft to be exact. All of which means that this prancing horse can now gallop from 0-62 mph in 3.4 seconds (0.3 quicker than the FF), and it’ll keep on accelerating to 208MPH. This is a “family” car, remember.

At first glance, the GTC4Lusso seems to look almost identical to the car it replaces. Look a little deeper, however, and you’ll find that in actual fact almost every panel on the new car is different. Most noticeable of these alterations are the sexy little wing vents (similar to the gills of a shark), and the new more pronounced rear haunches. The latter allows the GTC4Lusso to sink a little further into the pavement, whilst also gain a more menacing road presence. The new bonnet and front grilles which, especially in grey, make the car look a lot more agile and bring strong connotations of the immense power which is lurking underneath. Finally, the rear. In my eyes – I’ve no doubt you’ll agree – the back of this car looks absolutely stunning. The whole car is already the automotive equivalent of a stunning Italian supermodel, but the rear end, now that’s the standout feature for me. The mixture of sharp razor-edged creases, and smooth free-flowing curves, make it an absolute feast for any like-minded petrol head. 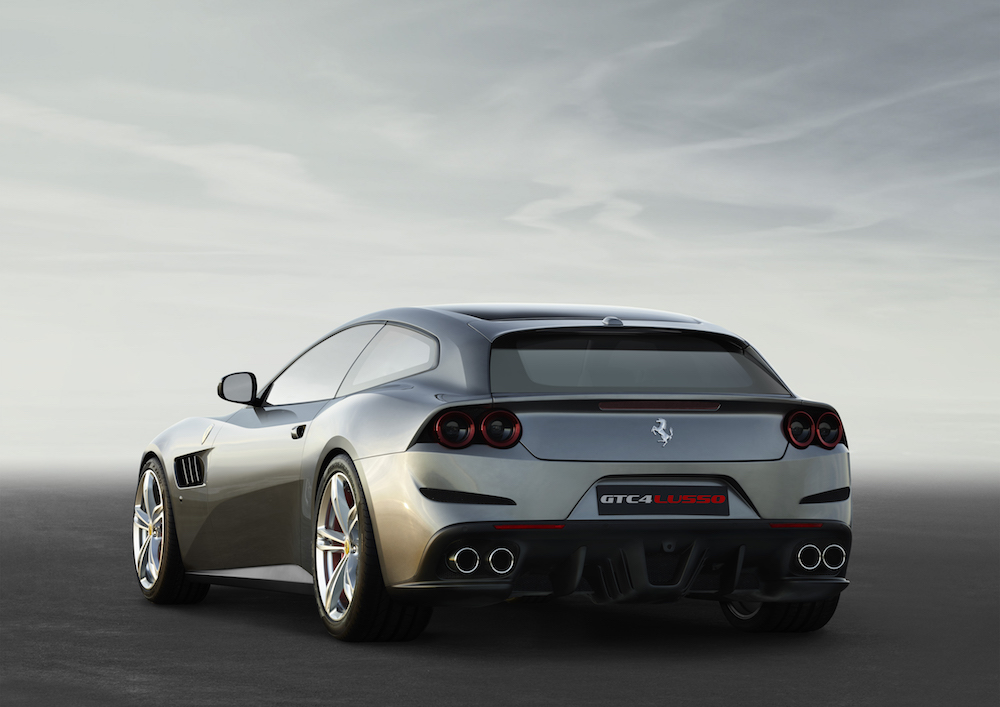 The cabin of the GTC4Lusso is everything you would expect from a mile-devouring V12 GT Ferrari. It’s filled with objects which manage to incorporate so many different suave colours, artist sculptured curves, and the kind of materials that would be more accustom to a Savile Row suit or a 5-star hotel. All Ferrari interiors are a work of art, and this one is no different with its focal point, tablet-style infotainment screen, cockpit like air vents, and seats that look erm, gorgeous.

Ok, I promised I would get around to it; the name. For most people, changing the name from two simple letters to a tongue-twisting combination of letters, number and a word may seem a little strange.  In the world of Maranello it is, in fact, perfectly logical, and it even harks back to Ferrari models of old. GTC stands for Gran Turismo Competizione, just like the 330 and 365 GTC that came before it – decades ago, mind. The 4 stands for the seats; there’s four of them, of course. And Lusso? That’s just ‘luxury’ in Italian. But is also reminiscent of the iconic 250GT Lusso back from the 60’s. History lesson complete.

So, fancy one of these to cart the kids around in? Or perhaps to go skiing in with a few mates? The chances are, you can get one, providing you have at least £200,000 to spare. There’s no word on official pricing yet, but expect to see more in the coming weeks at Geneva. Ah, Switzerland, that’s the place for the GTC4Lusso.