With the 2017 BTCC title going down to the wire, Brands Hatch was set for a knockout battle.

After another thrilling weekend of action, the British Touring Car Championship has a new name on the coveted trophy – Ashley Sutton. Sunday was certainly another day of twists and turns, but even Saturday’s qualifying session made headlines.

Sutton went into the weekend with a 10 point gap over nearest, and only realistic rival, Colin Turkington. A rain and red flag affected qualifying certainly went Sutton’s way as he qualified third behind Jack Goff and Aiden Moffat. Turkington’s BMW suffered electrical problems, not for the first time this season, and it meant he could only qualify in 17th.

Another disappointment for Turkington was that potential ally, in the form of teammate Rob Collard, had to withdraw from the weekend’s action after free practice as he was still suffering the effects of his heavy crash at Silverstone. Turkington’s other WSR teammate qualified a place behind him in 18th. While two of Sutton’s teammates qualified well down the pack, Jason Plato qualified in a handy 10th, although none of the teammates had particularly much impact on Sunday.

Race one certainly went Sutton’s way as Turkington struggled to make progress while Sutton took 3rd. Conditions appeared tricky at the start of the race as the track was damp, but drying. Astonishingly, no safety car was needed throughout the race, although Goff lost it at Paddock Hill bend on the opening lap and Adam Morgan had a few encounters with the barriers too. By lap 6, the cars on the slick tyres were starting to go quicker than those on the wet versions. The race was generally quite good, with the top 3 of Moffat, Tom Ingram and Sutton challenging each other well and by lap 10 they had a 15 second gap to 4th.

Towards the end while Sutton was, stupidly, considering what was at stake, attacking Ingram for 2nd, Turkington who’d make his way up to 12th started to lose places and after a final lap incident with Matt Simpson. He finally finished a lowly 15th to gain a solitary point. The gap to Sutton was now 24 points. 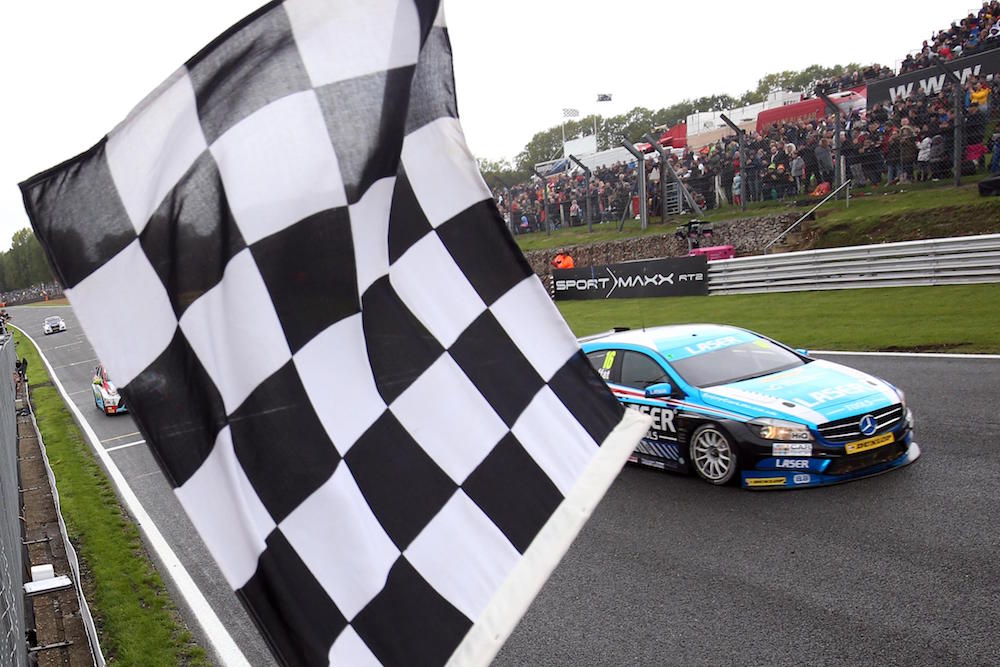 At the front, Moffat won his second race of the season in what was a great drive to stave off Ingram’s challenge. Meanwhile, Mat Jackson came 4th with the Power Maxed Racing duo of Tom Chilton and Senna Proctor finishing and impressive 5th and 6th – Chilton’s best since the third round of the season and Proctor’s best ever.

While race one looked for all the world that Sutton had pretty much secured the championship, the second race soon put it in massive doubt as it was The Colin Turkington Show. Turkington started 15th, with no weight and on the prime tyre, and he produced one of the most sensational drives seen by a BTCC driver in a long time.

Turkington started well and on lap two he set the fastest lap, for an extra point, as he made his way up to 12th. Around half distance, while Sutton had dropped back in the pack, Turkington had made his way up and he was soon disposed of with ease. The charge continued as Turkington was able to take Shedden for 3rd on lap 11 and Jackson for 2nd a lap later, which in turn also helped both Hondas overtake Jackson too. Then, the controversy…

Turkington was clearly the quickest car on track by a long way, but as Moffat, who’d done a great job to lead for so long with full ballast, braked at Paddock Hill Bend, Turkington nudged his rear end. Moffat was sent wide and Turkington inherited the lead, which he saw home for his fourth win of the season. Sutton meanwhile, struggled for pace and eventually finished 12th and out of the reverse grid draw mix. The gap was down to just six points.

Turkington’s move on Moffat was to be deemed unfair by the stewards, for which he received a £500 fine and 3 penalty points, but crucially for him, he kept the win. A fair punishment? That debate could continue for hours, especially if the outcry on social media was anything to go by – mostly in favour of Sutton. While a lot of debate centred around why Turkington wasn’t moved to the back of the grid like Sutton was at Silverstone, those who understand the BTCC rules will realise it wasn’t Turkington’s third strike of the season. It was a shame that driving standards and the perceived inconsistent punishments dominated proceedings once again, but why change a habit of a season?

The reverse grid draw, made by the legendary commentator Murray Walker, was unkind from Turkington’s point of view with ball 10 being chosen, which promoted Mike Epps to pole.

Epps started well and held off the initial challenge from Rob Austin, although not for long, while Sutton and Turkington both made good starts on the opening lap. On the second lap, the championship was decided. Ingram and Jackson touched in front of Turkington and as Turkington made his way by, a sideways moment correcting Jackson’s front end collided with Turkington’s rear wheel breaking the suspension. It was only Turkington’s second retirement of the season – his other ironically coming in the first race of the season, also at Brands Hatch.

Following a safety car to recover Proctor’s car, Sutton continued to move forward as he challenged Goff for 3rd, while Austin was well clear in the lead. Epps’ brave defence of 2nd came to an end on lap 9, as a push to pass from Goff did the trick and Sutton also followed through. Epps finished a BTCC best 5th in the end, in what must have been a bit of a bittersweet moment after being in a podium position for the majority of the race.

Austin took a maiden victory for Handy Motorsport in the final race for his Toyota Avensis before switching to an Alfa Romeo Giulietta next season. I don’t think too many Austin fans will be as sad to see his latest car go the distance as they were his Audi A4, Sherman. Goff finished an impressive weekend 2nd, with new champion Sutton taking the final podium position. Ingram secured 4th which helped him take an overall third in the final overall standings as well as the independents’ crown.

However, this weekend was all about Ash Sutton taking the outright British Touring Car Championship title. Despite Turkington’s best efforts, especially in the second race, there was to be no denying Sutton. After the opening weekend, where Sutton didn’t score a single point and the Subaru looked very poor, he has been simply outstanding; a deserving new champion.

Championship standings after 30 races out of 30: