BTCC returned for the second race weekend of the 2018 season. Could Donington Park match the excitement of the season opener?

After a somewhat unusually entertaining start to the season at Brands Hatch, would Donington Park live up to the hype? It perhaps didn’t quite hit the heights of three weeks ago, but it certainly provided more entertainment and drama, as Tom Ingram increased his lead at the top of the championship.

Race one: Josh Cook converted pole position into his first BTCC victory in cold, but dry conditions. Chris Smiley had taken the lead in the opening stages of the first lap, before Cook quickly regained the position and never looked back. Smiley defended stoutly throughout the race, but running the hard tyre always meant he was up against it, before finishing seventh. Tom Chilton spent most of the race going off the track, sometimes with help, and there was a worrying moment for Colin Turkington on lap 5 as a tap from Senna Proctor sent him spinning down the Craner Curves, where he was fortunate not to be collected by anyone else. Sam Tordoff produced a strong showing in the Ford Focus, before retiring from third towards the end, leaving Dan Cammish and Aiden Moffat to secure podium positions. Generally, it was good race with plenty of overtaking and many an excursion on the grass. Race rating: 7/10

Race two: A second victory of the season for Ingram and, again, he started outside the top ten to secure it. However, crucially for Ingram, he had the use of the prime tyre. Cammish took an early lead off the line with Moffat moving up to second. Smiley and Rob Collard also made good starts and moved up through the field in the opening laps. Around the midway point of the race, there was a fantastic battle for seventh involving seven cars before Brett Smith, who’d been seventh, lost out significantly to a long train of cars.Meanwhile, Smiley was making good ground on Cammish and took the lead, albeit for just a lap, before Ingram powered through for victory. Jack Goff continued his good start to the season in the final podium position. Race rating: 8/10

Race three: Rory Butcher was the lucky man to be drawn on pole and both he and Ash Sutton got away well, with Adam Morgan challenging too. However, a five car slide and collision at the Old Hairpin on the opening lap brought out the safety car until lap 7. Following the restart, Smiley pulled a robust move on Goff, but soon Morgan had found a way by Sutton for the lead and he never looked back. It was a move soon repeated by Cook on Sutton too. Towards the end Cook seriously challenged Morgan for the lead, but to no avail, and Moffat came home third ahead of Sutton to make it two Mercedes on the podium for the first time. Race rating: 7.5/10 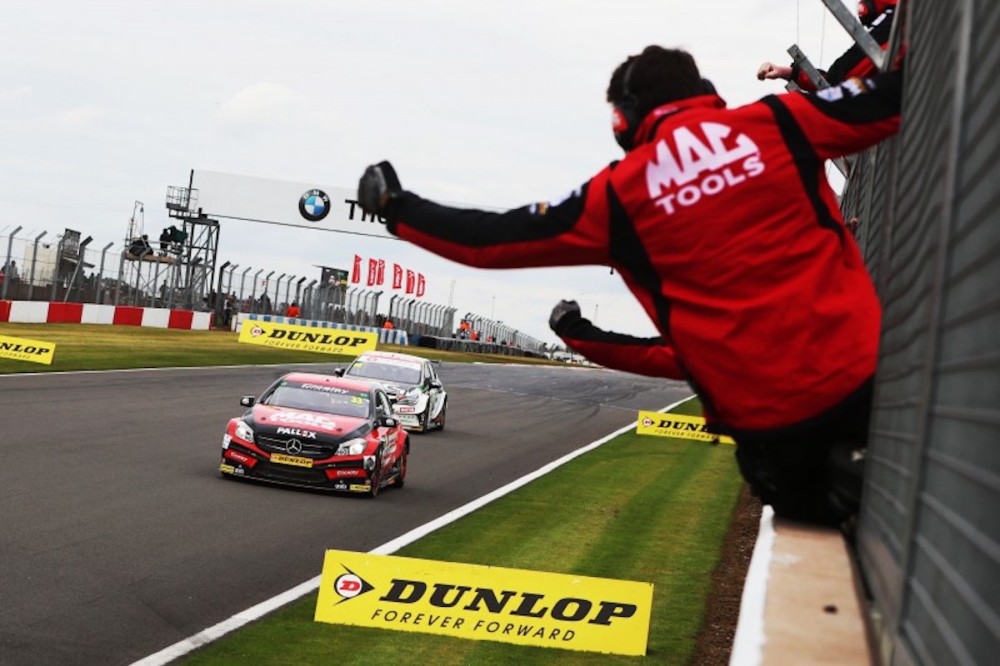 After the races concluded, Ingram will have been pleased to have increased his lead to seven points, albeit a small gap, especially at this stage of the season. Ingram has consistently shown over the last season or so that he is a serious contender and after a great start, questions have to be asked as to whether this could be his year.

Similarly, Morgan, who currently holds second in the standings, has been the long-time Mr Consistent in the championship without really having had a serious championship challenge. The Mercedes has got a few years of experience under its belt now and it has certainly improved over the years, but I still feel a championship challenge for Morgan would be a step too far.

Reigning champion, Ash Sutton, must be praised for being fifth so far in a car that it is clearly lacking straight line speed. The Subaru was the slowest car in the speed traps by 3mph at Donington and the rumoured change of engine supplier to Swindon from Mountune hasn’t really had the desired effect. It’s a serious worry considering how dominant he was last year. Teammates Jason Plato, who’s apparently cured his year-long understeer problem, and Josh Price have only managed a highest position of 18thbetween them. Plato’s a two-time champion with the highest number of wins in BTCC history, yet for love nor money he cannot get this car working. A third championship for Plato seems completely out of the question, but his greatest victory will be to get the car consistently in the top 10.

The qualifying top 10 was quite different to the norm as a wet qualifying mixed up the grid. If only it could be like that for every qualifying session as it certainly helped mix up the racing on Sunday as ‘the big guns’ tried to reach the front.

Something that we have become accustomed to is the effect of the different tyres, yet at Donington it could be argued that the difference was too much. The cars on the hard tyres struggled massively compared to those on the softer ones, almost to the point where it was ridiculous. Yes, the cold weather didn’t help, but if such trends continue, Alan Gow and his team must address the situation.

A trend that Power Maxed Racing will want to continue is a win at each circuit. I’m not sure many people would have had the PMR Astras down as winning two out of the first four races.  An incredible achievement that should be noted and it has put them in a good position for the rest of the season.

Championship standings after 6 races out of 30: