The temperatures were high at Oulton Park, but did the racing live up to the heat? In truth, the day got progressively better with each race and it culminated in a new leader of the championship come 6pm on Sunday. 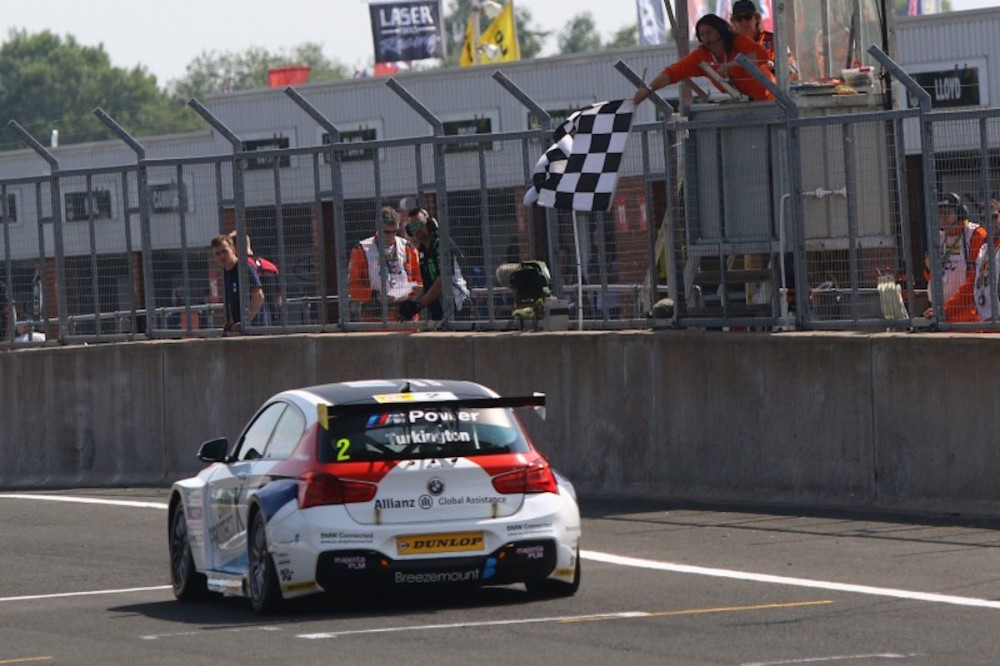 Saturday’s qualifying session brought a first ever, and very surprising, pole for Matt Simpson. Considering he was eighteenth in the standings going into the weekend and without even a BTCC podium, it was something of a shock to see him comfortably secure pole from Sam Tordoff, Tom Chilton, Andrew Jordan and Matt Neal. The championship top three after Thruxton struggled with the success ballast and Adam Morgan, Josh Cook and Tom Ingram couldn’t manage higher than seventeenth between them.

Race one: Simpson got away cleanly off the line, while Tordoff bogged down and was soon overtaken by Chilton. However, his position wasn’t secure and there was a good battle for the place with Tordoff and Jordan, which allowed Simpson to make a break for it. Just over the half way point, Jordan took third from Tordoff as Chilton held on, Colin Turkington started to move forward as he made his way to sixth and there was drama for Simpson as smoke started to appear from the front left area of his car. However, the smoke didn’t develop into a problem, despite continuing to appear intermittently, and Simpson secured his first ever BTCC win. Race rating: 5.5/10

Race two: Simpson’s joy didn’t last for too long as an engine issue ruled him out of the remainder of the day, meaning Chilton started on pole. It was an entertaining first lap as Chilton just held on to the lead, Turkington jumped to third and several cars found themselves off the track. A collision between Aiden Moffat and Dan Cammish found them sliding down the grass and Brett Smith was extremely fortunate not to wipe anyone out at the hairpin after being hit from behind before uncontrollably sliding along the grass before coming to rest on the apex of the corner.

Lap 5 found Tordoff struggling to stave off the large line of cars behind him and at the end of the lap at Lodge, Turkington took the lead from Chilton and Matt Neal made a move on Jordan for third.  Neal was soon on the back of Chilton and it didn’t take him long to secure second. Jack Goff and Rob Collard were involved in a great ding-dong for seventh and at the end of the race about seven cars crossed the line within a second as they tried to finish eighth. However, the major drama towards the end of the race was Tordoff’s front end turning into a fireball. Turkington managed to avoid all the dramas and secured a first and emotional win of the season after the passing of his mother by over five seconds. It was also a good result for Neal and a very heavy Focus of Chilton who completed the podium. Race rating: 6.5/10

Race three:  Rob Austin was the lucky man to be drawn on pole after finishing seventh in the previous race meaning the grid wasn’t completely mixed up. The final race of the day needed two attempts to get going. On the first start, Collard zoomed into the lead, but didn’t get much further as a massive crash behind him eventually brought out the red flag. A racing incident on the narrow grid saw the fast starting Mike Bushell squeeze between Tom Oliphant and Rory Butcher and as the gap closed, the inevitable happened and wiped out both BTC Norlin cars in the process.

On the second race start, it was a carbon copy for Collard while Jordan and Chilton made progress as James Cole went backwards. There were also a couple of punctures and drive through penalties suffered before it settled down.

On lap 6, Turkington and Goff both passed Cole for fourth and fifth in a similar situation to lap 2 when they passed Chilton. Neal and Ingram battled well on the next lap, before Neal was forced onto the grass after contact with Ingram and Morgan, who’d been pretty much anonymous for the day, took advantage. Austin, who’d been running well in second, suffered a broken differential and was forced to retire meaning the WSR trio of Collard, Jordan and Turkington came home for an impressive BMW 1-2-3. Ingram, meanwhile, managed to gain a couple of late positions as he secured a top six finish to keep his championship challenge on track. Race rating: 7.5/10

At the end of the day, there was a new leader of the championship after a couple of impressive race meetings, Turkington. Not only does he lead, but he leads by an impressive twelve points at this stage of the season, with his traditionally best and favourite round of Croft to come next. Obviously, you’d expect all of the BMWs to be strong next time out, but Turkington always seem to have the edge on Jordan and Collard, although his success ballast may play a part. There is a long way to go in the championship, but Turkington has certainly put himself into a strong position and he’s sure to be feeling pretty pleased with himself.

The leader going into the weekend, Morgan, certainly didn’t fair too well. Due to the nature of the circuit making overtaking difficult combined with the success ballast having a huge impact at Oulton, a poor qualifying was inevitable, which in turn put Morgan on the back foot for the weekend. He tried hard and made the best of a bad situation by finishing fifth in the final race after improving steadily race by race, a situation also copied by Ingram.

Cook, on the other hand, who went into the weekend a point behind weekend, didn’t make the steady progress like the other two, although he picked up a couple of points in the final race of the day. In all honesty, it was a hard weekend for the Power Maxed Astras as Senna Proctor only picked up a couple of points in the last race of the day too. The Astras have been fantastic this season so time will tell if this was a blip or whether they’ve been outperforming their ability and now reality has hit.

Meanwhile, it can hardly be said that the Subarus have been outperforming their ability this season; they’ve been an utter embarrassment. The decision to change engine supplier doesn’t look like it could have gone more wrong if they’d tried. Whether Jason Plato actually had a problem or not in the final race after being simply driven past by Moffat is up for debate, but he came straight into the pits after it.

Plato is now becoming as frustrated and angry as I’ve ever seen him in his long BTCC career and I can see public fireworks coming soon. In his interview with ITV, he was short and the rumblings of an explosion are clearly coming. The only reason this is a discussion point is the fact that a Subaru driver won the championship only twelve races ago, yet Ash Sutton is still outperforming the car in 13th, while Plato’s 30thand Josh Price is last. Will Subaru ever get it right this season? It’s hard to see. Even though the next track Croft favours rear wheel drive, will it help Subaru at the end of June? No chance.

Championship standings after 12 races out of 30: