The latest rounds of the British Touring Car Championship made history as, for the first time ever, each driver had to use the soft, medium and hard tyre across the three races. However, certainly not for the first time, the weekend’s racing ended in controversial circumstances with post-race penalties being applied.

The latest rounds of the British Touring Car Championship made history as, for the first time ever, each driver had to use the soft, medium and hard tyre across the three races. However, certainly not for the first time, the weekend’s racing ended in controversial circumstances with post-race penalties being applied.

Race one saw the top two get away cleanly as Chilton moved up to third. Matt Neal was soon out of luck, again, as Ollie Jackson smashed into his wheel while attempting an overtake, resulting in Neal pulling off. Ingram and Cammish played cat and mouse for a while, but Chilton was unfortunate to suffer a puncture on the fastest part of the circuit sending his Ford Focus into the barriers. That meant the top two had a comfortable gap for the remainder of the race, on the favourable soft tyre, from Tordoff.

Turkington, in fourth, had a relatively lonely race by BTCC standards as he was in no danger of being overtaken by Plato, nor was he close enough to challenge for the podium. Plato was busy defending from Andrew Jordan, but couldn’t keep him behind for the whole race, which then left Plato under pressure from his teammate, Rob Collard, although Plato secured his top six finish in the end. Race rating: 5/10. 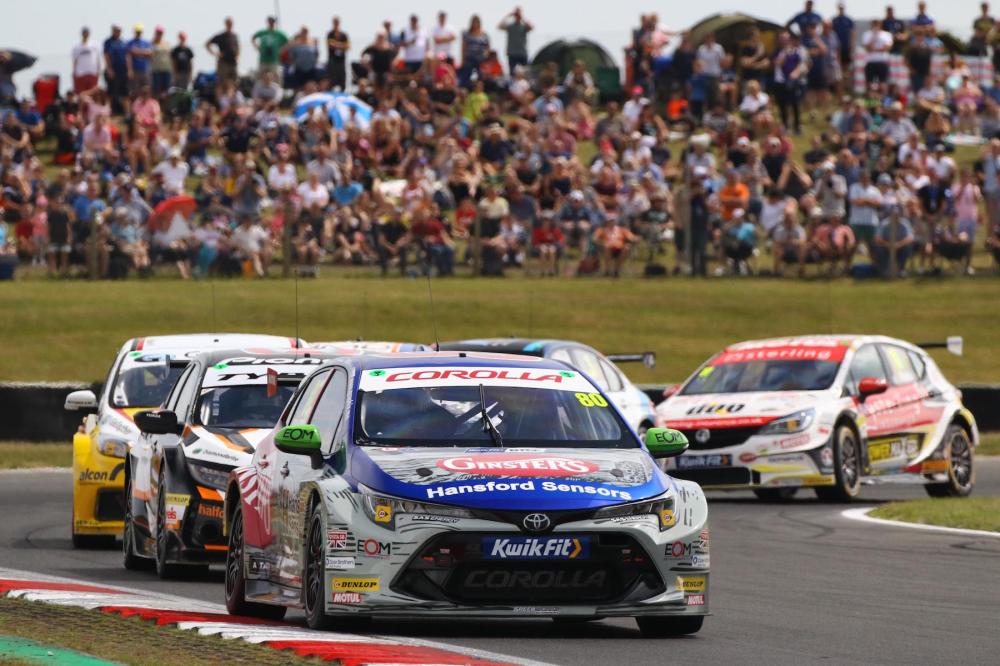 The opening laps of race two were fairly entertaining with several close battles across the grid. Turkington jumped to second after Cammish bogged down on the line and Jordan moved up too. He was soon third behind Turkington as he challenged Ingram for the lead, which then became a three-way battle. This continued for a couple of laps until Jordan made his move on the outside of Turkington. However, Turkington nudged the back of Ingram which allowed him to take the lead and Cammish moved into second as Jordan had nowhere to go. For the remainder of the lap, Ingram was hung out to dry and finished the lap down in eighth. However, an engine issue meant that his final position was 23rd– disappointing after such a promising opening half of the day.

Turkington made use of his soft tyres and vanished into the distance as Cammish held up Jordan, and the rest of the top six, for the rest of the race with some fantastic defensive driving. A notable mention must go to Jackson, in 4th, who secured his best result since the opening rounds last year. Race rating: 7.5/10.

Race three was arguably the race of the season, so far. To start, the top eight were reversed from race two, leaving Chris Smiley on pole from Ash Sutton, Plato and Tordoff. Although the top two initially got away well, a strong start from Plato saw him blast into the lead after a couple of corners, as all sorts of squabbling happened behind him.

Lap 5 brought Sutton’s first real attempt at passing Plato and as Sutton tried on the outside line, Plato used the racing line to push him wide which allowed Smiley back through into second, although it was only for a lap. Smiley lost out as Sutton regained second, but Hill and Rory Butcher also followed through.

Sutton’s next attempt on Plato was a ‘wow moment’ as the pair went side by side for a third of a lap giving each other racing room until Sutton was through. Plato, though, was having none of it and contact was made as he regained the lead.

Once again, it didn’t take long for Sutton to catch his nemesis and put him under pressure and this time he brought Butcher with him too. As the three sped down the Bentley Straight, they found themselves abreast at Brundle and three into one simply doesn’t go. As Butcher had the racing line, it forced Plato over and into Sutton, who was spun around. Plato was held up as a result, leaving Butcher with a huge lead with a couple of laps to go from the other beneficiaries of the incident, Josh Cook and Smiley. Plato was then in a battle with Collard again, this time Collard coming out on top as Plato finished fifth. Sutton was left to finish the race in a grumpy 20th. Race rating: 9.5/10. 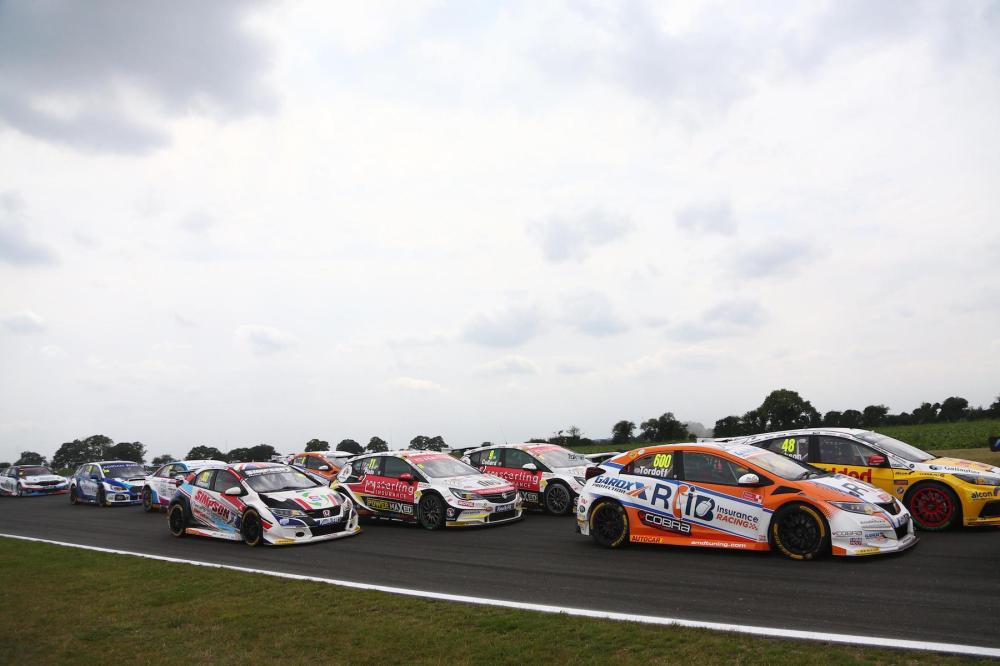 The insults and slanging match started immediately after the chequered flag with Sutton branding Plato “bloody brainless”, while we all know Plato can hold his own when faced with any sort of confrontation. There, of course, is the sub-plot of them being ex-teammates and Plato is clearly still aggrieved with Team BMR/Subaru following his exit at the end of last season.

Did Plato go too far? As much as it pains me to say it, in 2019, yes, he did. If we were talking about a race in the Super Touring era, we’d be simply talking about an amazing battle for victory, where eventually both of the contenders lost out after being too aggressive with each other. It’s a shame that we can’t have that sort of racing any more, but the rules are the rules. Was it entertaining though? Too right!

The stewards naturally upheld the rules of contact and punished Plato with a time penalty of 15 seconds post-race, leaving him 17thin the race result – scant reward for providing such drama.

Sutton, however, escaped with no punishment despite him hardly being whiter than white. Yes, Plato was more aggressive out of the pair, but Sutton left his mark on Plato’s car with a couple of touches too. Sutton also will do well to complain through the right channels in the future as he came across rather childish post-race saying how he was going to complain about three Plato incidents. Having said that, do we want to stop ITV conducting immediate post-race interviews while emotions are still raw and responses aren’t particularly considered? Definitely not! Again, it adds to the event spectacle.

The next event will be held at Thruxton, again, and the first visit was hardly a spectacle. Let’s hope that this time it’s more entertaining. Jordan relatively easily secured a double win in May, with Josh Cook taking the honours in the reverse grid race. With Turkington extending his lead slightly to 36 points over Jordan after Snetterton, Jordan will be desperate for a repeat performance.

Even with twelve races to go, the championship is clearly going to be fought out between Turkington and Jordan. Butcher, in third, is a massive 59 points behind Turkington and it would take the ultimate disaster for Turkington for him to be overtaken by Butcher, especially considering the BMW is the car to beat this season.

However, knowing Turkington’s traditional steady approach to races, there’s still a chance that a gung-ho approach from Jordan could reap massive rewards. Would Jordan consider it? Bet your bottom dollar he would.

Championship standings after 18 races out of 30: