The fourth weekend of the BTCC saw the teams head north of the border to Scotland for the meeting at Knockhill, completing a double header after last week’s meeting at Oulton Park. It was, once again, another great event for the leading championship duo of Ash Sutton and Colin Turkington.

Sutton was top during Saturday’s qualifying with Jake Hill second and Turkington third. On such a short lap, it was amazing that the cars with the most success ballast on board lined-up first and third. That’s a testament to their talent, the work of their teams, but crucially it showed the rear-wheel drive advantage at Knockhill.

That advantage helped Turkington take second as the lights went out for the opening race from Hill, but while he was busy defending the position, Sutton started to form a clear gap. Turkington looked like a cork in the bottle in the opening laps, but an early safety car following a big rear end hit into the barriers for Josh Cook, released the pressure.

After five laps to recover Cook’s car, Sutton and Turkington sped away at the front to have their own battle, while there were several battles down the field. Despite Turkington going deep at the end of each lap, he just couldn’t get a run on Sutton to challenge him significantly. A ballast free Hill remained third, despite a good battle in the top six, but the reality was that the top six starters were still in the top six at the end of the race.

The second race saw Sutton and Turkington swap their success ballast with a 12kg swing, although it made little difference. Tom Ingram took third on the opening lap, as the front duo got away well. However, the safety car was called for at the end of the first lap to rescue Cook from the gravel after he was tapped. It was such a shame for Cook and his team as they deserved a medal for making his car race-worthy after the substantial damage in the opening race.

After the safety car period, Turkington was all over Sutton with Ingram and Dan Cammish close too, but the front pair soon scampered down the road, again. However, their advantage was soon halted for a further five lap safety car period to recover Andy Neate’s Ford Focus.

It was a similar pattern after the re-start as Sutton and Turkington once again left the pack behind and despite Cammish’s best efforts, Ingram retained third. Sutton held on for victory as Turkington just couldn’t find a way to pass, despite his best efforts.  Thanks to the two safety car periods closing up the field, there was some excellent mid-field racing to be watched.

Senna Proctor was drawn as the reverse grid pole sitter after finishing 11th in the second race. Home favourite Rory Butcher joined him on the front row and made a better start to take the lead as several others fought behind him. However, for the second week running the race was red-flagged, although this time it was later re-started.

Ollie Jackson’s rear wheel locked up and as he took the chicane, he spun around and was collected by an unsighted Mike Bushell, who was then crashed into by Sam Osborne. With debris all over the track and the cars in the middle of the road, there was little option but to red flag the race.

After the cars lined-up in their original starting positions for the 20 lap re-started race, it was a case of déjà vu as Butcher once again made the better getaway and Tom Chilton moved up a couple of places on the opening lap to third. On the opening laps, Chris Smiley, who started third, held up several cars and once Tom Oliphant had made his way through, so did many others. At the front, Butcher flew off into the distance as it proved an easy win for him as Proctor couldn’t keep up.

The championship leaders made little progress with Turkington finishing 9th and Sutton, where he started, in 11th. Turkington did make and lose a couple of places during the race and Sutton tapped the back of Ingram several times, but to no avail as Ingram ultimately sandwiched the pair. It was a tense race, but rather processional.

At the end of the meeting, Sutton had managed to cut Turkington’s championship lead to just 10 points. Throughout the first two races, you never felt like Turkington had enough to overtake Sutton, despite the pair running practically bumper to bumper for 50-odd laps. The only thing to let him by would have been a Sutton mistake and Sutton is no easy picking.

The driving styles of the two are very different with Turkington being more measured and Sutton being all out attack. You would always favour Sutton to win a race because of it and, if he keeps it on the tarmac, you would favour him to win the championship as he’s more aggressive in trying to achieve his points. With high rewards, also comes high risks. Should Sutton try a move too far, he could easily find himself with damage or in the gravel, but that’s his style. 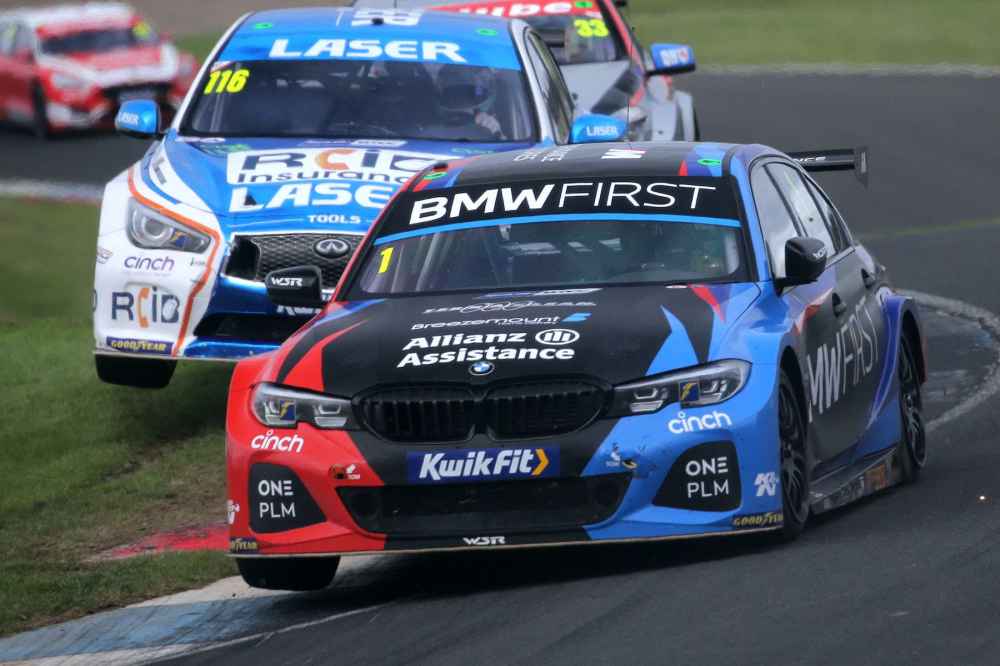 Turkington, meanwhile, will happily sit there banking points, but with Sutton in this kind of aggressive form, the pressure is on Turkington to step up even further, despite being the championship leader. The pair have the best cars on the grid, but will things be any clearer after Thruxton next time out?