Electric cars are nothing new, in fact they’ve been around as an idea since the middle of the 19th century. We’ve also had cars like the Nissan Leaf, Chevrolet/Vauxhall Volt/Ampera and Tesla Roadster available for some time. So why does today’s unveiling of the BMW i3 knock all of them into the gutter?

No, it isn’t conventionally attractive – the unkind might even call it ugly – with its squashed kidney front grille, asymmetric window line and two-tone colour scheme. But, when The Tame Geek and I discussed this earlier, we agreed that the i3 looks like a vehicle of the future, rather than a contemporary car made to look futuristic. Quite frankly, if you’re going to buy something that is meant to be changing the face of driving, would you at least want it to look different to everything else on the road?

The more I look at it, the more its shape and form start to make sense. There are also elements of existing cars in there; the blackened rear is oddly reminiscent of a MINI Clubman given a shot of anti-retro medicine, whilst the C-pillar segment looks vaguely Range Rover Evoque inspired in profile. It’s also worth considering that those wheels pictured above are 20 inches in diameter, yet are mounted with skinny tyres to minimise wind resistance.

But enough of the styling. What is it about this car which makes in so much more complete than any other electric-powered one on offer currently? In short, BMW seems to have considered everything which made electric cars a difficult proposition, and solved them.

Take for instance the regular problem of electric cars being too heavy due to the weight of the battery packs. By using a painstakingly developed carbon fibre passenger cell, BMW has managed to reduce the total weight of the i3 to less than 1200 kgs; or about the same as a regular supermini. For comparison, a Nissan Leaf tips the scales at almost 1500 kgs, whilst the Vauxhall Ampera notches up close to 1600 kgs. 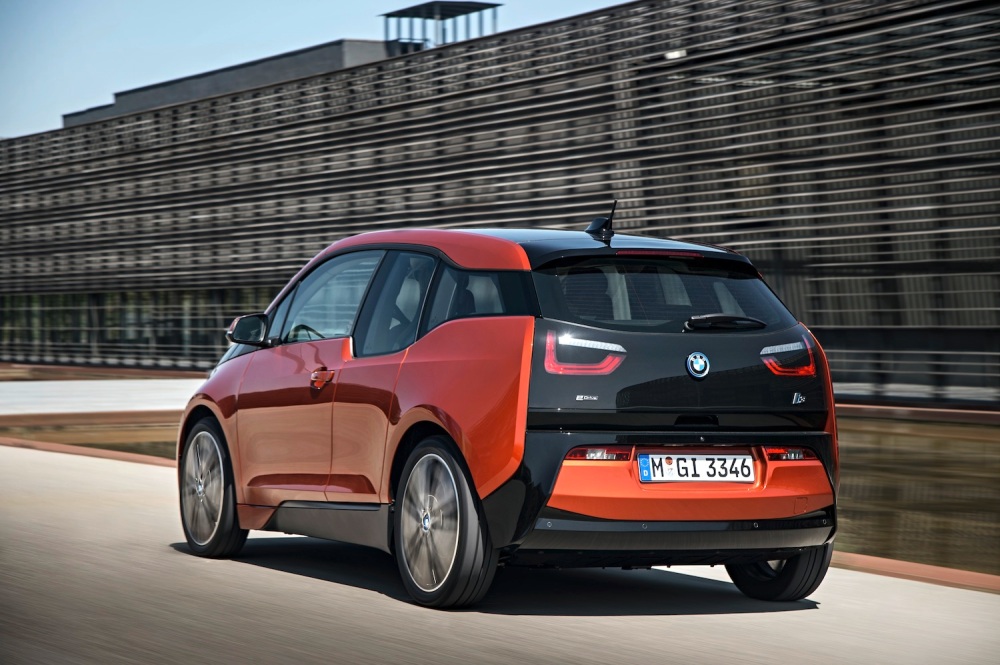 Anxiety about the range of electric vehicles is another issue which often sticks in the mind of potential buyers despite, in the UK at least, average daily journeys being no greater than 25 miles. In standard all-electric format, the i3 will achieve 80-100 miles once fully charged – so more than enough for most. Charging the i3 is said to take less than three hours to fill 80% of the battery when connected to the mains. Even the home charging station looks quite cool, for what is essentially a giant plug socket:

However, should you be inclined to take your i3 for longer jaunts, then you can opt for the Range-Extender model which packs a two-cylinder 650 cc petrol engine acting as a generator. Using its 34 bhp to charge the batteries lengthens that range to 180 miles on a full tank of fuel.

But if you need to go further still, or are just clamouring to get back behind the wheel of an internal combustion engine, BMW will let you accrue points to exchange for the use of regular car. This level of thinking is what makes the i3, and the whole electric car ownership concept, realistic.

So why, as car enthusiasts, should we be getting excited about the idea of an electric car? Well, for a start, the 170 hp and instantaneous 185 lb-ft of torque launch it to 60 mph in 7.2 seconds. That’s as quick as a 1-Series 120d, but done in silence. The i3 also retains that classic BMW rear wheel drive layout, and a 50:50 weight distribution, with most of it low down in the chassis. Whether this translates into the “Ultimate Driving Machine” on the road remains to be seen, but it sets a high expectation at least that fun might not be forgotten.

Although I’m sure the bundle of apps available to connect your i3 to your iPhone will be a bonus, the most important selling point is the price. Starting at £25,680 for the regular i3, rising to £28,830 for the Range Extender model, this comfortably undercuts the Vauxhall Ampera/Chevrolet Volt. There are also none of the monthly battery rentals typically associated with electric cars either. Given the amount of technology packed into this car, EngageSportMode would hazard a guess that BMW will be losing money on the i3, but investing in a long-term strategy for success in this market.

In short, the i3 is a game changer for the electric vehicle market and the car enthusiast in hopefully bringing the two together. Although the proof will be in the driving, we are potentially looking at the first battery-powered car to combine exciting driving dynamics, an upmarket image and competitive pricing in one package. That is surely reason enough to be excited about the future.