The second piece in BMW’s hybrid strategy has been fully unveiled at the Frankfurt Motor Show, with prices and specifications for the futuristic i8 now confirmed. So just what do you get for almost £100,000? 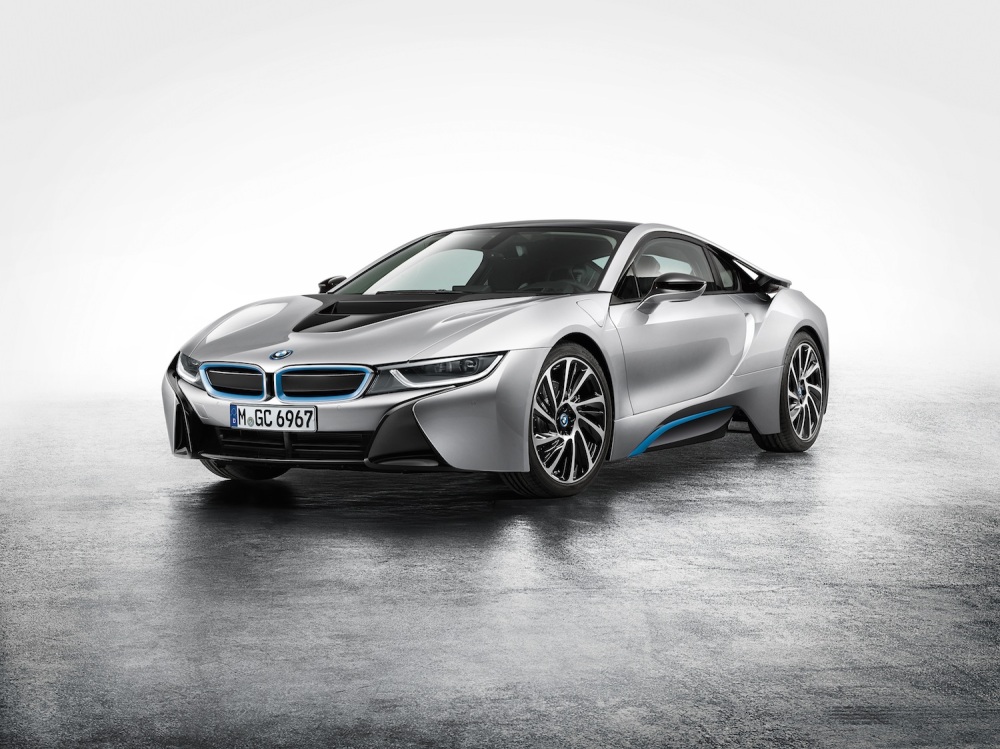 EngageSportMode is already a fan of the coupe’s little brother, the i3, praising its futuristic design and cleverly designed ownership experience. But, whilst the i3 is intended to be an everyday hatchback, the i8 aims to be a pure sportscar – just one with a conscience. 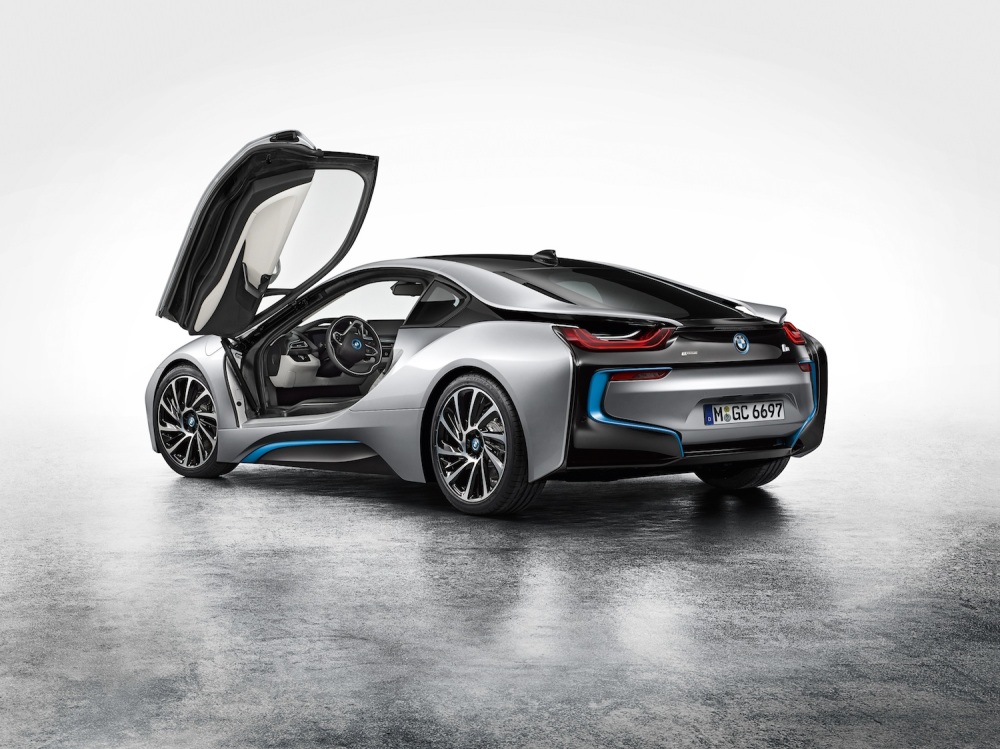 Unlike the i3, which polarised opinion with its ‘challenging’ aesthetics, there’s no denying the i8 is a real looker. The basic form has been known for a while in various prototypes and test-mules spotted around the world, but it is the little details which make the i8 truly stunning.

EngageSportMode’s favourite feature is the way the roof pillars float to extend over the rear lights, clearly aimed at helping air flow over the rear end but also emphasising the wheel arches. There are also hints of BMW’s first supercar, the M1 from the late seventies, in the shape of the prominent ‘V’ on the bonnet along with the side window-line. It’s probably worth noting that the M1 never had dihedral doors like the i8, or aerodynamically designed 20″ alloy wheels though. 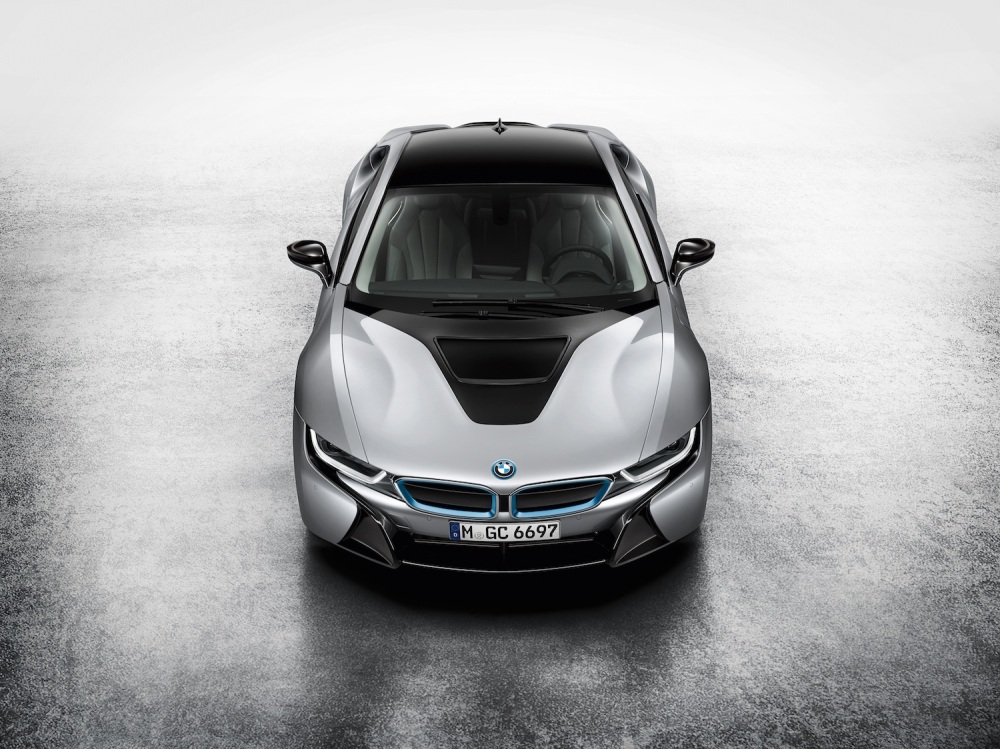 Underneath its carbon fibre reinforced plastic bodywork, the i8 is all modern. Primary power, to the rear wheels, comes from a highly tuned 3-cylinder petrol turbo engine that produces 231 bhp from just 1.5 litres – the highest output per litre of any BMW road car motor. Torque from the internal combustion engine is equally chunky, twisting with over 230 lbs-ft at 3,700 rpm, fed through a six-speed automatic gearbox. Whilst in isolation such a high output engine might be impressive, the i8 goes further in mating it with an electric motor.

Making 131 bhp in its own right, the hybrid electric motor drives the front wheels through a separate two-speed gearbox. Meaning that, yes, the i8 is effectively four-wheel drive. Charge from the lithium-ion battery is sufficient to let the i8 hit 75 mph on electricity alone (!) or drive for 22 miles without using a drop of petrol. Like the smaller i3, the i8 can be charged at home from a BMW approved wall-mounted box, that allows 80% power to be replenished in just 2 hours.

With BMW touting the i8 as a supercar of the future, it’s worth just recapping those performance figures – most probably obtained with the car in sport mode which combines the electric and petrol powerplants together to give 362 bhp and 420 lb-ft. Equally impressive is the  kerb weight of just 1,490 kg, despite the i8 being a sizeable 2+2 coupe full of batteries and motors – testimony to the quality of the weight-saving lengths BMW has gone to.

This combination allows the spring to 62 mph in only 4.4 seconds, with a top speed of 155 mph. The potential to embarrass Audi R8 and Porsche 911 drivers at the traffic lights is genuinely huge in the i8. However, the i8 isn’t just a straight-line dragster. Power is sent to the rear wheels on the entrance to corners to improve turn in, with the bias reduced on exit allowing it to slingshot out of bends. Variable Damper Control and Electric Power Steering complete the chassis dynamics, along with a veritable raft of stability and traction control systems. 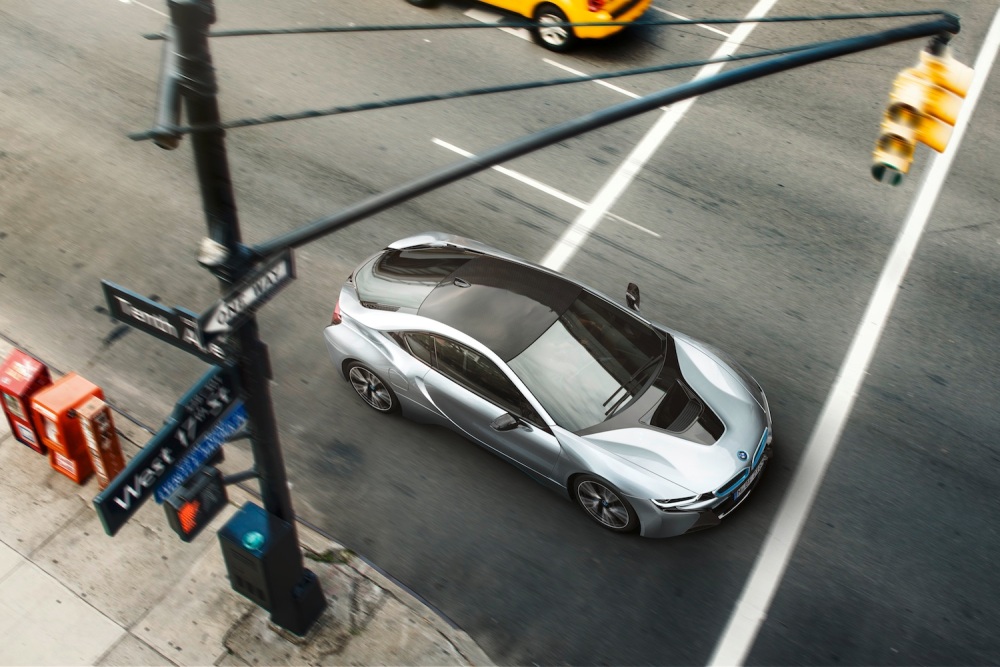 Inside the lightweight CRFP passenger cell is relatively more conventional, with contrasting leather trim covering the seats, centre console and most of the dashboard. More futuristic is the fully digital instrument display, which adapts based on which of the driving modes (Comfort, Eco Pro, Sport or eDrive) is selected. Sport mode brings traditional looking dials, whilst Eco Pro adds an efficiency meter to encourage smooth driving.

Given the £99,845 starting price the i8’s standard specification is suitably opulent. A Head-Up display can show speed limits and status alerts on the windscreen in the driver’s direct view, whilst the navigation system works to ensure the car’s efficiency is optimised for the road being driven on. A rear view camera, parking sensors and full LED lights, both front and rear, add to the techno extravaganza.

Make no mistake, this car is not the saviour to our energy worries. At just shy of £100k it exists to be a special plaything for just a select few. But it does mean that we, as enthusiasts, can at least rest assured that whatever the powertrain used performance cars can still be made. EngageSportMode’s only major gripe is that the four colour options don’t include Valencia Orange as used on the 1M Coupe and i3. We imagine that, if you throw enough money at BMW, it could still happen though.

Order books open this month, with the first UK deliveries expected in July 2014 – meaning the future is actually only around ten months away!