Although we already know the main outcome from last weekend’s final round of the 2013 British Touring Car Championship, there was still plenty of action to be covered by our correspondent. 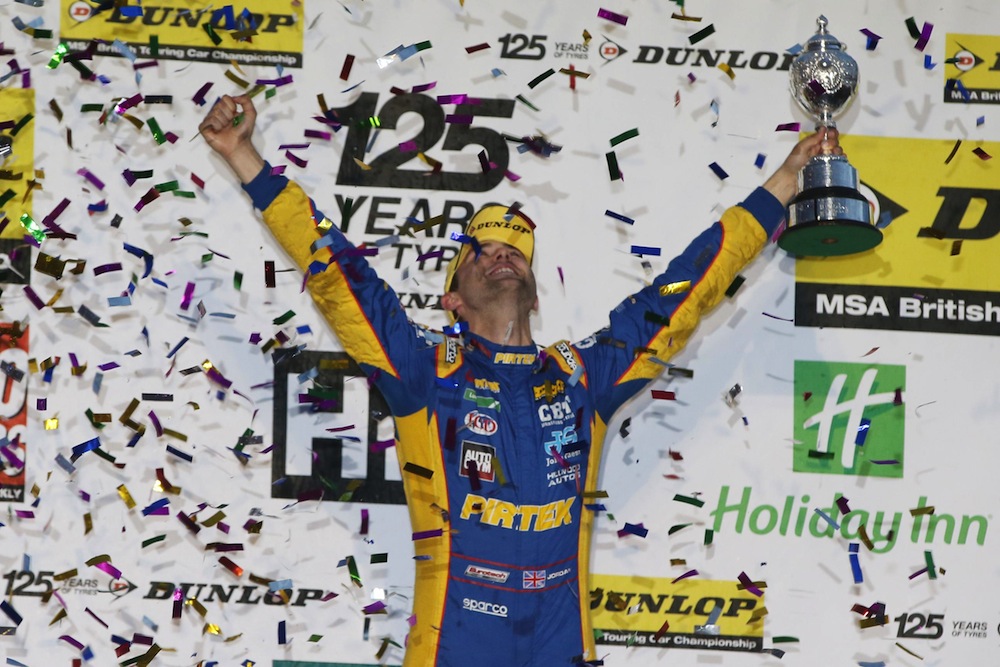 Andrew Jordan secured his first BTCC Drivers’ Title after another pulsating weekend of action. However, it wasn’t as easy as I’d previously predicted as he went in to the final race still needing a good points finish to clinch the trophy.

The weekend’s major talking points started in FP1, where Airwaves Racing driver Aron Smith had a massive smash. Smith was taking evasive action from the cars in front of him before he found the barrier, turning over his Focus. Later on in qualifying, Matt Neal also found the barrier with a heavy hit. Neal put a wheel wide on the exit of Paddock Hill Bend and spun across the track before going head-on into the barrier. The crash left Neal visibly shaken and sore from the on-board shots and it will have not helped his broken finger one jot.

However, one man with no such problems in qualifying was Jason Plato, who led home yet another MG 1-2 from Sam Tordoff. Jordan had a positive qualifying result taking third from Gordon Shedden, Adam Morgan and Colin Turkington. The atrocious weather conditions that met the teams on Sunday morning meant that Race One was delayed by around 25 minutes.

When the race eventually got underway, Plato and Tordoff made excellent starts off the line and held position initially, before Shedden soon took Tordoff for second. The ever unfortunate Turkington was slightly tagged from behind by one of his teammates, Rob Collard, which sent him into a spin, where he was duly collected head-on by his other teammate, Nick Foster. Turkington’s now probably lost count of the amount of times he’s been tagged this season, I certainly have. Lap 1 also saw Neal make good progress through the field following his Saturday incident, but Frank Wrathall was once again out.

Lap 3 saw Neal continue his progress as he was chasing Morgan for seventh, but the main talking point from the lap was Rob Austin’s foray into the gravel trap and barriers at Paddock Hill Bend. With Austin’s car in a dangerous position, the safety car was duly called for and remained on track for a couple of laps. Plato made an excellent getaway as the race re-started, although I was worried the safety car was going to come straight back out when Warren Scott smashed his Passat into the barrier half way around the lap. Jake Hill, using the second Audi from Rob Austin Racing instead of Will Bratt, was having a great first NGTC race until his 10th place was taken from him after he was tagged by Ollie Jackson at Graham Hill Bend.

The race finally started to settle down a little with Tom Onslow-Cole getting ahead of Jordan after he went wide at Graham Hill Bend, a corner he struggled at all race day, and Neal found a way by Collard. Lap 11 saw the already crowned Jack Sears Trophy champion Lea Wood spin at Paddock Hill Bend allowing Shaun Hollamby, back in yes that Golf, to lead the class where he stayed until the chequered flag. I can’t believe the Golf found some glory in its swansong. The following lap saw Aiden Moffat hit the tyres, but he managed to recover.

As the race entered the latter stages, Plato had built up a sizeable gap back to Shedden, but Jordan was still pushing Onslow-Cole hard for the fourth position he had taken off him earlier. One of the other Focuses was under immense pressure too, but from another Focus as Mat Jackson found Smith hot on his heels, with the pair finally crossing the line with only half a second between them in ninth and tenth.

Race Two saw all the damaged cars from the first race back on the starting grid, as Plato once again made a clean getaway, despite appearing to creep forwards before the lights went out. Shedden made a poor start, with Tordoff taking second from him, before he had a massive sideways moment at Paddock Hill Bend, although he somehow kept the car going. All of the early action allowed Onslow-Cole to take third. 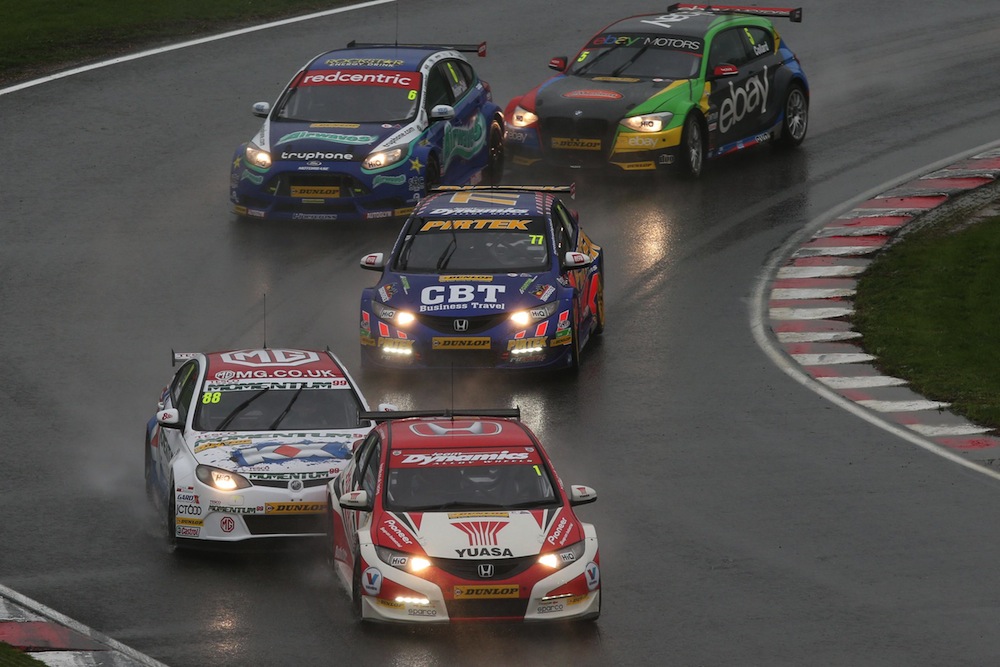 The second lap really put the cat amongst the pigeons, as they say. Jordan, looking even more a certain winner of the championship after the first race, suffered his first DNF of the season and what a time for it to happen! Smith tapped the back of Collard, who in turn hit Neal and then he hit the rear of Jordan’s car. It was immediately clear that Jordan couldn’t continue as his back wheel and suspension were mashed and after a spin, he did manage to limp back to the pits to give his Pirtek team as much time as possible to fix the car for the final race, for which he would now start last.

As the drivers started lap 4, Plato was in the lead from Tordoff and a sizeable gap was emerging to Jackson, Morgan and TOC as the starting order had changed somewhat.  Lap 6 saw all the Focuses running together in third, fourth and fifth although Dave Newsham soon muscled his way into the battle and TOC was the man to fall backwards. Morgan and Shedden were one of the many close battles being seen throughout the field, a battle Shedden eventually won for seventh place although he did also try for sixth, but he found Jack Goff in imperious form.

The final laps saw Austin retire his car, Sherman, once again and Neal have a serious problem as he needed to pull off with yet another fire for the Honda Civic. Neal made a sharp exit with his broken finger and quickly had the bonnet up to let the marshals and the fire extinguishers in. His championship chances were now well and truly over. One man who remained in the hunt, and who was now Jordan’s closest rival, was Plato after another victory despite Tordoff’s late pressure. Jackson took another podium for the ever improving Airwaves Racing Team, with an excellent fourth for Newsham, from Smith, Goff and Shedden. Wood added another S2000 cup to his already impressive collection.

Series chief Alan Gow chose ball seven for the reverse grid, which meant that Shedden would be on pole. Shedden still had a chance of retaining his title if he won and Jordan finished well down the order, although if Plato was able to achieve a third victory of the day, Jordan would have needed to reach eighth to secure his first title.

Race Three started with Shedden making a clean start off the line from Goff and Smith, although the first notable drama happened as the cars approached Graham Hill Bend as Tordoff was spat out of the train and into the barriers. He did manage to continue down the order, despite what looked like a race-ending impact. Jordan had made a lightning start from the back, as you would have expected, and he continued to progress throughout the second lap.

Lap 3 saw Shedden lead from Goff, Smith and Jackson, but the top two were already starting to eke out a sizeable gap, which continued to grow as the race developed. By the fifth lap, Goff was seriously challenging Shedden for the lead with several plausible attempts to take it over the next couple of laps, although they ultimately were unsuccessful. It was excellent to see a young racer challenge the reigning champion so intensely.

Plato was not showing his form of the previous two races as he started to slide down the order, but Jordan was making his way up the grid and by lap 8 he was tenth. It was enough to secure the championship although his task, I feel, was made a little easier by the other drivers showing him plenty of respect. Plato’s demise was completed on lap 11 as he was now racing in tenth, where he ultimately finished the final race of the season. Turkington had found his way up to fifth, before finding his way by Smith for fourth.

The final race of the season wasn’t particularly the best as the cars did seem fairly processional with the odd exception. However, Shedden managed to finish the season with a victory from the impressive Goff, with Jackson once again taking the final podium position for the second consecutive race. Turkington finished his return season with a fourth position, ahead of Smith and Newsham. It didn’t really matter about who was in the top six positions, it was all about who finished ninth. Andrew Jordan took ninth and with that, his first BTCC driver championship. The final honours of the season went to Wood, who completed his ninth victory in the Jack Sears Trophy out of the last ten races.

As the cars arrived back in the pits, the celebrations began with a clearly emotional Jordan taking the rich and deserved applause. The facts from the season were quite simple and the most consistent driver won the title.

Here is the usual round-up of the teams:

A stronger weekend for Shedden than Neal, but once again a decent performance.

A super weekend for MG, if only they’d been like this all season!

Not the best of weekends for eBay Motors and once again Turkington was the strongest of their drivers.

A great weekend for Airwaves Racing, their strongest weekend of the season perhaps?

No Jeff Smith, but this weekend was all about Jordan.

Again, a good weekend for Adam Morgan. He’s really impressed me this season.

Not the best of weekends for Austin, but the signs were encouraging from Hill, who, dare I say it performed better than Will Bratt in his three races this weekend than Bratt all season.

Warren Scott had a shocker, he retired in all 3 races.

Jack Goff was fantastic this weekend, Tom Barley less so.

Neate couldn’t race this weekend due to pneumonia.

Nye was absent and Welch didn’t have the best of times.

Another poor weekend for Griffin with 2 retirements and a 19th.

Another brace of wins for Lea Wood as the season finished.

Joe Girling has left the championship.

Return of the Golf, well for one race! Hollamby gave the Golf a final victory in the JST in what should be its final rounds. Now for the scrap heap, PLEASE.

So that’s it, season over. It’s been a season full of the usual trials and tribulations and I plan to analyse the season in further detail over the next couple of weeks. Keep checking ESM for my stat attacks and further analysis. Thanks for reading this season!

That may be the end of the season, but it isn’t the end of ESM’s BTCC coverage for 2013, with more to come from our BTCC Correspondent.