It’s already been leaked and teased within an inch of its life, but the all new 2014 Audi TT is finally here. Although only just revealed to the crowds at the Geneva Motor Show, we’ve already got the pics and details for you right here. 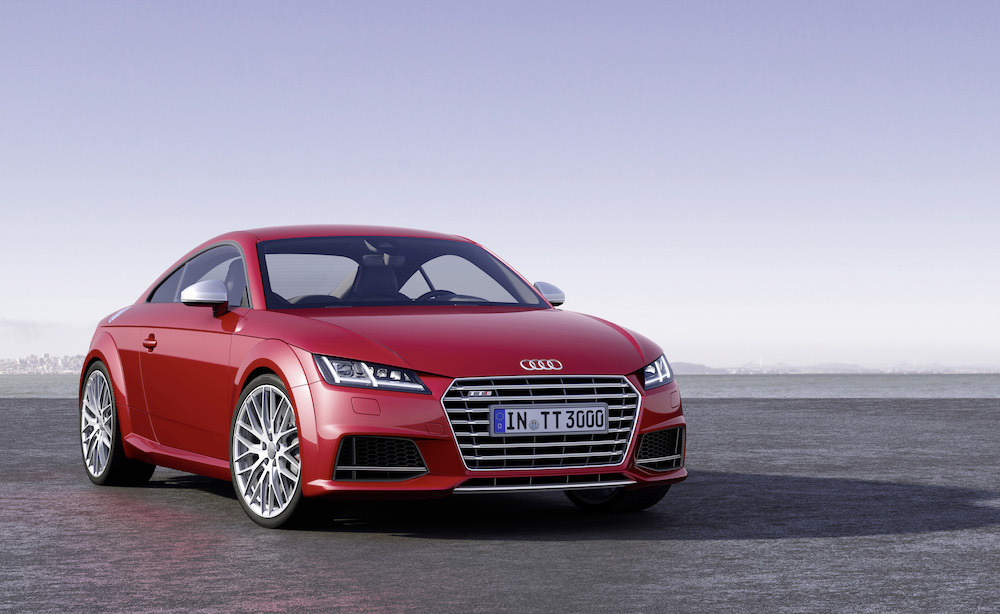 Believe us, that is the all new Audi TT. It might look an awful lot like the old one, but Audi assures us that under the skin it has completely refreshed its ever popular coupé. The more you look at the details, the more it becomes obvious that as familiar as it may seem, this third-generation of the TT has subtly changed in a number of ways.

Audi claims to have used the first-generation TT, launched way back in 1998, as its starting point for the latest version. But it has brought it bang up to date with details like the chrome single frame grille, and four-ring emblem mounted R8-style on the bonnet. Xenon headlights come fitted as standard, but Audi is making much noise about the optional LED items first featured on the A8 saloon. No news on whether Laser items will be available yet. Perhaps most prominent is the ‘v-shape’ of the bonnet which creates an aggressive front-end when combined with the items above. New colours also feature with Tango Red (shown here) and Nano Grey available across the range, with Sepang Blue and Panther Black crystal-effect optional on the TTS.

Length and height remain almost identical to the previous generation, with wheelbase increasing by 37mm meaning the front and rear overhangs are shortened, but bootspace increases by a nominal 13 litres. The trademark aluminium look fuel cap remains exposed on the flank, whilst the glasshouse when viewed from the side is very reminiscent of the original TT. At the rear things are more like the second-generation car, with a kicked up tail hiding a spoiler which deploys at 75 mph. Quad exhaust tailpipes come as standard on the TTS, with the regular TT sticking with just two oval pipes.

Weight has been reduced through the use of aluminium in the doors, bonnet, boot lid and roof sections which sees an overall 50 kg reduction compared to the outgoing model. Hardly dramatic, but it does mean the 2.0 TFSI version weighs in at only 1,230 kg. So if the outside has seen a subtle evolution of previous ideas, then the big news must be on the inside, right? Correct.

Look at the photos of the new TT and take in just how uncluttered and clean the dashboard and centre console looks. In an age where big media screens and buttons dominate, this is a minimalist interior. The surprise is the use of a single TFT screen to create, what Audi calls, a ‘virtual cockpit’ in front of the driver. As such, both regular instruments and multimedia settings are controlled from one screen meaning the centre console only requires one main row of buttons. Oh, and if you’re wondering how the air-conditioning works, look again at those round vents – the controls are in the centre of them!

Engines choices at launch consist of two flavours of 2.0 litre TFSI petrol, or a 2.0 litre TDI diesel, all with stop/start technology. The base 2.0 TFSI petrol come with 230 PS (227 bhp) and 272 lb-ft of torque, whilst the range-topping TTS uses the same engine but with a higher output of 310 PS (306 bhp) and 280 lb-ft. Performance for the base 2.0 TFSI sees 0-62 mph in 6.0 seconds with the standard six-speed manual gearbox and front wheel drive setup, with the time dropping to 5.7 seconds in the quattro enabled S tronic dual-clutch version. Top speed for both variants is an electronically limited 155 mph. The punchy TTS sees the 0-62 mph sprint taking just 4.7 seconds with the same 155 mph limited top end.

If you want diesel, the 2.0 TDI majors on efficiency with a rather impressive official 67.2 mpg based on the combined cycle. This equates to low CO2 emissions of 110 g/km, yet the TDI model still manages 0-62 mph in 7.2 seconds and on to a top speed of 146 mph. With the increased torque of the petrol TT offerings, the efficiency of the TDI remains its reason for existence rather than sheer twist. By comparison, the base 2.0 TFSI can only manage a combined mpg of 41.5.

The quattro drivetrain, where equipped, has also been tuned to offer greater efficiency with the ability to temporarily shut itself down when ‘efficiency’ mode is chosen from the Drive Select options. Obviously, if traction dictates, the quattro system will swing back into action before torque is actually needed to be distributed. Clever stuff. Audi promises that the new TT will be more fun to drive than before, with the ‘dynamic’ option of the Drive Select system sending increased torque to the rear of quattro equipped cars quicker than before.

In conclusion, what do we think? Well, the new TT is hardly ground-breaking on the outside but the subtle styling advancements recreate fond memories of the first-generation model, but with a modern twist. We also love the minimalist, uncluttered, interior with the ‘virtual cockpit’ setup and the promise of greater driving pleasure is interesting. Hopefully Audi will deliver on the latter, and not produce just another firmly dampened and uncommunicative coupé.

We’ll learn more about exact UK pricing and specification in time, with first deliveries expected before the end of 2014. For more info, go here.