We’ve mentioned Audi’s recent fascination with laser lights before, seeing them fitted to its R18 e-tron quattro Le Mans racer and also the Sport quattro concept. Finally, after all that teasing, you can now have the chance to use a car on the road with actual frickin’ laser beams for headlights.

Based on the already rather special R8 V10 Plus, yes the one from that advert, the LMX gains an extra 20 bhp and a veritable banquet of carbon fibre, in addition to those obvious special headlights. As a limited edition of just 99 cars worldwide, the R8 LMX promises to be somewhat rarer than yesterday’s BMW M5 special edition.

But then, at a list price of £160,025 on the road in the UK, it’s hardly likely to be on everyone’s shopping list. In fact the LMX represents a premium of over £30,000 compared to the S-tronic gearbox equipped V10 Plus. Sharing the same 5.2 litre V10 engine, and seven-speed DSG gearbox, as the V10 Plus that additional 20 bhp drops 0.1 of a second from the 0-62 mph time whilst adding 1 whole mph to the top speed in the LMX. Lots of money for a tiny performance increment. If you’re bothered, fuel consumption stays the same at 21.9mpg combined with C02 emissions of 299g/km.

But, Audi has seen fit to throw the options list at the R8 LMX, packing in lots of things that usually appear as tempting but expensive choices on the configurator website. The standard Ara Blue crystal effect paintwork, specially developed to mimic the phosphor blue converter in the laser unit, can’t be cheap. Oh, and if you’re not keen on the blue paint, Audi promises you can have it in matt Daytona Grey or metallic Mythos Black. However, we’d be inclined to stick with the blue, what with it actually meaning something. 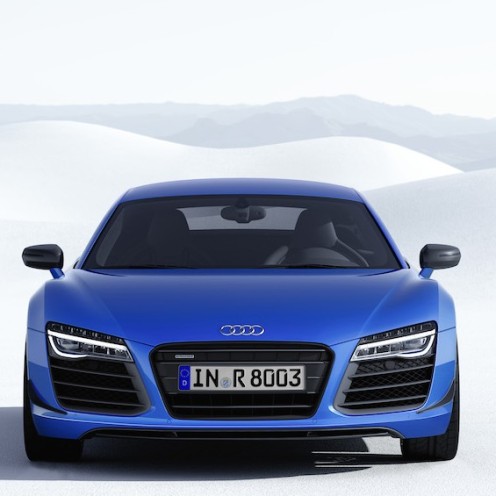 Also probably not cheap are the unique 20″ alloy wheels, or carbon fibre which finds it way onto the front lip spoiler, dive plane lips, engine compartment cover, wing mirror covers, sideblades and the diffuser. There’s also that rather large rear spoiler that’s, inevitably, also made from carbon fibre. Titanium grey provides the colour for the front and rear grilles, whilst the exhaust pipes are finished in gloss black. 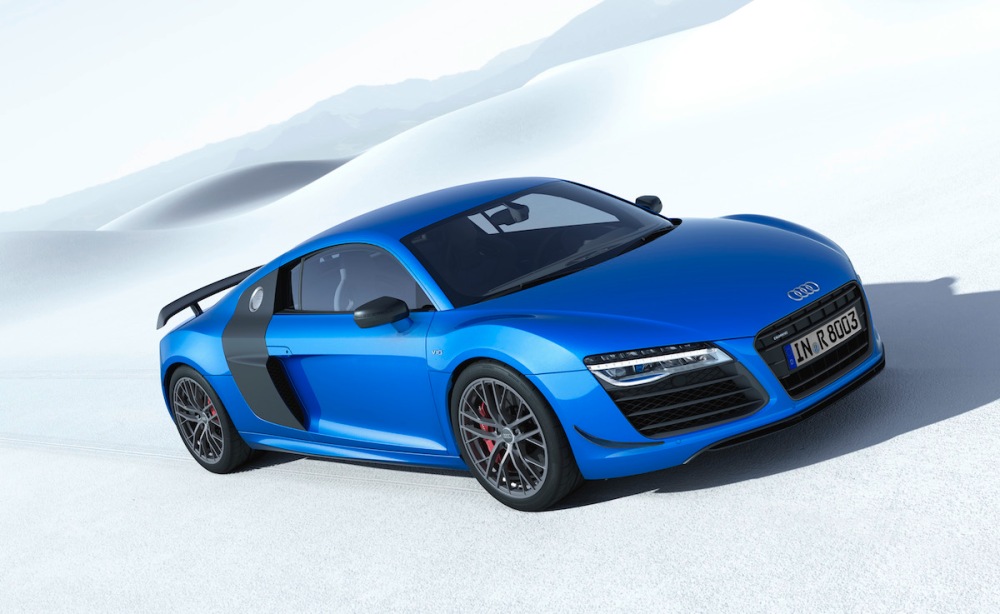 Aside from all the trinkets and carbon bits, the most important thing here are obviously the laser beam headlights. The R8 LMX is the first production road car to be fitted with them – kind of a big deal then. It’s worth pointing out that the lasers only feature as a spotlight element as part of the main beam setting. Low beam lighting is left to the regular LED matrix lighting (already available on the R8), as is main beam below 37mph. Once above that speed, with main beam enabled, the laser spotlights will kick in to provide lighting that doubles the range of the regular LED headlights.

Thankfully, the LMX comes fitted with a camera-based sensor system which detects over road users and adjusts the light pattern to avoid dazzling them. Lets just hope that, when laser lighting inevitably makes its way to an Audi A4, the system will detect being inches away from the car in front during motorway driving…

Realistically the R8 LMX is a halo model, showing off a fancy new technology that isn’t cost-effective enough for normal motoring. However, you have to admire Audi’s commitment to bring Le Mans inspired innovation to a road car setting. Laser lighting has come directly from the R18 e-tron quattro prototype to find it’s way to a car you can drive on the street; that’s got to be worth something at least.

Should you be lucky enough to be in a position to want, and afford one, the R8 LMX will go on sale in the UK after it’s debut at the 2014 Goodwood Festival of Speed on the 26th-29th June. It just means you’ll be waiting for those dark winter nights to test out your special headlights.