The first race weekend in the 2017 British Touring Car Championship failed to excite our correspondent. What did he take away from Donington Park?

After a rather tepid affair at Brands Hatch last time out, the action and drama heated up at Donington Park on a weekend marred by the horrific injuries suffered by Billy Monger in the F4 support race. Apart from learning there was more brilliance shown from the marshals and medical services at the track, what else did we learn?

It is perhaps time to stop referring to Tom Ingram, Aiden Moffat, Jack Goff and Josh Cook et al. as ‘young guns’ and ‘rookies’ despite their age and experience after yet more sterling efforts at Donington. In fact, Ingram leads the championship, as his outstanding displays from Brands Hatch continued. Ingram was naturally helped in achieving this by Gordon Shedden’s failed ride height in the final race where he’d crossed the line first. However, Ingram followed up a strong qualifying with a brace of fifth place finishes and another win. He is deservedly top of the ladder and it is a great achievement for Speedworks and Ingram.

When you consider that Ingram is already 82 points ahead of Jason Plato, you would suggest the he will be, or is, a serious title challenger, but what is happening to Plato? His new teammate, Ash Sutton, has outperformed him so far and achieved two podiums at Donington, and these were achieved after starting at the back in the opening race after his qualifying pole lap was discounted. Rarely has Plato been uncompetitive in his BTCC career, but this season has been quite disastrous so far, albeit six races in and with a DNS. A serious championship contender can perhaps afford one bad event per season, yet alone two when the competition is as tough as this season’s. Although, I didn’t publicly air my predictions for the season, I did fancy Plato in what looked like a strong Subaru last season. Will he win the championship? No.

Similarly, Moffat won’t win the championship either, but we did learn that his consistent improvement over the last couple of years has been finally rewarded with a maiden win. It was a great effort from the Scot and I’m sure that it will be the first of many in what promises to be an excellent career. He seems a genuine chap, who just wants to race and not be bothered by complaining about boost levels and such like as some of the field mix themselves with. 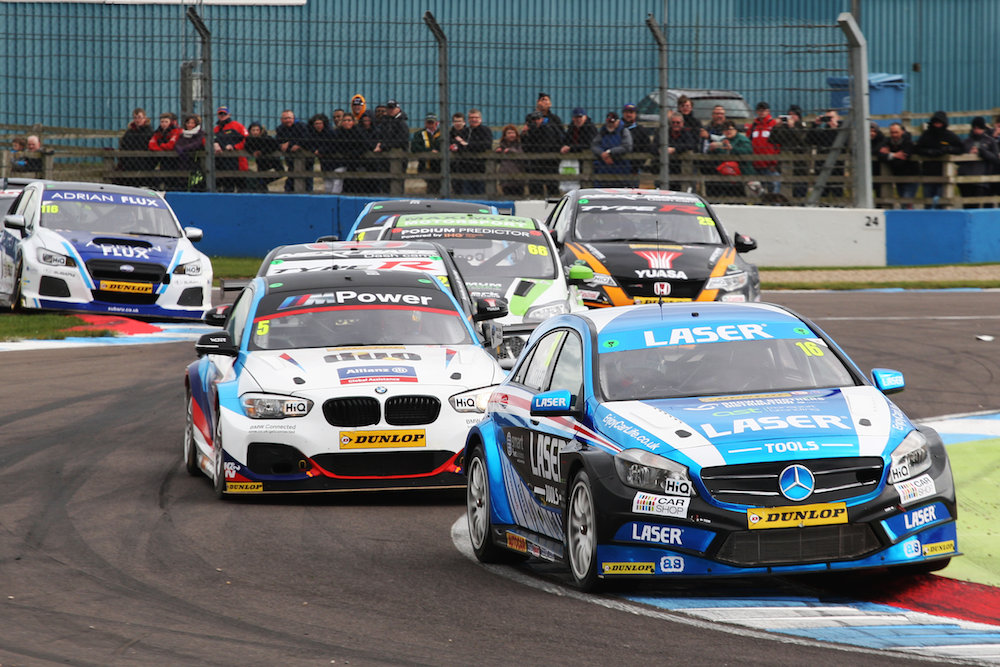 The mere sight of rain clouds often causes panic and more debate amongst teams and drivers, yet sheer pandemonium greets the precipitation and it was no different at Donington. Generally, the drivers hate rain and the fans love it because it makes the racing unpredictable and ups the ante of excitement. Race three was no different. Several drivers took the scenic route on the warm up laps and the race was stopped after a lap with cars strewn everywhere, including leader Matt Neal. It was, as a fan, brilliant to watch. It was, as a driver, a nightmare.

Why? These drivers are meant to be the best in Britain, yet some of them are calling for the race to be delayed, stopped and so on. Motorsport is dangerous, we all know that, but if you’re not prepared to play ball, don’t race. Similarly, the F1 drivers have a tantrum at the sight of rain. They are meant to be the best in the world. Yet, their former supremo, Bernie Ecclestone, even pondered the idea of fake rain via sprinklers to liven up the races. As a driver, the spray is obviously horrendous, blinding, but surely in 2017 there must be some technological advances somewhere to ease the problem in one way or another? Admittedly, there were small streams across the track, but again, remind yourself that these are supposedly the best drivers in Britain. Again, do we not have the technology to easy these problems? A lot of questions, I know, but it seems completely stupendous that we have to stop racing because it’s a bit wet.

One man who didn’t mind the wet conditions was Colin Turkington who inherited victory in the final race after Shedden’s disqualification. Turkington showed at Brands that he will be a serious contender this season and once again proved his challenge at Donington as he scored the most points of anyone in his rear wheel drive BMW on a track that supposedly favours the power at the front.

It will be vital for this season’s winner to be consistent as the field is so closely matched. Donington clearly highlighted this as there were constant battles all over the track and at the front, middle and back of the grid. These scraps involved trains of cars as they searched for an extra point and/or place in what was an excellent set of races across the weekend. This was the entertainment we turned up for and tuned in to watch. More of the same for the rest of the season? Yes, please!

Next up: Thruxton, 7th May

Championship standings after 6 races out of 30:

As noted, Billy Monger’s horrific crash in the Formula 4 support race was a reminder of how dangerous still is. A Just Giving page to support Billy on the challenges ahead of him has been created by his team, here. ESM has already contributed, but we would encourage anyone who feels passionate about motor racing to consider doing the same.